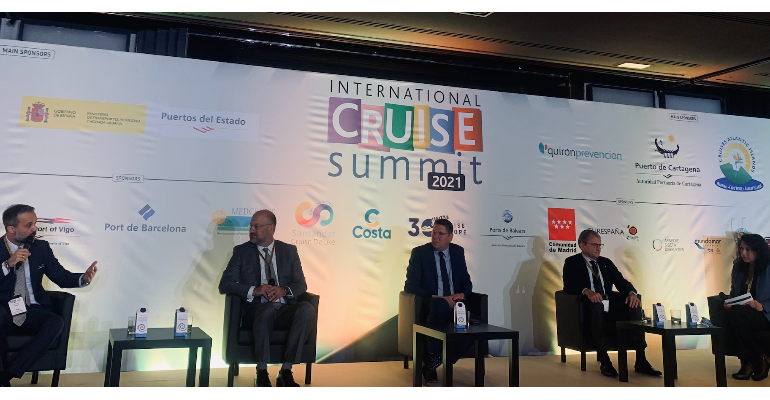 ‘There isn’t a silver bullet’ when it comes to achieving zero emissions, Costa Cruises President Mario Zanetti said, adding, ‘We have to make sure the energy will not be too expensive and will be produced in a sustainable way.’

He continued, ‘We will have to keep working and investing ... making sure the energy will be provided in a seamless way to the ships and a green choice will not be a trade off.

‘The energy must be produced in a greener way.’

The comments came on the first day of Madrid’s International Cruise Summit 2021 taking place November 17-18 during 'The Future of Cruising' session, with the Costa president going on to predict ‘a tighter relationship with shoreside stakeholders’ in the future ‘to make the whole chain more sustainable.’

Roberto Martinoli, president and CEO, Silversea Cruises shared Zanetti’s sentiment, telling moderator Virginia Quintairos, global business development director, Intercruises Shoreside & Port Services that there is still ‘no clear solution’ when it comes to fuel and generating power sustainably. He asserted that without focussing on sustainability, ‘You will not be able to raise money, you will not be able to grow.’ His recommendation was for the industry to pull together and ‘concentrate its efforts.’ Explained Martinoli, ‘To make things happen, it will take a bit of work - a financial investment that will have to be made… the biggest challenge is the allocation of energy produced.’

Despite Royal Caribbean Group having to suspend or postpone many of its projects, Ben Bouldin, VP EMEA Royal Caribbean Group said ‘It’s time to start planning optimistically’ stating, ’Slowly but surely we’re getting back up and running.’ This summer, 17 ships from various cruise lines sailed the UK with Bouldin commending the ports of Belfast, Liverpool, Kirkwall, Dover and Southampton for their role in the operations.

As well as referring to the deadline of becoming carbon neutral by 2050 as ‘the big challenge we’ve got to face,’ he pointed to other challenges currently facing the industry, including destination management. ‘Destination management is absolutely critical,’ he said, adding that it has to be ‘taken seriously.’

He urged support for Cruise Lines International Association (CLIA) for the successful delivery of health protocols, stating that these are ‘not something to compete on': ‘CLA is more effective and stronger the more participants it has,’ said the Royal Caribbean VP EMEA, claiming that it ‘will be critical in taking the industry as one’ into the future.

Pushing for workforce and cruise terminal development was Jonathan Daniels, chief executive and port director, Port Everglades who estimated a $20m cost per terminal for shore power. Receiving 50,000 people across eight terminals, there is the need to ensure power to cruise ships does not impact power to critical infrastructure, he said.

Predicting that load factors in 2023/24 will return to 100% on board cruise vessels, Daniels went on to address the obstacle of ensuring cruise terminals are equipped for handling passengers in the COVID-19 era: ‘Lenders are looking differently at ports,’ he said. ‘The lines are asking our terminals to do things they’ve never done before.’ He described the new need for testing laboratories, testing protocols plus facilities where those identified as having COVID-19 can be signposted. ‘We’re looking at technology five to 10 years in the future and condensing that timeframe.’

A lasting outcome of the pandemic, he concluded, has been that ‘competitors are now collaborators.'