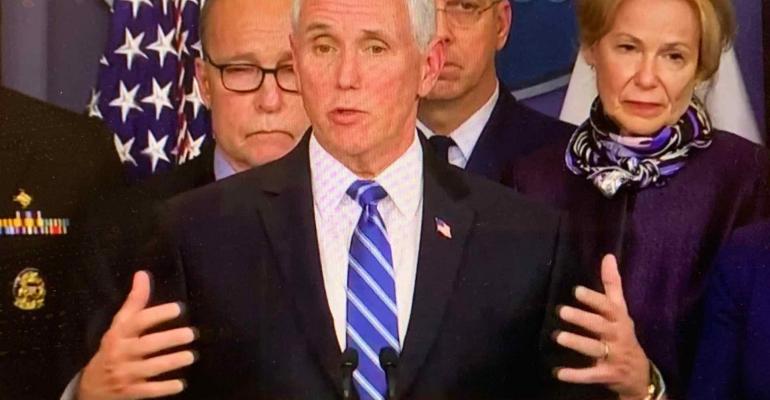 Screening, evacuation and picking up the tab

'The proposal includes advanced screening, improving medical services on ships, providing for airlift evacuation and land-based care at the expense of the cruise lines for anyone that might be infected, not only with the coronavirus but any serious illness,' Pence said. 'We'll be reviewing that in the next 24 hours.'

He added: 'The President's objective is for us to make cruise lines safer even as we work with the cruise lines to ensure that no one in our particularly vulnerable population is going out on a cruise in the near future.'

The US currently advises that 'older adults and travelers with underlying health issues should avoid situations that put them at increased risk for more severe disease. This entails avoiding crowded places, avoiding nonessential travel such as long plane trips and especially avoiding embarking on cruise ships.'

Secretary of Health and Human Services Alex Azar said the Grand Princess disembarkation at the Port of Oakland was 'progressing well.'

As of noon Tuesday, 548 passengers were off the ship, including 228 Canadians who had already been repatriated on a charter flight and Californians who had been bussed to Travis Air Force Base for their testing and quarantine. Twenty-six people who required treatment — only two of those were diagnosed with coronavirus on the ship — were also transported to medical facilities.

The goal was to get all the Californians ashore today and then the UK citizens. Work to repatriate other nationalities was under way. Non-California US residents will be going to Texas and Georgia quarantine facilities.

Pence reiterated that everyone from the ship will be tested and isolated.

US stocks rebounded on the Trump administration's proposal for considering economic stimuli including possible payroll tax relief and resources for paid leave so nobody has to go to work sick.

Cruise shares, hammered on Monday, rose on President Trump's vow to help the cruise and airline industries 'through this patch.'

During Pence's coronavirus task force update, a reporter asked about a 'bailout for tax-exempt cruise lines.'

The question went unanswered by National Economic Council Director Larry Kudlow, and the briefing was adjourned.