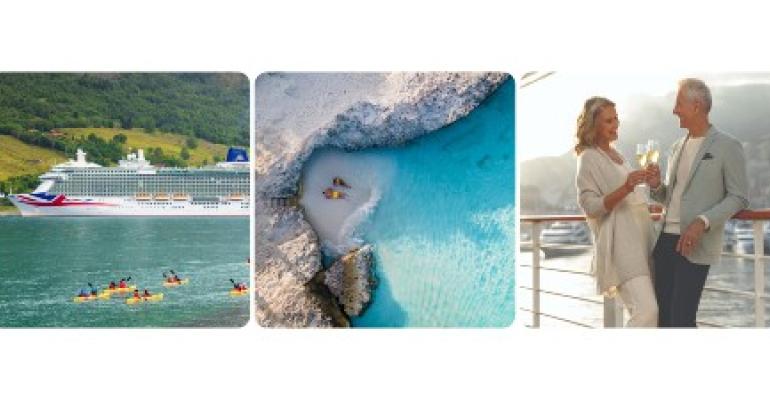 P&O Cruises on Wednesday reported its biggest booking day during a wave season, with four of its five top booking days falling in this 2023 peak selling period. The most popular itineraries have been the Caribbean, Western Mediterranean and the Norwegian Fjords.

P&O Cruises President Paul Ludlow attributed the record sales to the recognition of cruising's 'extraordinary value for money, which is critical at the moment.'

He continued: 'There are so many priorities for our hard-earned or hard-saved money in the current climate and a cruise offers an almost all-inclusive, individual holiday. This is clearly recognised by a new generation of cruisers with the Norwegian Fjords perennially popular for those trying a cruise for the first time.'

Oceania Cruises' 20th Anniversary Sale features up to $800 onboard credit per stateroom or suite in connection with 110 voyages across seven ships including the new Vista, set to debut in May.

Among the destinations: the Caribbean, Mediterranean, South Pacific, Alaska, Asia and beyond.

The sale will open for bookings from Jan. 16 through Feb. 28.

Each 20th Anniversary Sale fare includes the line's OLife Choice package (choice of free excursions, house beverage package or shipboard credit) plus the bonus of up to $800 on all bookings, no matter which OLife Choice amenity is chosen.

Examples of itineraries with $800 credit per stateroom or suite include the 18-day 'Fjords, Vikings & Castles' from Oslo to Porsmouth, UK, on Riviera, with ports up and down Norway plus the Faroe Islands, Orkney Islands and Newhaven (for Edinburgh) and 'Islands to Indochina,' 15 days from Singapore to Bangkok, also on Riviera. The cruise includes overnight stays at Saigon and Bangkok and calls at Borneo, Brunei; Puerto Princesa, Coron and Manila in the Philippines; and Vietnam's Chan May (for Hue) and Nha Trang.

Celebrity Cruises' buy one, get one 75% off

At Celebrity Cruises, the second person in a stateroom can save 75%. Plus, travelers can save up to an additional $800 per room, and get up to $200 per passenger to spend onboard.

The sale is available through March 1 and applies to most cruises operating now through April 30, 2025. The buy one, get one 75% off deal is for nonrefundable fares, while refundable fares offer 60% off the second traveler.

Sample itineraries include a four-night Key West and Bahamas cruise from Miami on Celebrity Summit, priced starting at $378, a 10-night Eastern Caribbean sailing, also from Miami, on Celebrity Silhouette, to Puerto Plata, San Juan, St. Croix, Antigua, St Kitts and St. Maarten at an average of $968 and a weeklong Mexican Riviera cruise from Los Angeles on Celebrity Solstice to Catalina Island with an overnight in Cabo San Lucas for $239.

Other Celebrity deals are available in Alaska, the Mediterranean (including Israel and Egypt), Scandinavia and Asia.

Costa Cruises North America's 'Seas the Day' promotion has fares starting at $499 per person and up to $500 in onboard credit per cabin.

Sailings covered by the promotion range from three to 22 days departing January 2023 through 2024. Ships in the offer include the line’s two newest — Costa Smeralda and Costa Toscana — as well as Costa Deliziosa, Costa Diadema, Costa Fascinosa, Costa Firenze and Costa Pacifica.

A reduced deposit of $100 locks in the rate, with free cancellation up to 30 days before departure. Government taxes and fees are additional.

Regent Seven Seas Cruises' ‘Upgrade Your Horizon’ dangles a free two-category suite upgrade and reduced deposits on more than 400 voyages through 2025, plus savings of up to 20% on 16 select European cruises.

'Upgrade Your Horizon' gives the chance to travel in a more spacious suite and additional advantages such as a free pre-cruise hotel night when elevated to a concierge suite, or butler service in a penthouse suite.

The double upgrade applies up to a penthouse suite, and a 50% reduced deposit is for residents of the US and Canada.

Bookings must be made by March 31. World cruises and grand voyages are not eligible.

Some 404 voyages through May 2025 are in the promotion, including itineraries to Africa, the Arabian Peninsula, Alaska, Asia, Australia/New Zealand, the South Pacific, Canada/New England, the Caribbean and Panama Canal, Mediterranean, Northern Europe and South America.