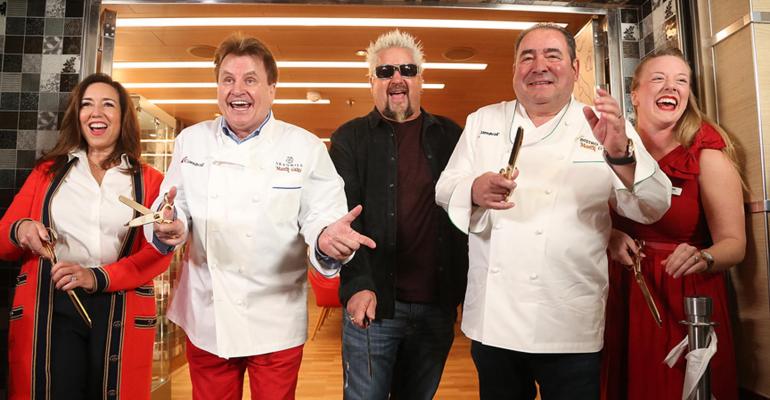 Capping the 133,500gt Vista class, Panorama is familiar to Fun Ship fans yet has new twists.

They include the line’s first culinary center, Carnival Kitchen, a sleekly contemporary space with nine marbled-granite cooking stations, each equipped with a sink, mini-fridge and stove top. Every station accommodates two people with tools, utensils and ingredients, while individual screens show closeups of the teacher’s workspace.

During Panorama’s recent inauguration at Long Beach, California, Carnival President Christine Duffy was joined by three noted chefs to officially open Carnival Kitchen. They included Guy Fieri, whose long partnership with Carnival is embodied in his Guy's Pig & Anhor Smokehouse Brewhouse and Guy’s Burgers on board.

Aboard Panorama, Lagasse and Sodamin hung out in the Carnival Kitchen while a class prepared apple pies. Ingredients were pre-measured for the students, and the session was lively and easy-going, with lots of camaraderie and banter. Sodamin even decorated one of the pies with a food face. Students made a note of their dining location for the evening and the pies were baked and served to them there.

Carnival Kitchen is tucked into what used to be the Club O2 space, adjacent to the aft restaurant on Deck 4.

Carnival decided to bring the kids’ areas together aboard Panorama, Chief Operating Officer Gus Antorcha told Seatrade Cruise News. Making way for the new Carnival Kitchen, Club O2 now takes up the bottom level of the space that was the IMAX Theatre on earlier ships. The upper two levels of the former IMAX space, Decks 7 and 8, hold the new Sky Zone. This created a spot for Club 02 on Deck 6, adjacent to Circle ‘C’ and the Warehouse Video Arcade.

Sky Zone’s first trampoline park at sea is a more than 3,000-square-foot space for jumpy fun, including blacklight glow parties and the chance to bounce above a basketball rim to experience the thrill of slam-dunking.

‘The agents I was with were ecstatic. They thought it was the coolest thing,’ said Mark Flager, sales manager, iCruise.com.

The stars-‘n’-stripes-themed Heroes Tribute Bar supplements Carnival’s military salutes on every cruise, providing a dedicated space decked out in regalia from the five branches of the US military and themed cocktails like ‘Green Beret’ and ‘Shore Leave.’

Taking its name from Carnival’s brand slogan, this newly named water park, endorsed by Carnival Chief Fun Officer Shaquille O’Neal, has a 455-foot-long Red Fun slide and a 300-foot-long Blue Fun slide. A 300-gallon PowerDrencher tipping bucket is part of the kiddie spray park, along with Carnival favorites like the SkyRide aerial attraction and a suspended ropes course, part of the SportSquare outdoor recreation area.

‘The water park for kids is fabulous,’ Flager said.

The retail space houses the line’s most expansive beauty footprint with interactive hands-on events, mini-makeovers and beauty workshops such as smoky eye tutorials and contouring classes as well as a shop dedicated to the launch of the line’s reimagined, fashion-forward logo merchandise collection.

‘We’ve partnered with brands that our guests love and have introduced new brands that are sure to become Carnival fan favorites,’ said William Butler, vice president of retail services for Carnival.

At the new ‘Beauty Bar’ on Deck 5, beauty specialists provide makeovers for a night on board or a special occasion. Top skincare, cosmetics and fragrance brands include Urban Decay, Dior, Estée Lauder and Clinique, among others.

Further offerings include the largest Effy jewelry assortment in the fleet, the first Carnival-branded inaugural collection, a ‘California Collection’ and new logo items. Here, too, are Carnival’s most expansive watch assortment and branded shop experiences with John Hardy and Swarovski, along with retail items connected to the Pixels Photo Gallery experience and shore excursions from Carnival Adventures.

‘Each ship we try to make a little different,’ Antorcha summed up.

That goes for the color scheme, too. While Carnival Horizon had splashes of orange, fuschia and magenta, Panorama’s colors are more subdued, and there are more wood veneers, particularly on the floors, some in marquetry patterns.

‘I was so impressed with the ship,’ Flager of iCruise.com said. ‘It’s just fun. That’s a cliché, but it is fun. There’s just so much to do.’