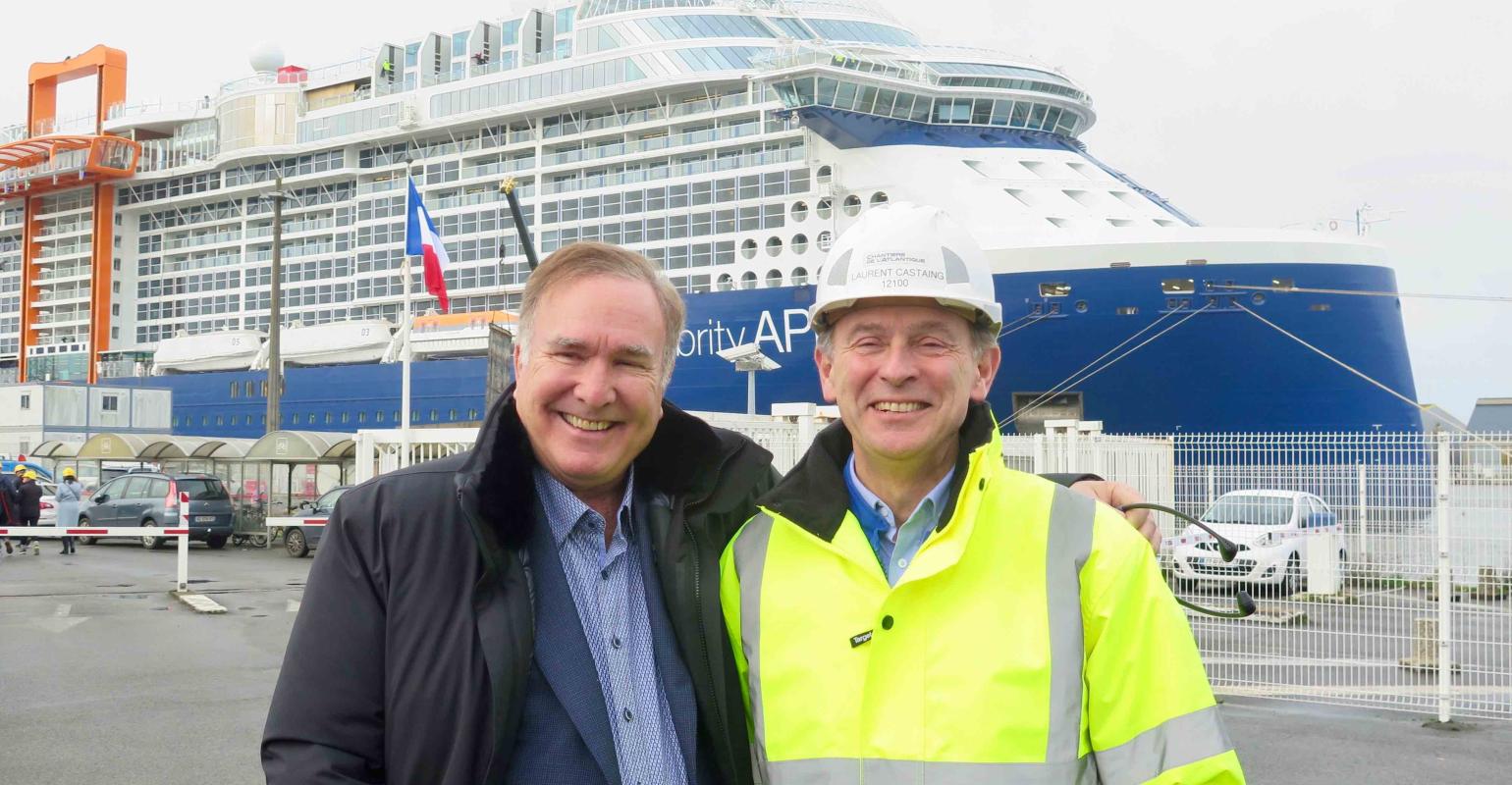 ‘With the second ship in a series, you take what you started and perfect it,’ said Harri Kulovaara, EVP maritime for Royal Caribbean Cruises Ltd. ‘We’re exceptionally happy with Edge,’ he added.

‘There was a lot of novelty, like the infinite veranda staterooms that required a tremendous amount of work, and other things that were not so visible. All of that has worked really well. There hasn’t been a huge need to do major changes. We have just tweaked Apex.’

For example, Kulovaara pointed to additional canopies and windscreens up on the Rooftop Garden.

As international media and travel partners saw during Tuesday's walk-through at Chantiers de l’Atlantique, where Apex is just weeks from delivery, the hardware is consistent with Edge.

‘Entertainment is the biggest change between Edge and Apex,’ said Celebrity’s Brian Abel, SVP hotel operations. Lisa Lehr, VP of entertainment, joined six months ago and has been transforming the shows and activities.

Lehr outlined three new productions for The Theatre, along with an arsenal of technology to make the performances more immersive and exciting. The tech includes 23-foot-tall, 4K LED screens that curve around the stage and a 28-foot-high circular scrim and eight Panasonic 20K laser projectors for projection mapping to create a 360-degree wrap-around picture.

The new productions include ‘Crystalize,’ which Lehr called ‘our eye-candy tech show,’ using lasers, aerial acrobats and an underwater ballet sequence made possible by that scrim and the projectors. A ‘feel-good show,’ ‘Tree of Life,’ revolves around a 20-foot tall ‘tree’ with more than 3,000 LED leaves. And ‘Rockumentary’ stars classic rock moments and lets passengers decide the finale by voting in advance on the Celebrity app.

As for The Club, in the evening it will present ‘Caravan,’ an intimate, cabaret-style production with new takes on classic circus acts. During the day, activities in The Club will range from DJ classes to archery competitions to karaoke with a live band and production support.

Eden, the triple-deck, glass-walled lounge at the back of the ship, will have a new theme each day, with daytime activities that carry through to the nighttime entertainment. For instance, an eclectic afternoon tea party morphs into ‘Night of Dreams,’ with live performances and audience interaction.

The changes came after Eden programming got mixed reviews on Celebrity Edge. ‘Some people didn’t connect with the whimsy of it,’ said Vicky Garcia, COO and co-owner of Cruise Planners. ‘It depends on the demographic. Some people felt it was too invasive. I loved it,’ she added.

When it comes to dining, Celebrity is ‘always upping their game,’ according to Garcia. ‘They want fresh ingredients, visual appeal and flavor. Cornelius [Gallagher, VP food and beverage] continues to be innovative.’

Gallagher revamped Eden’s menu with dishes discovered on his own travels to give a choice of 10 appetizers, 10 entrees and six to eight desserts. Everything will be based on flavor and local sourcing. For example, when the ship is on the Costa Brava, one dish could be fresh-caught carabiniero prawns. He’s empowering the chefs to withdraw items if they ever can’t get the primo quality they require.

Gallagher also came up with new signature dishes for each of the four main dining rooms, and the popular Fine Cut Steakhouse will be getting upgraded proteins.

A larger galley enables expanded offerings in Raw on 5, the seafood specialty spot, and the Magic Carpet, the movable, cantilevered platform that is the hallmark of the Edge series.

In Le Grand Bistro, a new storyline was developed for the 3-D tabletop animation, Le Petit Chef. And new items like grilled branzino will be added at the Rooftop Garden Grill.

The Craft Social Bar, which debuted on Celebrity Equinox, is coming to Apex, too. This casual spot offers draft cocktails, wines on tap and more than 50 craft beers served by a certified cicerone. Patrons can nibble on snacks like mac and brie, Kobe beef sliders or meat and cheese boards. Large-screen televisions will air live sporting events.

In Celebrity’s new collaboration with OneSpaWorld, the Kelly Hoppen-designed spa will gain new treatments for a total of more than 120 offerings, including an Iyashi Dôme, the original Japanese infrared sauna. A new Destination Wellness program will incorporate local ingredients from places the ship visits.

And a new Women in Wellness program will highlight practices by noted influencers like skincare icon and Elemis CEO Noella Gabriel; yoga master Katie Brauer, founder and CEO of The Yoga Professional; and Ruth Zukerman, co-founder of Soul Cycle and Flywheel Sports.

Thanks to its boutique style and flexible dining choices, Celebrity Edge brings in a lot of people who don’t cruise, according to Tawnee Sons, a Cruise Planners agent.

‘Edge gets great feedback,’ she said, pointing to its overall design aesthetic, the bigger bathrooms, the ease of tendering thanks to the Magic Carpet and the deluxe launches with their bucket seats. She sees improvements to Apex and thinks people who liked Edge will want to try the new ship.

‘I’m glad they’re trying to appeal to a broader market,’ said the head of another major retail group, who applauded Celebrity’s willingness to take risks when many lines simply play it safe.

‘You take risks, you learn and adjust,’ another travel advisor touring Apex agreed.

For Celebrity, that’s paying off.

‘You have to take risks,’ said Richard Fain, chairman and CEO of Royal Caribbean Cruises Ltd. ‘If you’re too afraid of the future, you’ll never make advances. I’m very fortunate I work with people who are willing to try new things and experiences, to innovate,’ he added.

Edge was a big departure in the premium market segment, where most brands figure if something’s good, why change it? Fain elaborated. ‘Edge was not just an incremental change but a step change. There’s no question is brought Celebrity many new customers.’

For her part, Celebrity President and CEO Lisa Lutoff-Perlo believes the Edge class is ‘starting to gain gravitas.' Agents are selling it. The sales and marketing are going strong.

‘Two is always better than one,’ she said.