Wonder of the Seas named in a splashy, teary spectacle at Port Canaveral 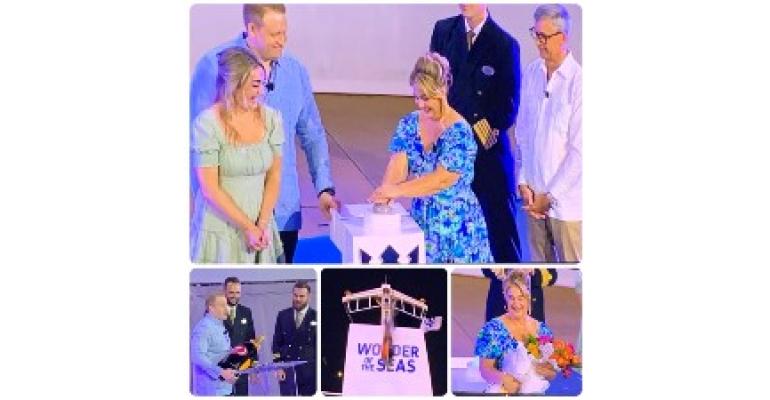 At top, 'Wonder Mom' Marie McCrea, with daughter Allie looking on, pushes a button to release the Champagne. Bottom left, Jason Liberty hefts the Salmanazar. A similar bottle was smashed, at center. At right, a bouquet for the godmother

A Junkanoo parade, high divers and bagpipers opened the spectacular naming festivities for Wonder of the Seas in the ship's AquaTheater Friday evening.

But it was 'Wonder Mom' — godmother Marie McCrea — who added the heart.

McCrea's indomitable spirit came out in a surprise video of how she'd cared for a severely disabled husband while also battling cancer and still managing to joyously raise three kids.

This brought tears to McCrea — and some naming ceremony guests.

Oh, and the McCrea family are cruisers— Marie and her late husband first sailed as a young couple on Royal Caribbean's Song of America.

He also singled out Alex Lockwood of Bluefields, Nicaragua, a member of Royal Caribbean's housekeeping staff since 1982, and the longest serving crew member on this ship of 3,200 crew.

'He's old, but not as old as me,' quipped Bayley, himself a former crew member with 11 years at sea. Bayley added he'd calculated Lockwood had served 1.4m guests during his shipboard career.

Richard Fain in the house

And Liberty in his acknowledgment included a shout out to 'our renowned chairman, my mentor' Richard Fain in the audience.

'If you look at every inch of this ship, you will see his fingerprints on it,' Liberty said.

Two burly ship's officers carried out a Salmanazar of Champagne — equivalent to 12 standard bottles — to show what was a fitting size to use for ushering in the world's largest cruise ship.

McCrea pushed a button, triggering the release of the actual naming bottle, which duly smashed on the hull.

Then showers of white confetti rained down on the AquaTheater crowd, where some of those in the front-row seats were a little damp after the splashy opening performance.