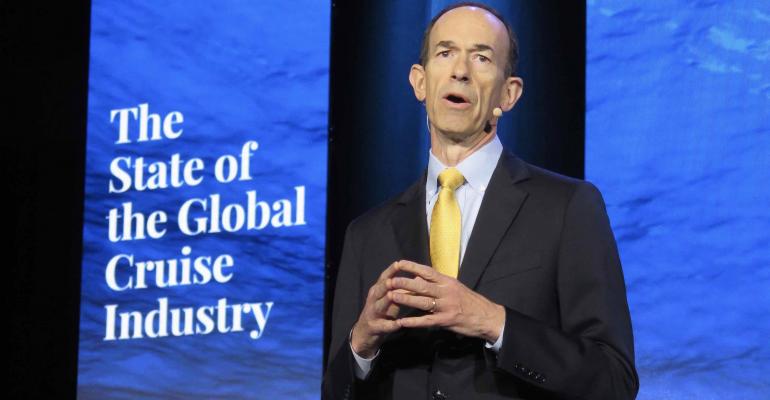 Adam Goldstein has left Royal Caribbean after 32 years, most recently as vice chairman, but will continue to chair Cruise Lines International Association.

In his CLIA guise he will be among the cruise leaders scheduled to meet with Vice President Mike Pence, who's in charge of the US response to coronavirus, on Saturday at Port Everglades.

'Adam has made countless contributions to our company since the day he and I first walked through these doors in 1988,' said Richard Fain, chairman and CEO, Royal Caribbean Cruises Ltd.

In a company memo, Fain outlined 'just of few' of Goldstein's notable accomplishments: electronic bookings of cruises for travel agents, expanding RCL’s marketing and deployment around the world, promoting cruises as active vacations for families, instituting guest-focused operating standards on board and bringing O3B bandwidth to the larger ships.

Throughout, Fain said, Goldstein has been 'the same leader and person we know today: wise, steady, focused on doing what is right and advancing our caring and ethical culture in word and in deed.'

'For all of us, working alongside Adam has been one of the privileges of the job,' Fain said.

As vice chairman since May 2018, Goldstein has spearheaded RCL’s global government relations and destination development efforts and represented the company in industry associations. Before becoming global CLIA chairman in 2019, he had chaired the Florida-Caribbean Cruise Association.

Goldstein is expected to complete his two-year tenure in the high-profile CLIA role. He previously chaired the association in 2015-2016.

Before that, he was president and CEO of Royal Caribbean International from November 2007 to April 2014, a challenging and dynamic period encompassing the development and introduction of the Oasis and Quantum classes.

A man for all seasons

Leading up to that job, Goldstein had held a wide range of positions — so many he was described as 'a man for all seasons' in a Seatrade Cruise Review profile. He led brand operations, total guest satisfaction (hotel operations), marketing and sales, and international.

An attorney, he had joined Royal Caribbean after work for Gotaas-Larsen, one of Royal Caribbean's three founding companies. He came to the cruise line as VP & corporate secretary before quickly taking on market development and then international sales and marketing — and just kept going from there.