Adam Goldstein looks back, and forward 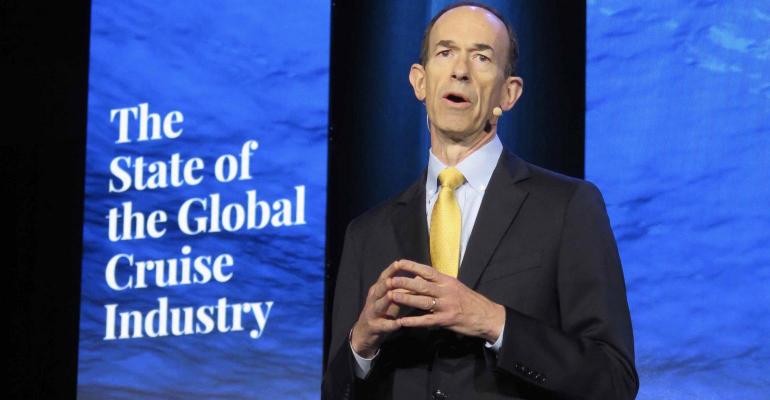 The toughest part of the past year was the 'trying to get a variety of actors to align around a way forward amidst ever-changing circumstances,' Adam Goldstein said

Adam Goldstein could have stepped down from the Cruise Lines International Association chairmanship in early March when he left Royal Caribbean after 32 years.

Instead, he stayed on as a volunteer — no pay — through what must have been the toughest tenure of any CLIA chairman in history.

'I love the business. I love what we do. I love what we mean for our customers. I love the careers we've created for our crew and our shoreside employees. I've always wanted to work toward doing the right things and making sure we're able to articulate our story,' Goldstein said in an exclusive interview.

'This has been the most difficult year ever, but I felt like I should be a part of trying to forge the industry's way forward and trying to make sure the industry's position is as well understood as possible.'

Now he's wrapping up his final days as his two-year term ends and a new chairman — to be announced — takes over.

Goldstein's confident CLIA is in good hands, with 'a lot of smart people there.' He's 'immensely' enjoyed working with CLIA President and CEO Kelly Craighead and the team.

The hardest part about the past year was the 'never-ending process of trying to get a variety of actors to align around a way forward amidst ever-changing circumstances.'

For months CLIA was continually asked about the new health protocols. During most of that time, the association was getting input on the science of the virus, the opinions of various experts and the views of the cruise lines' own medical experts and operations people, presidents and CEOs.

'People wanted to know more than either we were able to tell them or that we could tell them,' Goldstein related. 'Some things have to be worked through within the association before you speak publicly.'

Eventually, all this led to the agreement for universal COVID-19 testing, a way forward through the EU Healthy Gateways and European Maritime Safety Agency's protocols and the adoption of the Healthy Sail Panel's 74 recommendations and the US Centers for Disease Control and Prevention replacing its no-sail order with a framework for conditional sailing.

Getting consensus was no small task considering the diversity of CLIA's membership — from very large to very small companies, with very large and very small ships, and operations all over the globe. Add to that the diversity of interacting with health and safety agencies across Europe, North America, Singapore and China.

'There are so many different situations we're involved in, all at the same time. I credit the members for being flexible, for making adjustments as we went along and for the overall commitment to do the right things by people. But it wasn't easy. And I don't expect it to be easy for a while to come,' Goldstein said.

There were more Global Executive Committee meetings over the past 10 months than in his prior three years-plus as CLIA chairman (he'd chaired the association for a prior two-year stint).

'Kelly and I were constantly asking for the time of the GEC members in the midst of everything else they were dealing with. These are very senior business executives with tremendous experience in the industry. They're running huge companies with a lot of their own internal pressures and challenges. I'm very appreciative of the time they gave us.'

Cruise ships were closely linked with the pandemic early on, but Goldstein thinks much has been done to change public sentiment.

'Our research tells us the image of cruising has been consistently improving throughout the pandemic. It's fair to infer that some of the public steps we've taken around things like 100% testing, a multilayered approach and the 74 Healthy Sail Panel recommendations have contributed ... We've taken steps that no other sectors of travel have taken yet. We've voluntarily deferred our activity in a way that no other sector in the entire world economy has done.'

Most lines have deferred until after February — that's a whole year out of service.

And to the extent that some lines have sailed — on approximately 200 departures since July, carrying 150,000 to 200,000 passengers — the vast majority of people have stayed safe. Though the experience was different, people have enjoyed and appreciated it.

Goldstein's proudest that the industry has worked its way through all the learning to a robust and implementable public health approach. This has worked well in Europe over months. 'Given the nature of the challenge of the virus and the dynamic elements of the situation, I'm very, very proud of that,' he said.

Yes, Goldstein believes, in the way that 9/11 changed aspects of travel forever. And yet, in the almost two decades since then, until this year, travel exploded in volume and diversity and choices.

'There wasn't anything about the adjustments that occurred post-9/11 that interfered with the trajectory of travel growth and people's hunger to see the world,' he noted. 'The travel providers and the travelers are flexible and inventive, and they adjusted and they made it work.'

The same will happen now, with a differed public health approach to travel and cruising, but Goldstein's confident they'll resume their favorable trajectories. And should anything like this pandemic happen again, 'the world will probably be better prepared than it was before this year.'

The outgoing CLIA chairman had little to share about what's currently happening with the CDC process. He's pleased, though, there's now ample dialogue, mostly between individual member lines and the agency, and CLIA is facilitating dialogue between the smaller lines and CDC.

Figuring out all the ways lines need to adjust to sail again in a controlled and sequenced way will take time. Detailed guidance and feedback from CDC are awaited.

Pre-pandemic, CLIA was focused on strengthening critical relationships with ports around the world, especially helping very popular Mediterranean ports of call develop strategies to deal with their tourism flows.

When travel recovers, Goldstein hopes the industry will 'continue to play a leadership role,' working with destinations in places like Croatia and Greece to think through their sustainability, take inventory of their tourism assets and figure out what they really want from tourism in the future.

Post-CLIA, Goldstein is 'full of plans.' He's enjoyed building up investments in five small, private technology companies, some involved in the green economy. He serves on the board of one and the advisory committee of four. He's hopeful they'll do great things when it comes to addressing issues like the digital divide and reducing the carbon intensity of transportation.

He's had two ongoing not-for-profit involvements for years. One is the Energy Security Leadership Council, which he's stepped up to co-chair, succeeding FedEx founder, Chairman and CEO Fred Smith.

This is the leadership affiliate of Securing America's Future Energy, a Washington, DC-based policy shop that combines business leaders and retired four-star military leaders to advocate for reducing the economy's oil intensity. A huge focus is on electric vehicles, autonomous vehicles and 5G.

The ability to advocate for policies with former four-star military leaders like Gen. James T. Conway, the 34th commandant of the US Marine Corps, co-chair on the military side, is one of the greatest honors of Goldstein's career.

He's also on the board of trustees for INSEAD, the Business School for the World, where he earned his MBA. As the only US-based board member, he was involved in creating a presence for INSEAD in San Francisco early this year.

'I love all these things and I like to make a difference in whatever I do,' Goldstein said. Nurturing the fledgling technology companies is 'super exciting. I'm trying to dig in and add value.'

After he leaves CLIA, that will be the end of official ties to cruising, though he'll be available to help Craighead and the industry if he can.

One of the things Goldstein's enjoyed most in his cruise career is establishing Royal Caribbean International's global sales and marketing network with all the international representatives and offices.

'I just love being with people from around the world,' he said, 'so who knows what that will lead to?'