Andy Stuart looks back, and forward 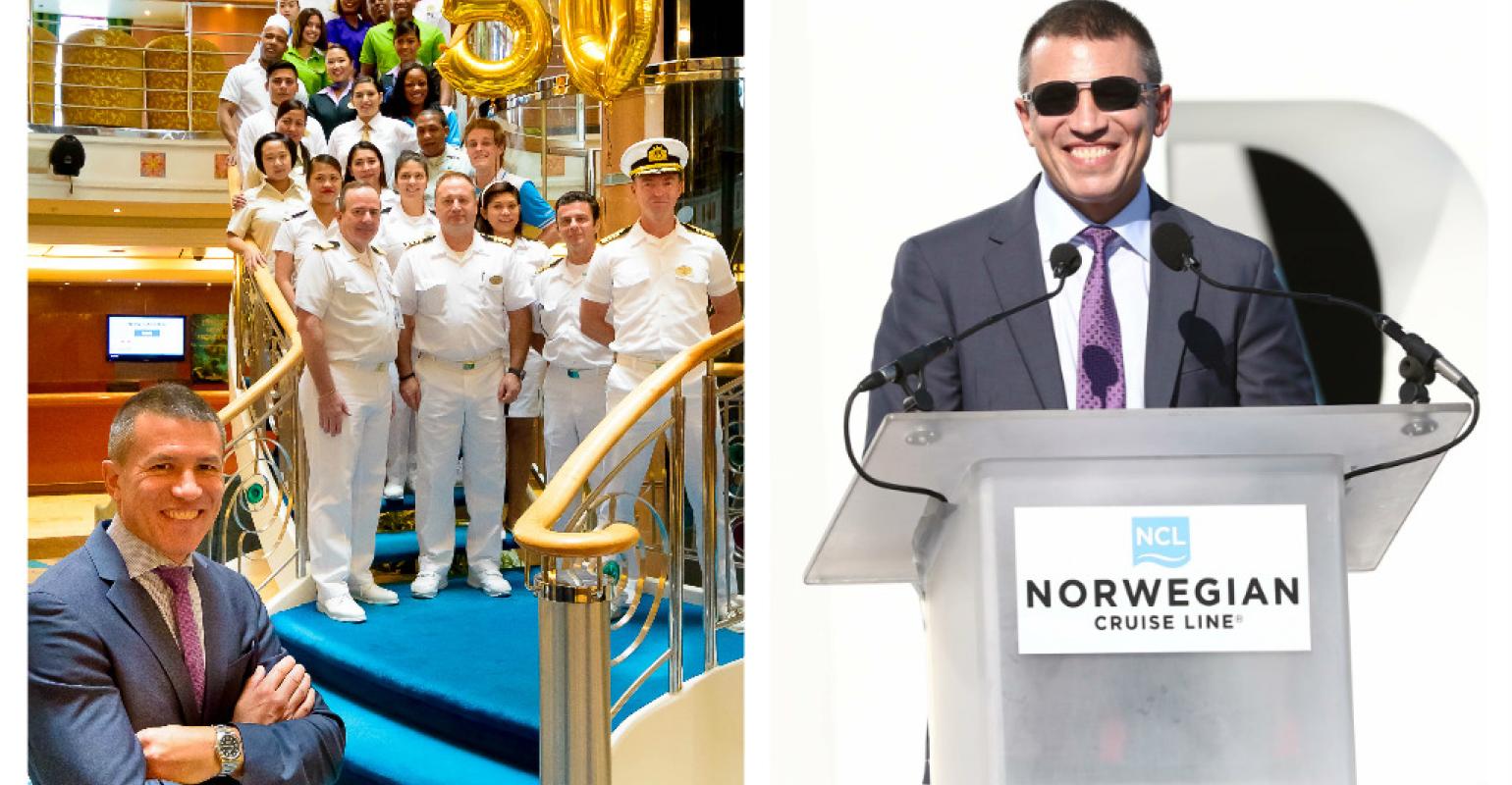 Seaward had just come into service in 1988 when Steve Odell hired Stuart as a sales manager for NCL’s UK team. He rose to lead UK sales, eventually adding Continental Europe, then was promoted to VP sales in Miami, and continued through SVP and EVP roles over passenger services, sales and marketing, He also had a chief product officer gig.

NCL has had more than a dozen presidents. When Stuart got the mantle in 2015, people cheered. He soon became CEO, too.

His announced departure at year’s end leaves colleagues, employees, travel partners and competitors trying to imagine NCL and the cruise industry without one of its leading lights.

Over three decades, Stuart feels he’s made the most impact in the people area.

‘I’ve had the privilege of working with great people. Some I’ve brought in. Many are still here. Some have spread across the industry. I hope I’ve had an influence on the people that really shaped the industry and will continue to take the industry and the brand forward in a really exciting way,’ he said.

NCL was often described as the ‘smaller brand that punched above its weight.’ According to Stuart, that came down to ‘rallying a team and getting the most out of our people. If we all do what we’re capable of, the total is greater than the sum of the parts.’

What he’s learned as a leader is that ‘People are the most important and the hardest thing we do. Learning how to get the most out of people, how to build the relationship and understanding what motivates different people is ever so difficult.

‘People never cease to surprise me, both in a good way and sometimes not. And helping people maximize their opportunity is something you really do learn over time.’

Speaking of people, keeping NCL’s partnership with travel agents strong is one of Stuart’s top accomplishments.

‘So many I’ve worked with a long time. I’ve had a close relationship with the people who drive the business, a great passion of mine,’ he said. ‘It’s a side of the business I’ve really enjoyed.’

He’a also been instrumental in developing the brand.

Stuart doesn’t take credit for Freestyle Cruising, but he was part of the team at the time that shaped what NCL did on board and he told the story to the trade and consumers.

The concept of dining when and where you want is a given now. But implementing Freestyle Cruising on Norwegian Sky in 2000 was one of the most challenging tasks Stuart recalls.

‘We assumed a lot when we launched. We underestimated how powerful the industry message was [about two-seating dining}. It was a communications learning curve.’

Stuart was excited for NCL to make what would be a huge change from the traditional, rigid regime. ‘To me it was obvious. On the cruise you wouldn’t have to eat at 6:30 or 8:30, and we weren’t going to choose your dining companions,’ he said.

'I wrote a letter: "Fantastic news! This week there's no need to sit in first or second seating. You can dine when you want." The reaction was horror. There was uproar on board.’

So he drafted a new letter for the next cruise: 'Great news! This week you’re on late seating or early seating. However, if you want to move to early or late, or you just met friends at the bar that you want to dine with, you’re free to do that.”’ The reaction was much better, and over time people enthusiastically embraced Freestyle Cruising.

Another major challenge: ‘The early years in Hawaii. It took a lot for us to come out the other side stronger.’

Norwegian Star was sailing seven-day cruises that made a long trek to Fanning Island, Kiribati, to satisfy US cabotage. Demand was extraordinary, and the company embarked on a bold strategy to operate US-flag ships in Hawaii that wouldn’t require the foreign port call. Special legislation enabled NCL to complete the Project America newbuild in Europe and reflag it to the US, and Pride of Hawaii and Pride of Aloha were cleared to operate domestic cruises, too.

It turned out the task of hiring, training and retaining enough US crew and the steep cost of operating under the US flag were too much. Pride of America's sinking in the shipyard was a tremendous setback.

The heavy losses in Hawaii led to an opening for private equity firm Apollo Management to take a 50% stake in NCL, however Apollo excluded Hawaii from the deal. The Hawaii operation was reduced to one ship, Pride of America, which ultimately became a very profitable business.

Private to private equity to public

Going from a private enterprise to the private equity investment, which happened in 2007-08 at the height of the recession, then to a public company was all a ‘tremendous learning curve’ for Stuart.

In 1987, right before he joined, there were plans for an IPO. Carnival had done it, but NCL’s timing was off: Black Friday squelched it. There was a period when shares in parent company Kloster were traded on the Oslo Stock Exchange.

NCL’s very successful 2013 public offering in New York was a thrilling achievement. Then came bringing together Prestige Cruise Holdings and Norwegian in a three-brand holding company.

‘It’s been fascinating being part of that whole journey,’ Stuart said.

Ship festivities, from edgy to emotional

Ship introductions have been a highlight. One of Stuart’s favorites was Norwegian Dawn’s in New York, the first time a naming ceremony was held in an NCL ship’s theater. Kim Cattrall of ‘Sex and the City’ was the godmother, and she bawdily straddled the giant lever she needed to pull to release the bottle of Champagne.

‘We gave everyone drumsticks. The atmosphere in the theater was electric, and Kim Catttrall was a little edgy,’ Stuart recounted. ‘It was a really exciting event and a great atmosphere.’

One of the most emotional moments was Norwegian Escape’s 2015 christening. Stuart had just been named president after 27 years with NCL and it was the first time he spoke at a ship inaugural. The festivities at PortMiami were planned for a ‘nice, cool November afternoon,’ which turned out to be boiling hot.

‘It was the hottest I’ve ever been in a suit,’ Stuart said, but an extremely gratifying event. ‘I was looking out at 3,000 people. Out came Pitbull [the godfather]. My wife and kids were in the front row.’

2018’s Norwegian Bliss was a standout, too. ‘I loved Bliss. Elvis Duran [the godfather] and his team were great partners.’

So, now, having just taken delivery of Norwegian Encore in Germany this week — the third newbuild Stuart accepted on the company’s behalf, following Norwegian Joy and Norwegian Bliss — he is amid what must be a familiar flurry of inaugural events. Currently he’s on the ship in Europe. And New York follows, culminating with the naming by singer Kelly Clarkson on Nov. 21 in Miami.

Handing the reins to Harry Sommer

It surely will be a bittersweet occasion for Stuart who, at year’s end, hands the reins to Harry Sommer, his successor as president and CEO.

They’ve worked together for a long time.

‘I’m super-excited for him, to hand my reports over to Harry,’ Stuart said, ‘He’s going to do a fantastic job. He’s extremely bright. He’s passionate about the brand and the business. I feel very comfortable heading off to my new life, knowing the brand is in good hands with Harry. And with Frank’s [Del Rio} wisdom, it will do so well.

‘I will be an enthusiastic observer, watching the brand go from strength to strength.’

Stuart expressed huge gratitude to Del Rio, CEO of Norwegian Cruise Line Holdings. ‘He gave me this opportunity shortly after he took over. For me to start the way I started and finish in this role, I owe a debt of gratitude to Frank. It’s been great.’

Everyone is eager to know what's in store for Stuart, 56.

‘As of now, I’m planning to take a break,’ he said. In 31 years with NCL, he never had more than two weeks off, so he’s looking forward to some R&R — and being away from email.

Plenty of trips are coming, to see his mum in England, wife Allison’s mom in Colombia and a sister-in-law in Spain. An avid windsurfer, Stuart has booked kite surfing classes at home in Miami, and looks forward to improving his golf game with his son.

As for professionally, Stuart has no specifics to share, and said only: ‘I am pretty sure I will be involved in something.’