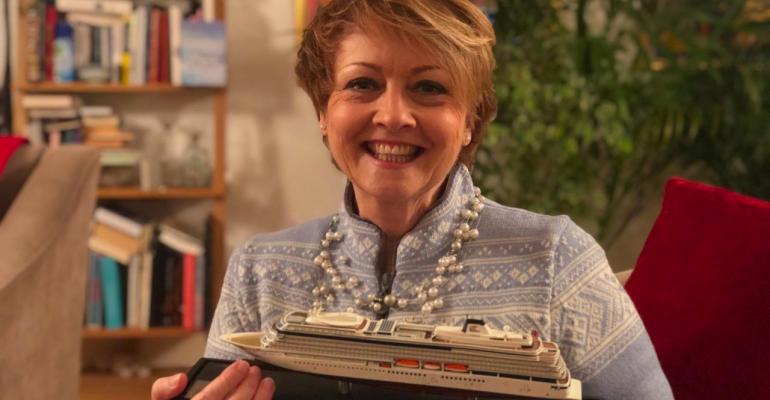 Anne Diamond has been a key figure on Viking’s enrichment channel, Viking.TV, which went live in March

The 930-passenger vessel is nearing completion at Fincantieri's Ancona yard, with delivery scheduled this spring.

Diamond is best known for her pioneering work on UK morning shows in during the 1980s, along with a legendary career in frontline television that has lasted for more than 40 years. From the fall of the Berlin Wall, Australia’s bicentenary and the wedding of Prince Charles and Lady Diana Spencer, to interviews with Bette Davis, Ronald Reagan, Margaret Thatcher and Prince Philip, Diamond's journalism has made her a household name.

In 1991, she pioneered the 1991 UK cot death campaign, following the death of her own son, Sebastian. Diamond is the only non-medic awarded the Medal of the Royal College of Paediatrics and Child Health.

Diamond's Thursday livestreams will continue in 2021, with upcoming guests in January to include former NASA astronaut Kathy Sullivan, who has made history as the first American woman to walk in space and the first woman to reach the deepest part of the ocean, and Sir Michael Palin, the legendary British actor, broadcaster and writer.

The interviews are available on demand here.

'Since the day we paused operations, Anne immediately volunteered to help our guests and crew manage through this period of uncertainty,' Viking EVP Karine Hagen said, adding that Diamond's Viking.TV work has brightened the days of nearly two million viewers.