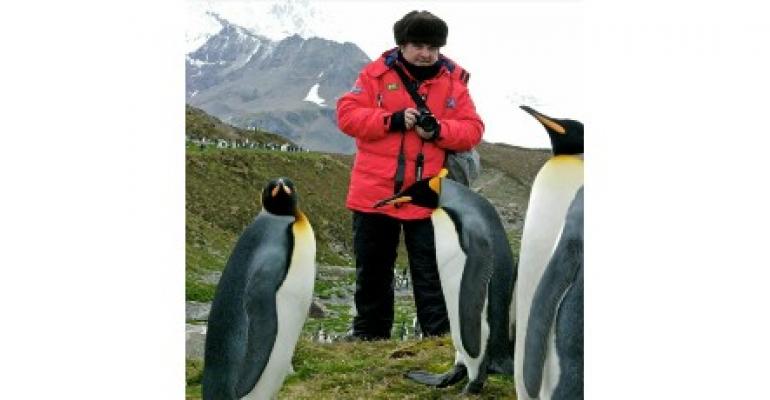 Ricardo Marengo photographing emperor penguins on one of his cruise adventures
A Buenos Aires cruise terminal lounge has been named the Ricardo Marengo Salon in a tribute to the late Argentine cruise journalist.

The commemoration took place Nov. 5, one year to the date of Marengo's death at 58.

Marengo was known as el capitán of Noticias de Cruceros, which he founded and built into a leading source of cruise news in Spanish. He was greatly respected internationally for his knowledge, dedication and passion for cruising.

A plaque with his name was unveiled in the terminal, along with a display case containing Marengo's 'cruise collection,' donated by his widow Lucila Patti de Marengo.

Noticias de Cruceros' Willy Gatti said this homage to Marengo could not be better. The lounge, he noted, is often used for VIPs.

'And Ricardo was a true VIP, a bon vivant. He enjoyed his cigars, his whiskeys, his travels, he enjoyed life. And he was a VIP especially for the industry, in the literal sense of the word: a very important person because I can't think of anyone more important than him in spreading information about this beautiful way of traveling,' Gatti said.

In his own note of tribute published in Noticias de Cruceros, Sebastián Montero, executive director, Southern Cone Ports Corp., imagined Marengo creating a 'Celestial Cruise News,' adding: 'My friend, you do not know how much we have missed you, especially in the most difficult stages that the cruise industry has had to overcome, because surely today you would be leading and motivating us all, using your communication platforms to execute all the necessary actions in order to recover this important activity for our countries and their people.'