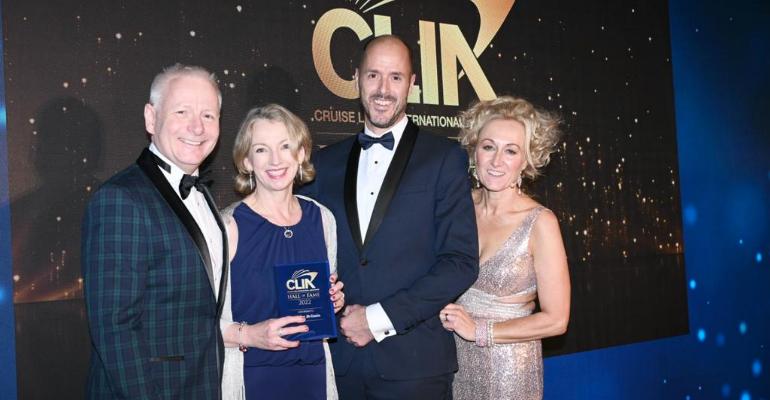 Cruise Britain, plus Catriona Parsons, head of cruise commercial at Hays Travel and Edwina Lonsdale, MD for Mundy Cruising, are the first to be inducted into Cruise Lines International Association (CLIA) UK & Ireland’s Hall of Fame.

‘Many congratulations to our first ever Hall of Fame inductees,’ said Andy Harmer, MD for UK & Ireland, Cruise Lines International Association. ‘It is a privilege to work in an industry with such inspiring contemporaries and we would like to thank them for their incredible work and vision.’

He added, ‘It is a tribute to our winners that their organisations, and indeed the wider cruise sector, have finished the year in such an encouraging position. They should all feel enormously proud of their accomplishments.’

The Hall of Fame will now be a regular fixture that is awarded during the association’s annual winter ball - the occasion where this year’s honours were revealed.

Cruise Britain’s award was presented by Rob Scott, VP sales & marketing, P&O Cruises. The organisation was commended for 'shining a light on the benefits of inbound cruise tourism, as well as cruise holidays that start in the UK.' It was also credited with developing a 'special relationship' with CLIA, that has spearheaded and supported a 'range of new partnership initiatives across the cruise ecosystem, that have helped maximise the economic and social benefits of cruise tourism, and to foster a successful and sustainable industry.'

A leading advocate for cruise retail

Catriona Parsons was recognised for being 'one of the leading advocates for cruise within retail businesses that are well represented on the high street.' She was praised for her 'can-do attitude, resilience and belief in cruise holidays' and 'growing cruise as a proportion of Hays' holiday business via an innovative approach, engaging their internal team as well as the entire cruise industry.' Her award was presented by Jo Rzymowska, VP and MD EMEA, Celebrity Cruises.

An ambassador for cruise

Hailed as a 'visionary in the industry and in cruise retailing' was Edwina Lonsdale, for 'taking her business from strength to strength and being a true ambassador for the whole of the cruise community.' Her success was attributed to 'hard work, expertise, building relationships across the cruise community, and on providing a dedicated service that treats every single cruise holiday, and every customer, as something very special.' The award was presented by Bernie Carter, MD & SVP, Oceania Cruises.