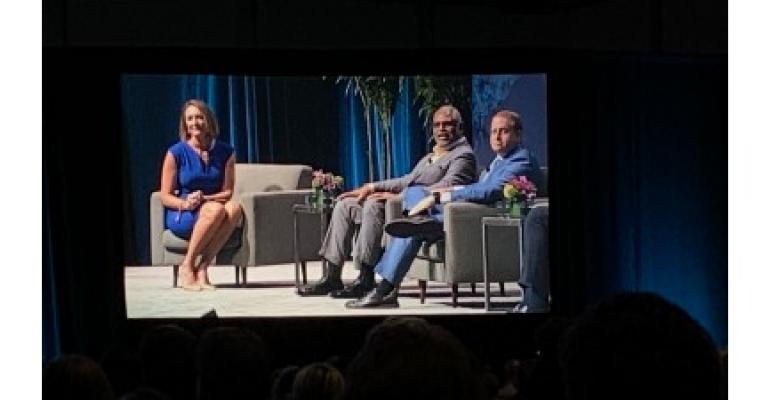 Arnold Donald, left and Jason Liberty were side by side on Seatrade's State of the Global Cruise Industry panel. At left is moderator Lucy Hockings of the BBC

Side by side on the State of the Cruise Industry keynote stage, fellow CEOs Arnold Donald and Jason Liberty were a portrait of leadership in transition.

Just minutes before, it was announced Donald will be succeeded at Carnival Corp. & plc in August by Josh Weinstein, while Liberty was appearing for the first time on that keynote stage since succeeding Richard Fain at Royal Caribbean Group in January.

Seatrade Cruise News spoke one-to-one with both Donald and Liberty immediately after the keynote.

Donald's proudest of 'the people'

'It's always the people,' he said. 'Developing the people and, through our growth, providing the number of jobs we do. That has multiple effects. I'm also proud of advancing the environmental and sustainability goals and diversity and inclusion.'

Liberty had praise for Donald.

'He has been an incredible leader in the industry, at Carnival Corp. and he was also a leader of CLIA for many years so he's an A-plus player focusing on doing the right thing,' Liberty said. 'I'd love for him to continue on, and I'm happy he'll still stay in that vice chairman capacity.

Liberty and Weinstein have known each other for some time. Liberty, 46, has been with Royal Caribbean for 17 years while Weinstein, 48, has had 20 years at Carnival.

Groomed for their roles

Liberty said of Weinstein: 'He's done a lot of great things inside that company and I think he's well-prepared, similar to how I was groomed for this position. They have groomed Josh with intent.'

Weinstein started in legal, moved to finance and became treasurer, led Carnival UK (P&O Cruises and Cunard) as president and then became chief operations officer, his current role, taking on many of Donald's former direct reports.

At Royal Caribbean, Liberty started as head of audit, strategy and planning, holding 'pretty much every finance role there was' until advancing to CFO then adding brand responsibilities for Silversea, TUI Cruises and Hapag-Lloyd Cruises,

'The more experiences one can get prepares you in that journey,' he said.

As for being on the State of the Global Cruise Industry keynote stage at Seatrade Cruise Global Tuesday, Liberty said he was 'very honored to have the opportunity. It felt very natural to me.'

See the latest issue of Seatrade Cruise Review, just out, with a '10 to watch' feature including Weinstein and Liberty among the rising industry stars.