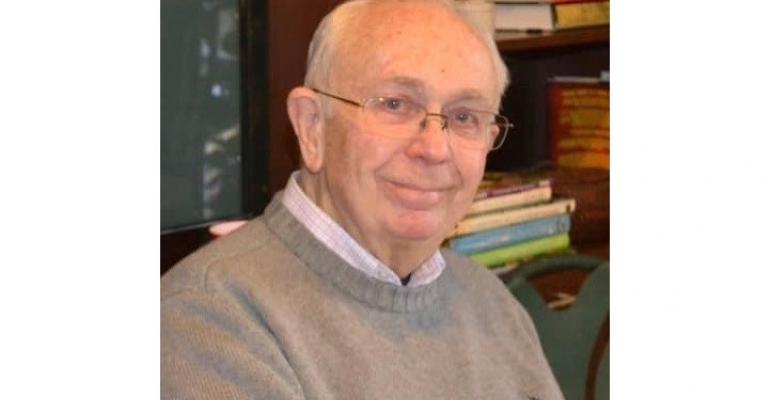 David Christopher, a mentor to many sales executives, was 'liked and loved by all,' according to colleague Ron Kurtz

Christopher died in Port St. Lucie, Florida, where he and wife Ines retired several years ago.

Revered as a mentor

'David was one of the kindest, smartest and most generous people I have ever known,' said Mark Conroy, managing director, the Americas, Silversea Cruises. 'Without his mentorship at NCL and partnership at Commodore, I am not sure I would have enjoyed the success I have enjoyed.'

'David was very special,' said Roy Grimsland, another cruise executive whose talent was spotted early on by Christopher. 'He looked out for others. He would go out of his way to help people professionally.'

His daughter Carol thinks passenger services was 'dear to his heart because he was helping people and making sure they had the best experience.'

Grimsland recalls how, aboard the 'nightmare' trans-Atlantic shakedown crossing of the Norway, the former ocean liner France that NCL brought into Caribbean cruising, Christopher was 'at his best. He always tried to make it right for the passengers.'

Christopher himself was proudest, though, of his mentorships and what the people he hired or promoted went on to accomplish.

Grimsland was an entry-level reservations agent at NCL four decades ago when Christopher advanced him to manager of passenger services.

'He gave me that first shot,' Grimsland said.

Ron Kurtz, who led NCL's sales and marketing as SVP at the time, hired Christopher as director of reservations in 1980, his second round with the line.

'He worked all hours of the day and night,' Kurtz said. 'That was helpful when we introduced the Norway into service as we went months trying to develop an accurate inventory of cabins and dealing with mechanical problems that put a real burden on reservations. Dave was a very kind and amiable person. He rarely showed the stress he was under.

'He was a real pioneer in the industry and was liked and loved by all.'

Conroy echoed Kurtz's observation that Christopher was a 'tireless worker,' adding that he was firm but always soft-spoken. At NCL Christopher recruited the youthful Conroy to director, group sales, inventory control and guest relations.

'He was a great mentor and with his help we modernized the systems, launched the Norway and fixed its category allocation, all before personal computers,' Conroy said. Christopher managed the Sea Saver program Kurtz created.

Conroy went on to Royal Viking Line before being recruited as president of Commodore. Christopher was already there heading sales, marketing and passenger services, and they worked together to turn the business around.

From the airlines to cruising

Christopher was born in upstate New York, grew up in Florida and graduated from the University of Miami where he studied business and marketing. He first worked for the airlines — TWA, Eastern, Texas International and Air Atlanta — which took him to posts in New York, Chicago, Miami and Atlanta — before moving into cruise sales.

In 1973, Bruce Nierenberg had just become a sales representative for Eastern in Chicago when he got to know Christopher, who had an important job in the airline's Miami home office. NCL was after Christopher to take over Midwest sales for the cruise line in Chicago.

'If he did not give them my name, I probably would have ended up in the airline business,' said Nierenberg, who went on to become EVP at NCL, then president of SeaEscape/Scandinavian World Cruises, Premier (which he co-founded), Costa North America, Delta Queen Steamboat Co. and Victory Cruise Lines.

In the mid-1970s, Nierenberg got Christopher to join NCL to run sales.

'He was part of one of the most incredible groups of people who ever worked in the industry,' Nierenberg said. 'There were so many new products and concepts coming out that today remain as important parts of the industry. Dave was a big part of that.'

Christopher was known for keeping in touch with colleagues, who became friends. For years, he organized reunion dinners for a core of folks who worked together at NCL. He also was an avid fisherman and enjoyed tooling around in his little pontoon boat in South Florida.

After retiring from Costa in 2005, Christopher served as an adjunct professor at Johnson & Wales University in Miami, teaching cruise operations management to students in the college of hospitality.

Besides his wife of 28 years, Ines, Christopher is survived by daughters Carol Christie of Cartersville, Georgia, and Kelley Barlow of Miami; first wife Jeanie Christopher, a sister, a niece, a nephew and five grandchildren.

A celebration of life is planned at the Church by the Sea in Fort Lauderdale after the coronavirus pandemic is over.