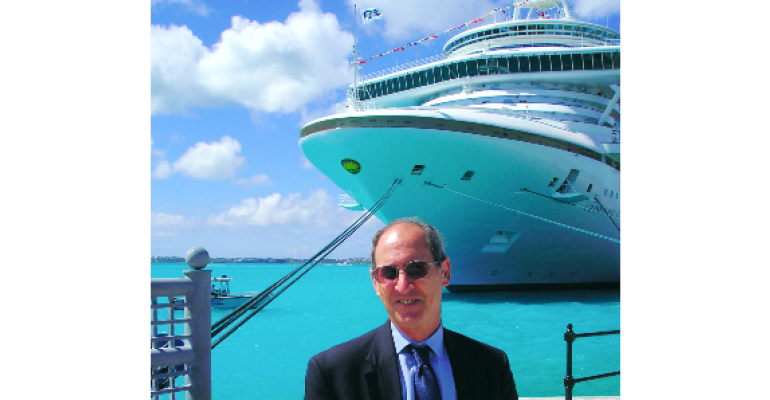 Larry Jacobs was involved in planning that included the development of a new cruise pier and infrastructure improvements at the Royal Naval Dockyard, pictured here
Larry Jacobs, who helped shape Bermuda's cruise ship and transport strategies, paving the way for growth with newer, bigger ships, has retired from the Tourism Authority.

'The cruise ship strategy is now well-established, with cruises to Bermuda in high demand, an infrastructure capable of providing a high-quality experience and a great relationship with our cruise line partners and the homeports,' Jacobs said.

Jacobs served as a single point of coordination to ensure all elements of the strategies were accomplished on time and according to plan. He's proud of his role in developing the strategies in coordination with government departments and local entities, cruise lines and homeports along the US East Coast, and overseeing their implementation.

'Larry has been a consistent partner in Bermuda with great insight into the industry and a strong supporter of cruise in Bermuda,' said Chris Allen, VP deployment and itinerary planning, Royal Caribbean International and Celebrity Cruises.

According to Silversea Cruises' Mark Conroy, managing director, the Americas, Jacobs was 'always a pleasure to work with and really helped bridge the political gaps in Bermuda.'

'He is a good friend, a great character and a consummate professional who has guided cruise tourism forward in Bermuda over many years. His counsel will be missed,' said Mark Ittel, SVP ports and maritime for Bermello, Ajamil & Partners. He has known Jacobs more than 20 years, including when BA was involved in some of the major projects of the Bermuda port master plan, the new cruise berth at the Royal Naval Dockyard and other studies.

During Jacobs' tenure, the major change was transitioning from a strategy that relied on the older, smaller ships capable of docking at Hamilton and St. George’s to one of accommodating the larger, newer ships that were cruising's future. After consultation with government and private sector entities and cruise lines, it was decided the big ships would go to the Royal Naval Dockyard in the west end, while smaller ships would continue to use Hamilton and St. George’s.

This strategy required the development of a new public and private transport system, including a high-speed ferry system, expansion of the public bus system and expansion of privately operated transport options. It also entailed a new cruise pier and infrastructure improvements at Dockyard.

The new Heritage Wharf opened in May 2009 and all public and private transport improvements were also implemented.

In 2014, he left the government and joined the newly formed Bermuda Tourism Authority. Responsibility for the cruise ship strategy was transferred to the Authority.

Having retired, Jacobs and his wife Sharon plan to spend time visiting friends and family in the US and beyond, including resuming overseas travel as the pandemic recedes. Part-time consulting in Bermuda or elsewhere are also possibilities.