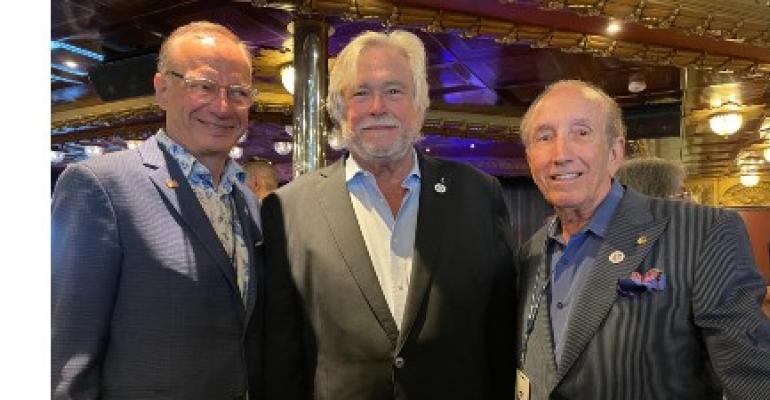 Fifty years ago today, Carnival Cruise Line got off to an inglorious start when, on its inaugural sailing, Mardi Gras grounded in the PortMiami channel.

March 11, 1972. Micky Arison, who was on the bridge wing, remembers the sand flying. 'I knew that was not a good sign,' he said wryly. 'We had no other choice but to open the bars and have a party.'

Now that sounds like the Fun Ships — as they came to be known some years later.

Meanwhile, Micky's father Ted, Carnival's founder, never left the bridge, and together with operations boss Mike Zonis on shore worked feverishly to get Mardi Gras off the embankment. It took 24 hours. A barge offloaded fuel, lightening the ship.

'It was front page news all over the world: "Mardi Gras on the rocks,"' Arison said. Actually, the ship was on the sand, he noted, and wasn't damaged.

'No way in hell we're going to survive'

'At the time, I thought there was no way in hell we're going to survive,' Arison continued. 'We've got this old ship. We've got no money to put her in any condition and we're competing with the smaller but relatively new ships of NCL and Royal. For a couple years, it was nip and tuck whether we would survive. By the third year, we started to create enough business to get positive cash flow and started to look for a second ship.'

And the rest is history. Carnival grew into the world's most popular cruise line, and the corporation that sprang from it under Micky Arison's leadership became a global powerhouse.

Carnival has been holding Sailabrations on its ships to mark the 50th birthday. On Friday, Arison and some key figures at Carnival past and present gathered aboard Carnival Conquest at PortMiami for festivities.

'I got goose bumps. I got a little emotional,' said Maurice Zarmati about walking up the gangway. It's been three years since he boarded a Fun Ship, and it hit him: 'I'm here for the 50th birthday.'

It has also been 50 years of Zarmati's life. One of the original Carnival team, he started in 1972 as Southeast regional representative and ultimately became VP worldwide sales, before going on to lead Costa North America as president/CEO. Actually, his ties to the Arisons go back earlier, to 1970 when Zarmati was hired by Ted at Arison Shipping, one of the founding partners of Norwegian Caribbean Lines (later Norwegian Cruise Line) and met Micky, who was working aboard Skyward as part of the cruise staff. They became fast friends and colleagues.

Today, Zarmati paused to gaze up at the Carnival Conquest atrium and then walked, deck by deck, stopping at each level to take in the view and reflect. He reminisced as he passed the gift shops, the disco, the aft restaurant and, upon arriving at the Degas Lounge, he thought back to 'making multiple welcome addresses for the ship's inaugural.' One of the dapper Zarmati's responsibilities over years had been orchestrating and emceeing ship introductions, hosting thousands of travel advisors, media and VIP guests.

In his mind, he replayed sitting at the aft bar in the Degas Lounge, 'And not a minute would pass without people coming up and saying "Another gorgeous Joe Farcus ship."' 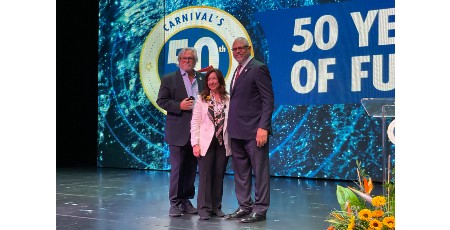 At today's commemoration in the grand ballroom, Carnival President Christine Duffy welcomed everyone and announced Carnival Foundation's $50,000 donations each to Big Brothers Big Sisters of Greater Miami and to World Central Kitchen for Ukrainian relief efforts and in the name of CCL's more than 300 team members from the country.

Making cruising accessible for everybody

Donald told how Ted Arison wanted to make cruising accessible for everybody. And that's just what Carnival does.

He presented Micky Arison with his 50-year pin but noted his service went back further.

Among the other Carnival veterans there were Domenico Rognoni, Vicky Rey, Adolfo Perez, Terry Thornton, Giora Israel and Linda Coll. Some of the other company executives present were Josh Weinstein, Neil Palomba and Lars Ljoen.

Zarmati called it a worthy tribute. 'It was great to walk down memory lane and relive fabulous memories of my time at Carnival,' he said.

More about Carnival history, as told by Micky Arison, along with insights from a dozen company veterans including Zarmati, Rognoni, Rey, Perez, Thornton, Bob Dickinson and others, will feature in the next issue of Seatrade Cruise Review, the official publication of Seatrade Cruise Global.