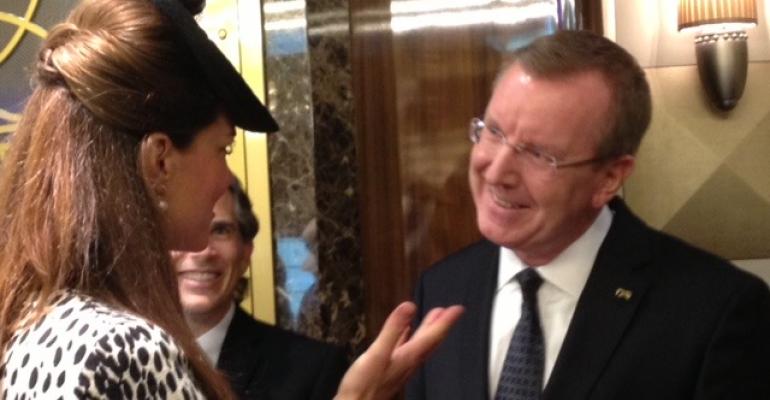 Rai Caluori chats with the duchess of Cambridge, godmother of Royal Princess, at its 2013 naming festivities

Having made a tremendous mark on Princess Cruises over decades, EVP Rai Caluori is bowing out to a standing ovation.

A singer who got his start at sea on the original Love Boat, Pacific Princess, Caluori rose in the entertainment ranks. He was recruited shoreside in 1989 to play a key role in shaping the on-board experience and a parade of exciting newbuilds. His top posts have been EVP guest experience and product development and EVP fleet operations.

'Rai’s invaluable contributions to Princess in over 35 years of service cannot be overstated, from serving at sea on almost every ship before coming ashore and helping to shape the experience for our guests,' said Jan Swartz, group president, Princess Cruises and Carnival Australia.

'His influence will be felt for years to come through his involvement with 27 newbuilds in his time with our company. Perhaps even beyond these accomplishments, however, Rai’s enduring legacy at Princess will be the culture of excellence, gratitude and conviviality that he has championed for our teams.'

Caluori is the rare cruise industry executive who, from an entertainment background, didn't get typecast. He branched out widely to take on many leading roles in other areas.

Caluori modestly puts it down to impeccable timing: 'I grew up in a growing industry and was very lucky along the way. I was fortunate to be hired in 1984 by Brian Langston-Carter, a true polymath, who mentored and supported me for many years.'

Caluori takes his curtain call with a bundle of career highlights: 'The (1998) delivery of Grand Princess, at the time the largest cruise ship to be constructed, was both a challenge and a thrill,' he recounted. 'She was truly a game-changer and I will never forget leaving the Monfalcone shipyard.'

Visiting Diamond and Sapphire Princess in Nagasaki during their construction at Mitsubishi Heavy Industries in 2004 was 'memorable. Both ships were in parallel yard docks and a large group of us visited both ships and we inscribed our names on the bow of Diamond Princess.'

Another high point: The honor of assuming operational responsibility for Cunard in 2004, in addition to Princess.

Overseeing the design and delivery of Queen Victoria in 2007 was a career highlight for the London-born Caluori. He said Carnival Corp. & plc Chairman Micky Arison 'deserves much kudos for resurrecting and protecting the legacy of Cunard — he is a true industry visionary and working with him quite closely on Princess’ next-generation ship has been another career highlight.'

Besides introducing 24 newbuilds, Caluori has been instrumental in three ships to come: Enchanted Princess (due this year), Discovery Princess (2021) and the next generation (starting in 2023).

A kiss from Audrey Hepburn and a chat with Kate

Over the years, Caluori met and mingled with many notables.

On the original Star Princess in 1989, where he was the cruise director, one evening on the bridge wing he spotted the godmother, Audrey Hepburn, on her balcony.

'She was dressed in a Princess bathrobe with her hair swaddled in a towel. She looked up at me on the bridge and blew me a kiss. It was quite surreal.'

Meeting another godmother, the duchess of Cambridge on board Royal Princess in 2013, was 'one of the highlights of my life,' Caluori said. 'She was heavily pregnant at the time and we chatted about our youth program and I encouraged her to book a cruise.'

Despite the present crisis, Caluori is 'so pleased to be leaving Princess Cruises in the hands of an amazing, capable team under the leadership of Jan. The company could not ask for a better leader,' he said.

As Princess continues to look at its structure during the transition to a new chapter in operations, Swartz said the experience and innovation operations function as well as the newbuild work will report to Mario Siebaldi, SVP guest operations.

Read Rai Caluori's love for sea journeys in his own words here.

Master of Explora I Serena Melani on waving the flag for female captains
Feb 09, 2023