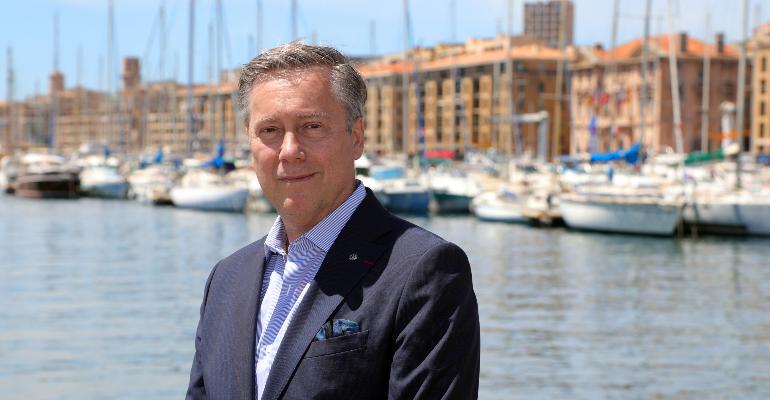 The financial support of its owner and the asset of a modern fleet means MSC Cruises is on course for a fleet of 21 ships in 2023 and a 50% capacity increase between 2019 and 2023, according to Patrick Pourbaix

A few days ahead of MSC World Europa’s delivery in Saint-Nazaire, MSC Cruises General Manager for France Patrick Pourbaix took stock of the company’s French summer results, as well as its initiatives to boost and increase its share on the French cruise market.

Said Pourbaix on restoring the pre-COVID-19 momentum, ‘If last winter has been difficult due to the impossibility of operating normally in the Caribbean and deprived us of our important French West Indies market, this summer has been a nice surprise. Even if people booked late, never did we sell so many cruises from Marseille as this year; one in two passengers boarding there did it on an MSC Cruises ship and many were first time cruisers.’

The strategic choice to restart its entire fleet in spring is among the reasons for this success, combined with redoubling efforts to explain its intentions and offer concrete answers, acting as ‘hyperactive transitionists.’ As a result, the French market for MSC Cruises is ‘nearing 90% of a normal summer passenger occupancy.’

With the financial support of its owner and the asset of a modern fleet, the cruise line kept its ships and building plans intact, meaning a fleet of 23 ships in 2023 and a 50% capacity increase between 2019 and 2023. ‘In 2021 we launched MSC Virtuosa and MSC Seashore, and MSC World Europa is to be handed over very soon, followed by MSC Seascape's inauguration in New York on December 7. Fifth and last ship of our Meraviglia class, MSC Euribia, will be delivered in spring 2023,’ outlined Pourbaix. With such a fleet, ‘we have to regain here a dynamic growth performance at a level of around 25 to 30%.’

As for Explora Journeys, the cruise line’s luxury brand set to launch July 2023, ‘the first two ships will be followed by two LNG-powered ones and two extra units have already been ordered.’  Explora Journeys’ fifth and sixth ships will be powered by LNG and a hydrogen fuel cell, and tackle methane slip.

On the cruise line’s influence in France and around the world, the GM asserted, ‘We’ll charter more flights than ever before for the French market. It is reassuring both for the travel agencies and for our customers.

‘Next summer, three flights will connect Paris to Trieste for Monfalcone, to Athens and to Hamburg for Kiel.

‘This winter, an ITA Airways MSC Cruises charter flight from Paris CDG will allow passengers to get to Hurghada in Egypt. There will also be departures from Marseille, with MSC Bellissima, MSC Grandiosa and MSC Lirica sailing the Mediterranean.

‘As for Le Havre, which the company aims to make the second cruise port in France, the 6,300-passenger MSC Virtuosa will offer nearly double the capacity compared to MSC Preziosa.’

Pourbaix is confident of the French market’s interest in the products the cruise line has to offer, noting that ‘The French market should also be very receptive to our Stay & Cruise product including flights, transfers and hotel nights before boarding. This is managed and packaged by MSC Cruises’ own Italian tour operator.  We already took some reservations this summer.’ Current two-night stays include Venice, Rome, Hamburg, Athens (with excursions) Miami, Cape Canaveral (with tickets to its parks) and New York, which will be MSC Meraviglia’s homeport from April 2023.

In Egypt, the stay of two nights will be in Cairo, for cruises from Hurghada onboard MSC Splendida.

A ‘French touch’… for French passengers

Difficulties with foreign languages: one of the reasons why the French market has not experienced the same growth as the United Kingdom, Germany, Italy or Spain. Hence, MSC Cruises’ idea to offer its passengers an environment where they may feel more at ease. ‘Even if they liked the product, we thought it might be interesting to compensate for what we felt was rather impersonal on a 5,000-passenger ship.’

As opposed to fully adapting the ship for the French market, it meant, ‘adding a few small touches, such as more French-speaking staff, mainly in the entertainment and Kid’s Club sectors, mini-concerts in French or French themed parties.’

A test run was carried out this summer on Marseille-based MSC Splendida and was ‘a resounding success,’ according to Pourbaix, with over 33,000 French passengers during the season.

Bookings are still open for the line’s All Saints’ Day cruise. In agreement with MSC Cruises’ HQ, the initiative is set to be extended from November onboard MSC Grandiosa, which will operate 50 cruises from Marseille until the end of 2023 and provide ‘an even more assertive and refined touch.’