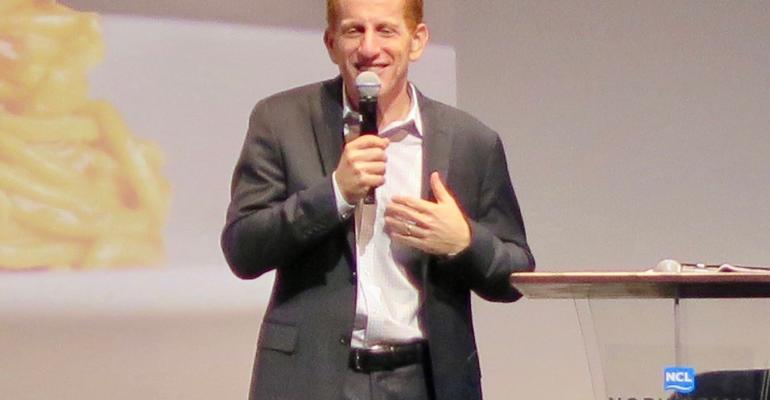 'We are a marketing-driven company,' Harry Sommer said. 'We have to do excellent consumer marketing and we have to deliver an excellent product'
With the new year, Harry Sommer officially took over as president and CEO of Norwegian Cruise Line, armed with a formidable team and a strong product.

‘We do so many things right already,’ he said. ‘We have a great product today. My job is not any massive changes. We’ll just evolve and make it even better.

‘There’s no resort in the world that has 29 dining options, a 270-degree observation lounge, the quality of food and Broadway entertainment that we do.’

However, Sommer — whose well-rounded background includes a CMO role — indicated Norwegian can do more when it comes to consumer messaging.

Succeeding Andy Stuart, who had a strong relationship with the trade, Sommer emphasized his similar orientation. ‘I am 100% committed to the trade,’ Sommer assured agents during a Partners First presentation on Norwegian Encore. ‘You are the lifeblood of the company. We can’t live without you.

‘We’re not looking at commission cuts or co-op (advertising) cuts. We are a marketing-driven company. We have to do excellent consumer marketing and we have to deliver an excellent product.’

He said Athanasiou’s mandate is to train frontline agents so they know the product and work with all the different distribution models to develop the core marketing.

Last August Athanasiou, a veteran of charters, meetings, incentives and events, took the newly created role of chief sales officer, and is working closely with Camille Olivere, SVP strategic sales & trade partnerships. (Sommer and Athanasiou, who was hired by Stuart, go back to their time at Oceania Cruises and Regent Seven Seas Cruises.)

On Norwegian Encore, Athanasiou pledged to make the brand simpler and easy to sell with a return to the core “Free at Sea’ proposition. ‘We got a little complicated,’ she said. Now, ‘Free at Sea’ is simpler but still gives choice, with a value-driven message. ‘It allows the guest to curate what they want in their vacation,’ Athanasiou said.

The sales organization was tweaked, with Sommer approving the doubling of the sales service team in Miami. ‘That is huge,’ she said.

With Sommer having given up the presidency of international, that area has been reorganized to return from corporate oversight to the brands. He explained that when Frank Del Rio took over at Norwegian Cruise Line Holdings in 2015, he saw potential in the underserved international market, Norwegian more so than Oceania and Regent. Sommer opened more than a dozen offices around the world, replacing GSAs.

‘It was a huge success,’ he said. ‘We have great leaders in place.’ The next step was putting responsibility for international sales back under the brands. So, in Australia for example, Steve Odell went from heading the three brands to leading Oceania and Regent, reporting to their respective presidents, while Ben Angell oversees the Norwegian brand there and reports to Todd Hamilton.

Sommer said the company overall now sources about 20% to 25% of its customers outside North America.

‘We’re out to get the guest willing to pay for the experience and enjoy the experience,’ he said. The further a person travels to join the ship, they more they tend to spend.

Isis Ruiz, who worked for Sommer as SVP international marketing & public relations, became CMO at Norwegian in November. She said NCL’s marketing is evolving: ‘Content is king. You will see a lot more video.'

The overall drive is to be 'more immersive. We’ll be focused on story-telling to bring the brand to life.’

Print pieces are still important, though. ‘Those are the daydream aspiration pieces,' Ruiz said. 'People love to look at brochures.'

Company veteran Bob Becker took on passenger services and is ‘changing the culture of our call center people,’ Sommer said. As of late last year, during a 14-day stretch, the average speed of answering a call was five seconds or less.

There’s a commitment to engagement, empowerment (to take decisions, with the elimination of the ‘escalation desk’ to enable issues to be resolved with one call) and exceeding expectations.

Katty Byrd, who Sommer called ‘enormously talented, one of the rising stars of the organization,’ was promoted to VP passenger services.