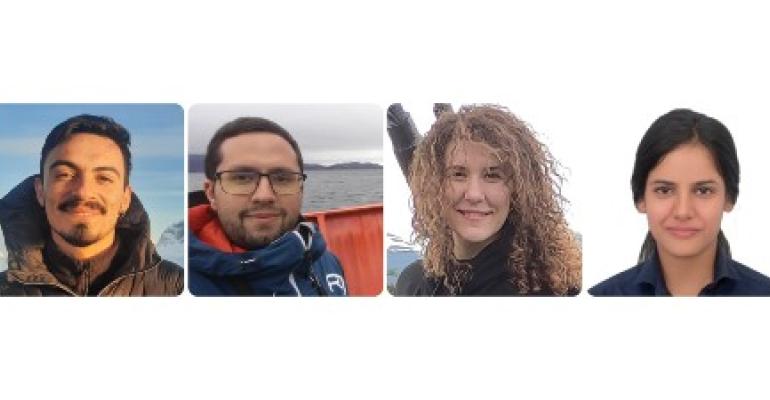 A trio of Antarctic organizations named recipients of Antarctic Fellowships on the anniversary of the signing of the Antarctic Treaty, Dec. 1.

The annual fellowships, awarded by the International Association of Antarctica Tour Operators, the Council of Managers of National Antarctic Programs (COMNAP) and the Scientific Committee on Antarctic Research (SCAR), are an investment in the professional development of talented early career researchers and aim to further the understanding of human presence in Antarctica.

'We were delighted to work with COMNAP to award three Antarctic Fellowships to talented early career researchers this year,' said Amanda Lynnes, IAATO director of environment and science coordination.

'The exciting projects, involving multinational collaborations, will equip the fellows with valuable skills and knowledge while having long-lasting impact within the Antarctic community and beyond.'

The announcement comes on the 63rd anniversary of the signing of the Antarctic Treaty, known as Antarctica Day.

It was in support of the Antarctic Treaty’s mission that IAATO came into being 31 years ago, and in 2019 launched the Antarctic Fellowship with the intention of supporting talented early-career researchers, scientists, engineers, environmental managers, and other professionals. The purpose is to strengthen international capacity and cooperation in fields such as climate, biodiversity, conservation, humanities, and astrophysics research by providing annual funding opportunities.

Pizarro González's focus will be patterns of distribution, abundance and population trends of six Antarctic and sub-Antarctic penguin species affected by climate change, through the implementation of different approaches to ecological niche modelling. His research will help develop conservation strategies for these species and further explore modelling approaches to account for global change processes in wildlife conservation.

Polo Sánchez's project will enhance understanding of volcanic processes in Antarctica's Bransfield Strait by studying two submarine volcanoes (Three Sisters and Orca) and one subaerial volcano (Deception Island) through Noble Gas geochemistry. Ultimately his work will contribute to explain why volcanic activity is more concentrated in some areas of Bransfield Strait than others, with implications for volcano monitoring.

Jain’s project aims to identify plastic pollution in the Antarctic Treaty area and to understand how policies can be implemented to reduce plastic waste. Her project aligns to one of the priority projects for COMNAP, understanding sources of plastic waste and removal options.

Yevchum's is the first SCAR Fellowship to be funded as part of the Polar Initiative. She will visit the British Antarctic Survey, Cambridge, UK, for her project, 'Remotely detecting and mapping biodiversity in Antarctica using VHR satellite and UAV data.' It aims to assess the effectiveness of different techniques for semi-automatic or automatic mapping of the main Antarctic plant communities, as well as penguin and kelp gull nesting sites.

Additional SCAR Fellowships will be announced in the coming weeks.