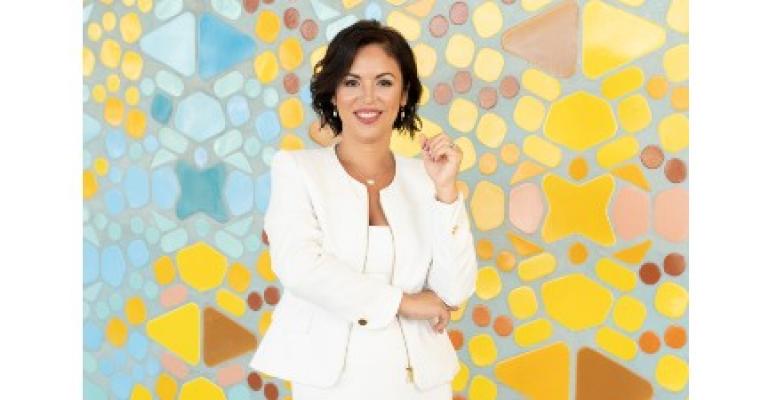 'From a leadership and portfolio point of view, we're well-positioned for the future,' Isis Ruiz said of American Queen Voyages and its parent, Hornblower Group

This is AQV's 10th anniversary, it's just branched into expedition cruising and it recently rebranded, putting American Queen Steamboat Co. and Victory Cruise Lines under one umbrella.

Next up: Chicago's Navy Pier and Memphis postage stamp event

Taking up her role in late April, Ruiz immediately appeared on a marketing panel at Seatrade Cruise Global. This week she'll be in the spotlight for Ocean Navigator's maiden call at Chicago's city-center Navy Pier as Great Lakes cruises begin. Then it's off to Memphis for a news conference with the US Postal Service unveiling its mighty Mississippi stamp collection that features the largest paddlewheel steamboat ever built, American Queen. 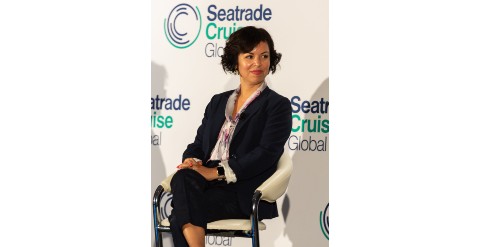 'I'm jumping right in and it feels great,' Ruiz said.

She follows another marketing powerhouse, Kari Tarnowski, who oversaw the 2021 rebranding.

Ruiz's key priority is making sure people know what American Queen Voyages is since 'that umbrella brand is fairly new and we still have some work to do on the trade side and the consumer side.'

With its portfolio of river, lakes and ocean and expedition products, there's 'a lot of ground to cover. People know us for river but might not for expedition.'

Ruiz also wants to ensure 2022 closes out as strongly as it opened. Before she arrived, the company launched sales for future seasons (2023 and 2024) earlier than it ever had before, a decision that's paying off — 'We feel bullish and confident in forward bookings,' she said.

Ocean Victory's inaugural Alaska voyage is just wrapping up. This first Alaska season generated even stronger than expected demand, with 77% of the inventory sold before any passengers, travel partners or media had sailed.

Looking forward, it may be more inventory's needed in Alaska. Since AQV isn't getting a second expedition ship in 2023, as planned, it might be possible for Ocean Victory to add a couple voyages, one earlier and one later in the season.

The company had been on Ruiz's radar during the pandemic.

'I was very keyed into the momentum AQV was building back in Q1 2021 ... leading with conversations around their vaccination requirement and christening a new ship. And I thought that takes courage, that's impressive, what a small but mighty team! I'm rooting for them.'

Being part of the Hornblower Group was another draw for Ruiz. 'They're focused on connecting the dots across all experiences related to travel ... Everything from walking tours to city cruise-tours in Niagara or Alcatraz ...

'AQV is a really critical component of the portfolio. There can be synergies among these businesses, and being part of that conversation is incredibly exciting to me.' Ruiz credited Hornblower Group CEO Kevin Rabbitt for 'the vision to grow despite the pandemic and making some smart acquisitions. From a leadership and portfolio point of view, we're well-positioned for the future.'

River and expedition are new to her

With her background at Norwegian Cruise Line Holdings and Carnival Cruise Line, Ruiz is new to river and expedition cruising though she worked in the premium boutique category with Karisma Hotels & Resorts.

American Queen Voyages offers 'really curated, premium/luxury experiences on a much smaller scale than the environment I came from. There's something unique and special about these expedition experiences and cruises on our inland waters or mighty rivers that are rich with deep encounters ...

'Size matters,' Ruiz said. 'Our size gives us access to places others don't have access to.' And with small ships, 'we can be very thoughtful, designing an experience where our guests come onboard and are blown away and it's even better than they anticipated.

'There is an audience that prefers the smaller ship experience to the larger ships. Your ability to immerse yourself in the communities we visit is deeper ... The encounters you will have are just deeper. It will be very interesting to be able to tell that story.'

AQV has grown to seven vessels in 10 years on founder John Waggoner's 'solid vision,' yet it's 'still early in its growth trajectory' so Ruiz looks forward to having the chance to help shape the next decade and beyond.

The chief commercial officer role is newly created and reports to Chief Operating Officer Shawn Bierdz. Ruiz, who brings marketing expertise, also has sales and contact center oversight for the first time, though she worked closely with those areas in past jobs.

Key team members Ruiz inherited include VP Sales Joe Jiffo. They've known each other a long time and have a shared history at NCL and Carnival, though they didn't overlap at those brands.

'Joe is known and beloved in the business,' Ruiz said. 'He has deep and established relationships on the trade side. He can and has opened doors for us, as only Joe can ... I'm thrilled to be partnering with him. He's built out a world-class sales organization in the year-plus he's been here.'

Jason O'Keefe, senior director of marketing, has been instrumental in the rebranding and is in charge of integrating direct mail and email efforts and digital — which is 'growing by leaps and bounds,' Ruiz said. A new website is to debut in the coming weeks.

Mike Hicks is a highly visible senior director of marketing communications, handling public relations and brand communications, both direct to consumers and through travel partners and media.

Dana Horton, director of call center operations, holds a 'critically important' role, with real-time insight into customers' and travel partners' sentiment. At a time when all travel suppliers have been hard-pressed to be fully staffed, 'Dana has done really great work to ensure we can answer all the phone calls in a timely fashion ... We're really proud of the progress we've made,' Ruiz said.

AQV's rebranding spawned its biggest cruise atlas ever, featuring a deconstructed paddlewheel as a visual component.

Ruiz said 'a lot of great work was done with getting us to AQV and using the paddlewheel as a symbol of our heritage,' but she'd like to see a return to the paddlewheel depicted whole.

And 'We will start tweaking some of the new branded work to make sure those highlights, those American places, those iconic experiences, whether in Alaska or Mississippi, come through very clearly in the marketing ... the actual sights people want to see.'