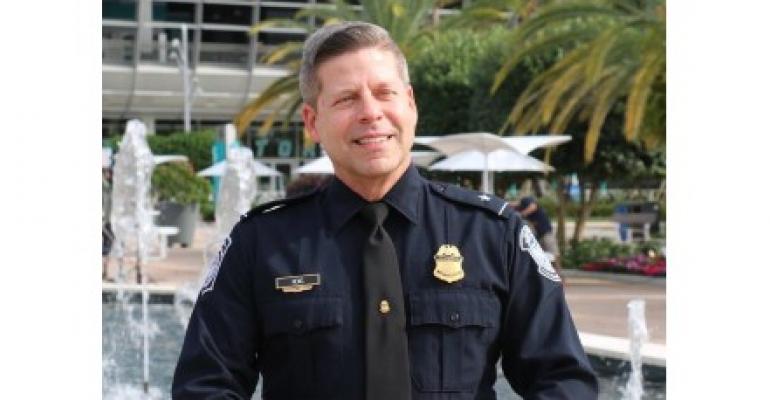 Jorge Roig called a 'true leader' whose commitment, vision and hard work shaped CBP operations 'into the innovative law enforcement agency it is today at PortMiami'

Jorge Roig is retiring from US Customs and Border Protection after three decades at bustling South Florida ports.

Roig called his 33 years in law enforcement 'a hell of a ride.'

Hydi Webb, interim port director, PortMiami, considers Roig a 'true leader.' Acknowledging his 'commitment, vision and hard work in leading CBP operations into the innovative law enforcement agency it is today at PortMiami,' she thanked Roig for his support and collaboration, adding he would be missed.

Besides dealing with the aftermath of 9/11 as the youngest director of a major US airport, Roig was on the scene for a cruise ship bomb threat, the Carnival Ecstasy fire, a mass airport shooting and migrant interdictions.

His facilitation of cruise-related advances like facial biometric screening may sound tame by comparison but they've positively impacted millions of travelers and enabled industry growth. Several years ago CBP took the initiative to extend this screening from airports into the seaport environment.

Facial recognition technology was tested at Cape Liberty in Bayonne, New Jersey, then piloted at Port Everglades and rolled out at PortMiami.

'Sixty percent of all cruise traffic goes through South Florida so we were ideal,' Roig said. For closed-loop cruises, where the ship departs from and returns to the US, it's now used 90% of the time.

Without this advance, it wouldn't have been possible to process a 6,000-passenger ship in the same time as a 2,000-passenger ship, and many more inspectors would be needed, a costly proposition. Wait times are sharply reduced, and inspectors are freed from administration so they have more time for enforcement. 'It's a win-win,' Roig said.

When he became CBP director at Port Everglades in 2009, it was embarking on the renovations of five terminals for Carnival Corp. CBP's facility standards were a cost and space challenge.

According to Wiltshire, Roig was a champion in balancing the needs of CBP and the port and terminal users. One solution was a distributed model. For example, instead of having elaborate canine facilities at every terminal, they're installed at just one.

Things like this translate into significant cost savings from the port's perspective, Wiltshire said.

Another critical juncture was when Everglades became the first port to move forward with Section 559 of the Consolidated Appropriations Act, 2014, which allowed approved entities to reimburse CBP for additional services. This gave cruise lines the ability to pay for more CBP officers at peak times, reducing waits as passenger volumes increased.

Roig also gave his blessing when the port piloted mobile passport control via app and kiosk, along with Global Entry. Though kiosks were short-lived, they were a bridge to facial biometric screening.

How can we solve it?

'He always approached things from a practical standpoint,' Wiltshire said of Roig. 'He was always looking for the opportunity to facilitate the movement of passengers or cargo. There were a number of things he did to expedite the cargo side, too.'

Whenever there was an issue, Roig's approach was how can we solve it? instead of digging in and refusing to budge.

'I always found him very personable, very reasonable,' Wiltshire said. 'He was always available. There was no gatekeeper. You could talk to him. He was also quick to reach out and give us a head's up if there was something he thought we should be aware of.

'He was there when we were growing significantly on the cruise and cargo side. Port Everglades-Fort Lauderdale Hollywood International Airport is one of the few ports that is joint seaport and airport so he had resource challenges but did a lot of work to get additional resources. He was able to balance the needs of CBP and the needs of the port users.' 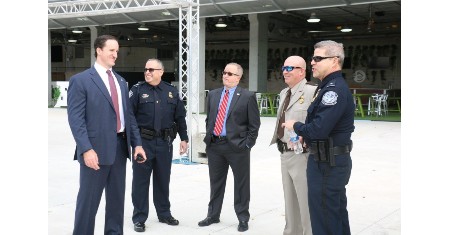 Working with other law enforcement for Super Bowl LIV in 2020

Announcing his impending retirement on LinkedIn, Roig was flooded with thanks and congratulations, including cruise line executives. From her time at Norwegian Cruise Line Holdings, Agnes Mathiesen cited his 'making necessary changes due to changing times possible,' and called him a 'key contributor to the development of PortMiami as the queen of cruise ports.'

After graduating from Miami's Barry University with a degree in business and a minor in criminal justice, Roig planned to study law but an internship at what was then the US Immigration and Naturalization Service (INS) led to a career in law enforcement.

'I never looked back,' he said. Despite the late-night calls and the unpredictability — 'you never knew what to expect' — Roig's found public service rewarding.

He started as an immigration inspector at Miami International Airport then, as an inspector at the INS head office in Miami, he was part of a pioneering field examination unit that went to people's houses. These visits were videotaped in a precursor to the body cams used in law enforcement today.

He became assistant port director at PortMiami in 1996 for 'a wonderful three years. I loved this. Every time I drove over that bridge to PortMiami, my outlook changed, with the ocean, and the people coming off the cruise ships were so happy. Cruising was always a happy environment. It's not the same with people coming off airplanes.'

Then, 9/11 'changed my life.' Five of the 19 hijackers had transited through Miami International Airport. Roig was assigned as acting port director there, at 34, the youngest director of a major US airport. What he thought would be a few weeks stretched into several years.

During this time, the INS was abolished, replaced by the Department of Homeland Security in 2003. Under that, Customs and Border Protection was formed, merging INS, Customs and Agriculture. Roig had to master three sets of laws while acting as a crisis manager and an agent of change.

In 2004, he returned to PortMiami and was reassigned to a new program, the Joint Terrorism Task Force, a high-profile position where he worked with the FBI. Then he was promoted to CBP's director of Port Everglades and Fort Lauderdale-Hollywood International Airport.

Besides innovating at Port Everglades, he did new things at the airport. When a new terminal was built for Southwest Airlines, 'we went unconventional,' with passengers collecting their bags then going to the CBP officer, a streamlined, one-step process instead of two that combined baggage and passport inspection like it's done at seaports.

He was on the scene in 2017 after a man fatally shot five people in baggage claim before being quickly subdued. The airport was locked down. Everyone had to be checked in case there were accomplices, along with 40,000 bags. Roig's proud of how law enforcement responded.

Other emergencies included a bomb threat involving a day cruise ship at Port Everglades — it turned out to be a hoax — and the 1998 Carnival Ecstasy fire just off the Miami sea buoy.

More recently, Roig considers it 'tragic what's happened to the cruise industry with COVID.' That's hit close to home since his wife Carmen Roig is a senior executive at beleaguered Crystal Cruises.

'I hope the industry can get this behind it because it's very dear to my heart, a wonderful environment to work in,' Roig said.

When Jan. 31 comes, he looks forward to not having to put on a uniform and a gun. He's been approached with a number of opportunities but wants to spend time with family and enjoy their boat.  'I have no immediate plans,' he said. 'I suspect I'll be bored in a few months.'

Robert Del Toro will step in as CBP's acting seaport director at Miami until a permanent successor is named.