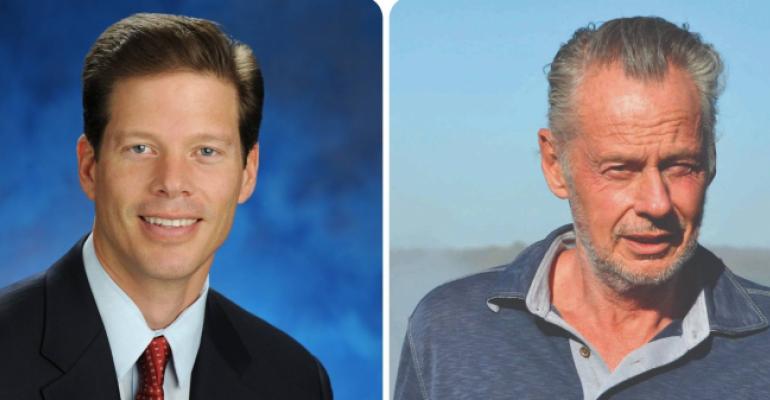 Dolph Berle, left, joins from Topgolf Entertainment Group, while Sven Lindblad, who founded the company in 1979, moves to co-chair of Lindblad Expeditions Holdings

The change is effective May 10.

As well, the company announced plans to resume operations in June, in Alaska and the Galápagos, with a vaccination mandate for travelers 16 and older.

Berle has led Topgolf Entertainment Group as CEO since 2018. Previously, he served as president and COO of Dave & Buster's Entertainment.

Business built on respect for geography, connecting travelers with the world

'It has been a tremendous honor to serve as the CEO of Lindblad Expeditions since founding the company in 1979, and I am proud of all that we have accomplished over the last 40 years,' Lindblad said. 'We've built a business based on the respect and understanding of geography and connecting our more than hundreds of thousands of loyal guests and new audiences worldwide with nature, culture and an opportunity to explore the world.'

Lindblad added that he's 'pleased to hand the baton to Dolf, who I have gotten to know well and for whom I have great respect and admiration. I am confident that his outstanding leadership, integrity and character make him the right choice to serve as our next leader.'

Further, Lindblad said he looks forward to his continuing involvement with the company as co-chair and working with the team to keep driving the business forward.

For his part, Ein said: 'The board and Sven have been working for some time to attract additional leadership talent and identify our next leader, and we believe that Dolf is the ideal candidate to serve as Lindblad Expeditions’ new CEO.'

Ein cited Berle's 'track record of quickly expanding multi-unit businesses and championing technology innovations,' adding that he 'understands the importance of delivering unmatched guest experiences and creating communities where guests want to return time and again — all of which is integral to our robust growth plans to create value for our stakeholders.'

Ein also credited Sven Lindblad for building 'one of the world’s greatest expedition and adventure travel companies by pioneering innovative ways to connect people and places. It is because of his leadership that Lindblad Expeditions is synonymous with life-changing adventures for so many people.'

'I am energized to build on [Sven's] legacy and capture the vast and expanding market opportunities ahead,' Berle said.

Sarah Farrell exits the board

In other news, Sarah Farrell, an independent member of the board, is stepping down, effective immediately. With her departure and Berle’s appointment, the board will have 10 members.

In resuming travel to Alaska, Lindblad intends to head deep into the wide-open spaces, focusing on nature and wildlife, The season will begin with six- and eight-day itineraries aboard the 100-passenger, US-flag sister ships National Geographic Quest and National Geographic Venture, with the first departures June 5 and June 6.

Besides the vaccination mandate, key health safety protocols include two negative COVID-19 tests prior to boarding, daily temperature checks and thorough sanitation protocols. The company said: 'From start to finish, guests will travel exclusively with their expedition community, all equally tested.'

The first Galápagos cruise is planned for June 4, a 10-day voyage on the 96-passenger National Geographic Endeavour ll.

As for crew vaccination, a company spokesperson said that will be required, 'with limited exception for individual crew members who are unable to obtain vaccines due to limitations in their country of residence.'  Crew will be subject to multiple tests and quarantine prior to starting their work, routine continued testing, mask-wearing and restrictions interacting and engaging with anyone outside the Lindblad voyage.