Meet the senior leadership of the new Carnival Celebration 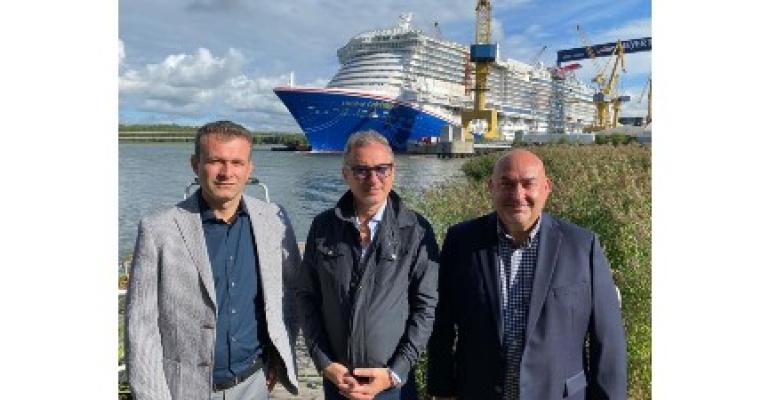 Carnival Celebration is nearing completion at Meyer Turku in Finland, and Alcaras, Gervaise and Camillieri are there getting acquainted with their new ship.

When Carnival Celebration completes its first week in service from Miami, Alcaras will also mark his 26th anniversary with Carnival Cruise Line. Starting in 1996, the Italy native worked on Carnival’s original Celebration as a second officer. There, he was promoted to first officer and then to safety officer two years later. Alcaras first became captain in 2006 on Carnival Miracle.

He’s worked on several ships throughout the fleet and has been part of the inaugural team for newbuilds, overseeing the delivery of Carnival Breeze and Carnival Celebration’s Excel-class sister Mardi Gras.

Alcaras said his new command will be 'all the more special' because Celebration holds a part of his own history with Carnival.

The captain singled out his favorite place onboard as the wheelhouse, his favorite shipboard food as 'my recipe at Cucina del Capitano,' his favorite Playlist Production as 'Celestial Strings' and his most memorable moment with Carnival as his appointment to the master of Carnival Miracle. When not at sea, Alcaras loves to spend time with his family, read books and watch soccer.

For more than 22 years, Gervaise has worked on many ships across the Carnival fleet, including several recent newbuilds. Born in France, he moved with his family to Italy when he was a child and started with Carnival in 2000 as a third engineer on Carnival Paradise.

Gervaise was promoted within his first two years to second engineer and in the early 2000s, he also served as an onboard environmental officer. He became chief engineer in 2013 on Carnival Breeze.

Gervaise's favorite place onboard is the front of the ship's open deck, while his favorite food is from Bonsai Sushi and his Playlist pick is also 'Celestial Strings.' His most memorable moment with Carnival was a Carnival Legend cruise in Alaska's fjords. When not aboard, Gervaise, a licensed amateur radio operator, enjoys talking with friends all over the world and building electronic devices for communications. He also loves fishing.

Now in his 18th year with Carnival, Camilleri joined the company in 2004 as hotel director after managing a variety of hotel and resort properties in his native Malta, as well as in Europe and Asia. He has served as hotel director on several Carnival ships and has been part of the inaugural teams for Carnival Breeze, Carnival Vista, Carnival Horizon and Mardi Gras.

Camilleri's favorite place onboard 'will be The Gateway on Carnival Celebration,' while his favorite shipboard food is Big Chicken and his Playlist show pick is 'We Are One.' His most memorable moment with Carnival is 'the day we sailed with guests on Mardi Gras during summer 2021 after the long pause.' When not at sea, Camilleri likes to spend time with his daughters Jessica, Julia and Ella, based in England, Malta and Hungary.

Debuting from the redesigned Terminal F at PortMiami, Carnival Celebration will join the Port Canaveral-based Mardi Gras as the second Carnival ship powered by LNG. Carnival Celebration is scheduled to be named Nov. 20 before beginning year-round, seven-day Caribbean sailings Nov. 21.