Mike Nerney, who helps put the heart in San Francisco, retires from the port 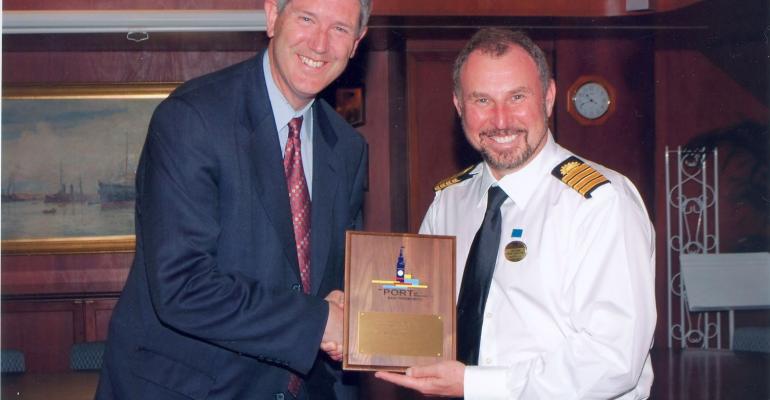 The personable Mike Nerney, who built long-lasting relationships with clients first as a ship's agent and then at the Port of San Francisco, is retiring today as assistant deputy director of the maritime division.

From studying Italian so he could converse with cruise ship captains to venerating every maiden call, Nerney went above and beyond.

'His name and smile are known up and down the waterfront and he is a trusted public servant, loyal to the end, and always willing to find the positives in any situation. His ability to bring people together will be greatly missed by everyone in the waterfront community,' the port's newsletter said in congratulating Nerney on an 'impactful career.'

Stein Kruse, CEO of Holland America Group and Carnival UK, called Nerney one of his oldest friends in the industry. They met in 1982 when Kruse was a purser aboard Norwegian America Line's Sagafjord, which ended a world cruise in San Francisco and started Alaska sailings from there. Nerney, with Williams, Dimond & Co., was the ship's agent.

'Mike and I became immediate friends as we together handled the port clearance procedures in San Francisco that summer, and we have been friends for the ensuing almost 40 years,' Kruse said. 'As Mike transitioned to a senior role in the Port of San Francisco organization I watched how he relentlessly continued to champion our industry. He is a consummate professional, a family man through and through, and one of the most decent and kind human beings I’ve ever known. I will miss him in the industry but will cherish my friendship with him for always.'

Nerney insists people made him feel like a hero when he was just doing his job. When he got a ship's radar repaired, 'The captain was happy, the vendor who did the work was happy ... I was very happy to have a job doing service for other people.'

And, in his marketing role, 'All I had to do is say I'm from San Francisco, and people liked me.'

Nerney started his career with the port in 1999 as a wharfinger, first working in the heart of Fisherman’s Wharf establishing strong relationships with the commercial fishing community. After a year he was promoted to maritime marketing manager where, according to the port newsletter, he 'continued to use his relationship-building talent and business aptitude to grow a robust and vibrant cruise industry in San Francisco, planting the port flag as a global cruise destination.' He became assistant deputy director of the maritime division in 2018.

Before the port, Nerney spent 20 years with Williams, Dimond in the operations department as a ship's agent, at first working with car carriers. As the junior man, he was sent to Pier 35 to help with Pacific Princess on its San Francisco-Alaska runs. Nobody wanted the cruise jobs because they were so demanding, but he fell in love with the business.

A heart for the crew

'I was never a seafarer, but I appreciated the people on the ships. They were away from home for months or a year or more,' he said. He felt the emotions of crew changeovers, with those signing off eager to go home and those signing on experiencing a mix of sadness leaving their families and happiness to be back on board.

One of his agent tasks was delivering the mail bag, and often at 5 a.m. before the ship arrived he'd swing by a local news agent to pick up overseas papers so the crew could see who won the soccer matches. 'It was a chance to connect with them,' Nerney said.

He got to know people in all areas, from the captains, pursers and chief engineers to the garbage sorters. He'd collect the block of aluminum from the sorters, get it weighed at the recycling agency and return with an envelope of cash the next call. 'They loved me,' he laughed. 'I was so happy to do it.'

He can't believe his luck to have landed a career where he 'made so many great friends. The international aspect has been so rich.

'I've been working for 41 years. People I met as early as 1979, I'm still in touch with. I've seen some go from second mate to first mate to chief officer to captain. Some are away from the port for years, but they come back and we have that relationship.'

Nerney studied several languages in his youth but was moved to learn Italian in recent years so he could converse with the Princess Cruises captains. After getting reeds at a music store for Capt. Nicolo Bommarco, who was learning to play the saxophone, Nerney, his wife and daughter were invited for lunch with the captain, first going to his quarters where they requested a song. When Nerney got home, he found a mailer about language lessons. Inspired by Bommarco to take up something new, he registered for Italian.

As he retires, Nerney is full of praise for Maritime Division Director Andre Coleman, and for Brendan O’Meara, maritime marketing manager, who will be taking over as the port's primary cruise contact. 'Andre is doing a fantastic job,' he said, and O'Meara is 'quick, dedicated and excellent. They're great.'

'I have never met anyone so well liked as Mike,' said Luis Ajamil, president and CEO of Bermello Ajamil & Partners, whose company was instrumental in the James R. Herman Cruise Terminal at Pier 27. 'He represented his port and great city of San Francisco so well and was proud of their accomplishments to bring cruising to the Bay area. We will miss him.'