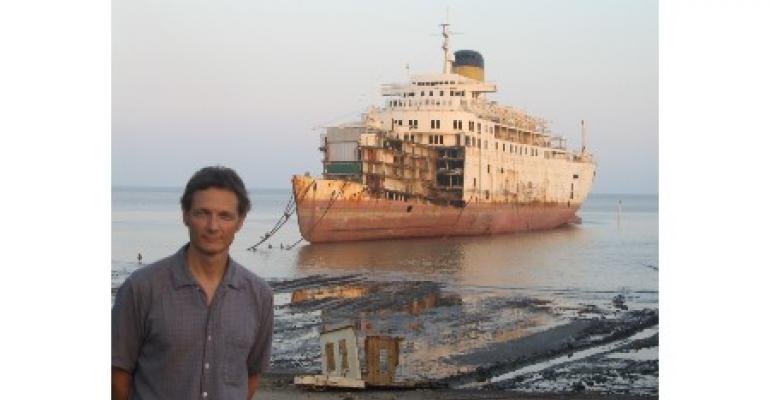 Peter Knego in Alang in 2005 with the remnants of Windsor Castle, the topic of his latest documentary, 'Torn Castle'

The legendary Windsor Castle is the topic of journalist and ocean liner historian Peter Knego's latest installment in his 'On the Road to Alang' series.

Knego travels to the breakers of Alang, India to document noted passenger vessels and save whatever bits of history and art he can. They go to collectors like himself but part of his dream in preserving these treasures is returning them to their roots with the lines that launched these notable ships.

It is hard, dangerous and often unappreciated work but Knego's driven by his love for vessels of a bygone era and how they reflect period history.

'Ocean liners were a symbol of national pride, represented the latest technology and had purpose — taking people to new lives, some even carrying cargo,' he said.

As a boy, Knego collected Union-Castle Line memorabilia and the RMS Windsor Castle — delivered by Cammel Laird in 1960 — particularly struck a chord with its more modern, sleeker lines. It was launched by the Queen Mother Elizabeth in a ceremony attended by thousands and seen by millions on television.

It had stylish lounges by noted designer Jean Monro, sweeping open decks and was the largest liner ever to operate regular service between the UK and South Africa. Windsor Castle had a proud but short, 17-year liner career, before going to Greek shipping tycoon Yiannis Latsis. Apart from serving as an accommodation vessel in Jeddah, Saudi Arabia, the renamed Margarita L languished in Piraeus before being sold on to the breakers as Rita.

Knego was able to go aboard in Piraeus to film.

'She was maintained beautifully and hadn't changed, unlike the Transvaal, which was rebuilt to become Carnival Cruise Line's Festivale,' he said. ‘Her interiors stayed the same, and the artwork, log books on the bridge, the silverware and crockery were unchanged even in 1998 when I went aboard the first time.

'She was a floating museum.'

When the vessel went to its Alang graveyard, 'I was devastated because she was a time capsule. Ocean liners as an art form are being lost,' Knego mourned.

By the time he arrived to Alang in August 2005, the Rita was half-demolished, which was 'heart-breaking.'

Knego's exclusive video from Piraeus, together with licensed historical footage from Union-Castle showing the Queen Mother launching the ship and life on board, enriches his DVD 'Torn Castle,' as do interviews with a longtime purser; with maritime historian Ted Scull, a tourist class passenger in 1968; and the late author Peter Newall ('Union-Castle Line: A Fleet History'). His Alang footage is gripping and emotional. 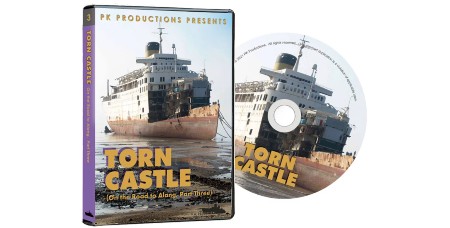 'Torn Castle' is the third in a series, following 'The Sands of Alang,' featuring Costa's former flagship Eugenio C, and 'On the Road to Alang,' which captured vessels like Sun Line's Stella Solaris and Stella Oceanis, and the Big Red Boat III (Festivale/Transvaal Castle).

'I hope people will appreciate not only Union-Castle but the era,' Knego said.

Ocean liners were not made cookie-cutter fashion so each was distinctive, and it was a time when people socialized, conversed over fine dining, teatime and cocktails and simply enjoyed the sea — while sometimes taking part in quirky deck games like frog racing (with wooden frogs).

The last of her kind

'When people sailed on Windsor Castle, they remembered it for the rest of their lives,' Knego said. 'She was the last of her kind. It was important to document that.'

Globetrotter Knego spent the pandemic at home in California creating this latest DVD and building his MidShipCentury YouTube channel with videos of ships old and new, ranging from a multi-part series on the Achille Lauro to this year's new World Navigator for Atlas Ocean Voyages.

His documentaries, along with treasures saved from Alang, are available to purchase as DVDs or for streaming or download at www.midshipcentury.com. Next up: Blue Lady, built as the ocean liner France and converted into the Norway by Norwegian Cruise Line.

Some of Knego's latest acquisitions from Alang include the stained glass ceiling from the library of Carnival's Celebration by architect Joe Farcus, which depicts the ocean liners Normandie and Queen Mary, and the Helen Webber ceramics of American cities and regions from Carnival's former Holiday, scrapped as Magellan.

Knego isn't just in his own documentaries. He appears in the 2021 Edgar Wright movie 'The Sparks Brothers' about Ron and Russel Mael of the influential music group Sparks. The documentary premiered at the 2021 Sundance Film Festival and is currently having a run on Netflix.

Knego spent 20 years as a promoter for Sparks, who are having a moment — they also wrote the screenplay and music for 'Annette,' a film by Leos Carax starring Adam Driver and Marion Cotillard that premiered as the opener of the 2021 Cannes Film Festival.