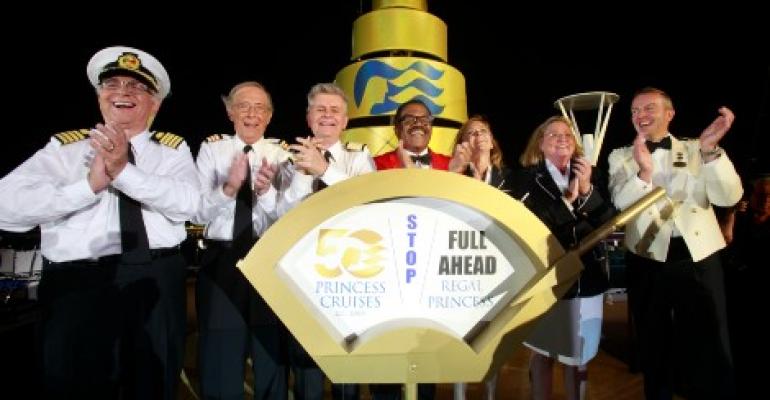 Actor Gavin MacLeod, who played a huge role in popularizing cruising as Capt. Merrill Stubing on 'The Love Boat,' died Saturday at his home in California. He was 90.

'It is with sadness felt to the depth of the oceans that we mourn the passing of actor Gavin MacLeod, our beloved global ambassador, dearest friend and treasured member of the Princess Cruises family for more than 35 years,' the line said in a statement.

From his 10 seasons starring on the hit TV show 'The Love Boat' (1977 to 1986) and for more than three decades following the show’s final season, MacLeod 'enthusiastically shared his passion about the joys and adventures of exploring the world while cruising,' Princess continued. 'He always reminded us that — like the popular TV series — “cruising gives people something to dream about.”'

MacLeod officially became Princess Cruises’ global ambassador in 1986, appearing in a vast array of advertising campaigns and countless public and media appearances. His role for Princess continued until his death.

MacLeod's work on behalf of the line ranged from travel agent trade shows to autograph signings on Princess ships, where he shared stories and embraced fans from around the world. He conducted thousands of media interviews (including with Seatrade) and helped to launch nearly every new Princess ship that joined the fleet.

MacLeod and 'The Love Boat' cast officially named two ships: Dawn Princess (1997) and Regal Princess (2014), which served as a precursor for the 50th Golden Anniversary Celebration Year for Princess Cruises (2015).

In May 2018, the Hollywood Walk of Fame dedicated an honorary star plaque recognizing MacLeod and the other 'Love Boat' cast members and Princess Cruises for their contributions to the history of television and support of the preservation of the Walk of Fame.

On Jan. 1, 2015, MacLeod, in character as Capt. Stubing, was at the helm one last time when he and his fellow cast members cruised down Colorado Boulevard on the bow of a floral Princess ship float in the Pasadena Tournament of Roses Parade.

For 10 years in a row he was a special guest aboard a Valentine’s Day cruise where he and his wife presided over the renewal of vows of hundreds of couples. In 2020, MacLeod, joined by his 'Love Boat' TV daughter Jill Whelan, served as officiant and matron of honor, respectively, in support of Princess setting a Guinness World Record for the 'largest multi-location vow renewal,' during simultaneous ceremonies across three ships for 1,443 couples.

He released his autobiography, 'This is Your Captain Speaking: My Fantastic Voyage Through Hollywood, Faith & Life' in 2013. Part of his book promotional tour included appearances on Princess ships.

MacLeod also performed his act, 'Love Letters,' on several cruises and participated as a celebrity judge for 'The Voice of the Ocean' passenger singing competition.

He rang the New York Stock Exchange opening bell on Oct. 23, 2000, when P&O Princess was listed.

Loved to cruise — and the fettuccine alfredo

MacLeod’s favorite way to vacation was cruising with family and friends. Tahiti was the destination he liked best, and he loved the Italian dishes on board, especially Princess's signature fettuccine alfredo.

'All of us at Princess Cruises and our loyal guests around the world whom, to this day, remain avid fans of Gavin’s, send our heartfelt condolences to his wife Patricia (Patti) and his entire family who have lost a loving husband, father and grandfather,' the line said. 'We offer our sincerest gratitude to them for sharing Gavin with all of us for so many years.'