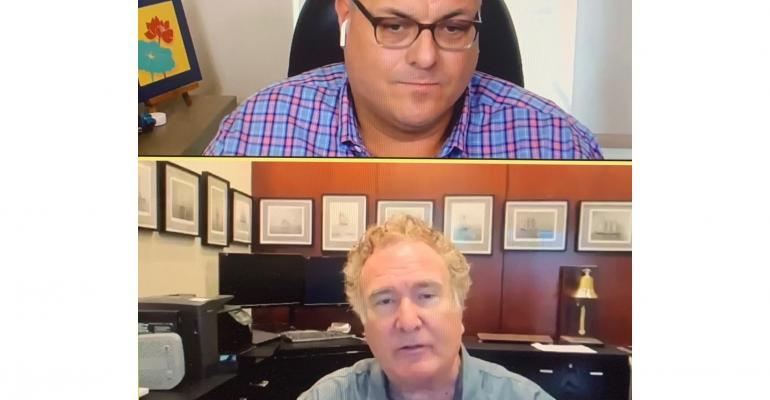 'Isolated incidences which are handled well are proof that the system works — not that there's a problem,' Richard Fain, bottom, said during a Signature webinar hosted by Alex Sharpe, top.

Richard Fain said COVID-19 on the first Caribbean cruise since the pandemic shutdown seems to be handled well and that the industry can learn from this.

'We can't eliminate COVID in society ... The objective is to prevent outbreaks ... to make the risk of COVID less than it is in your hometown,' the Royal Caribbean Group chairman and CEO said Thursday as the SeaDream Yacht Club story was getting heavy media play.

Speaking during a Signature Travel Network webinar, Fain noted travelers aren't just concerned about getting the virus but about getting trapped on a cruise ship should anyone become infected.

Learning from months of operations

SeaDream has strict protocols and had been sailing in Europe since June, Fain said, adding that from what he's seen of the situation, it's been handled well. (At the time of his remarks, just one case had been confirmed; that subsequently went to five).

Also, several other lines' experiences from months of cruises in Europe shows that it is possible to contain coronavirus on a ship.

'So I would look at the few instances we've had of cases as success stories,' Fain said. 'We are able to deal with these things, isolated cases, in an isolated way. That's the objective.'

He considers the SeaDream matter an opportunity to learn 'and make us so much better as an industry.'

'The coincidence of it being the first Caribbean cruise and the coincidence of having press on board notwithstanding, isolated incidences which are handled well are proof that the system works — not that there's a problem,' Fain said.

Turning to another timely matter, Signature Travel Network's Alex Sharpe asked if Joe Biden's election will have any impact on cruising?

'None whatsover,' Fain said without missing a beat.

Science, he continued, is going to decide the next steps, and the Healthy Sail Panel took a scientific and pragmatic approach in making its recommendations.

'I'm confident the decisions are going to be driven by science. I think the science is on our side. The environment of a cruise gives us opportunities to do things you can't do on land.'

Fain went on to note all the learnings from scientists and from the cruises in Europe and the Caribbean and elsewhere will result in protocols that 'reduce the chance of you getting COVID on your ship to dramatically less than it would be in your home community' while also ensuring that if there's a case or cases, they won't balloon into an outbreak.

Some have remarked on the complexity of the US Centers for Disease Control and Prevention's framework for conditional sailing order. Sharpe asked if there were any surprises?

'Of course there were,' Fain said. '... Yes, we have work to do. Yes, there are some things we want to work with the CDC to understand better or, in some cases, to change because there are different facts.'

But there's a common goal: 'To get us safely back in the water.'

According to Fain, CDC requirements have 'always been very strict. In the long run, that benefits us. Our industry is not going to do well if people are worried about illness on ships.'

Meanwhile, the speed of advances — vaccines, technologies and therapeutics — is 'mind-boggling.' So CDC will want to make changes as information and technology change.

This week's news of the Pfizer vaccine's effectiveness is 'potentially transformational,' along with hearing from Dr. Anthony Fauci that the vaccine may become available to anyone who wants it by the end of April.

Sharpe suggested cruise lines are characteristically shooting higher and aiming to deliver better than other sectors.

'We've always been safer,' Fain agreed, adding he gets a kick out of other businesses talking about they're now cleaning surfaces in a manner that 'Ten years ago we would have thought was inadequate on our ships.'