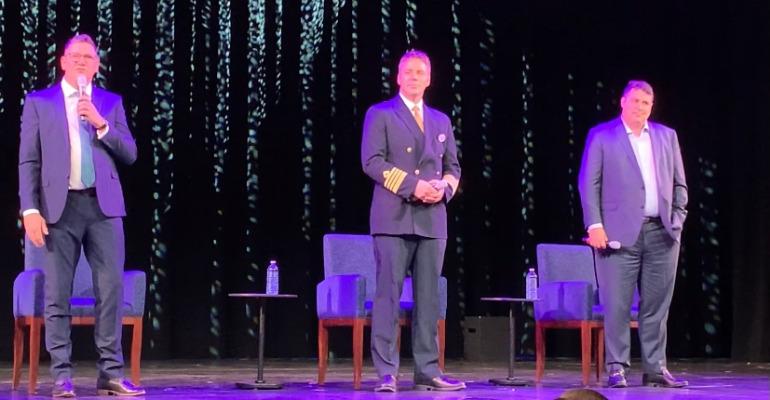 Sean Treacy has a ‘big job to do’ when it comes to fulfilling his new role as SVP hotel operations at Royal Caribbean International, while VP EMEA at Royal Caribbean Cruises, Ben Bouldin, refuses to rule out sailings in China where the brand’s largest ship, Wonder of the Seas, was originally intended to sail.

‘[Royal Caribbean] is a well-oiled machine that delivers the best vacation products in the world. I'm not going to screw that up,’ Treacy told Seatrade Cruise onboard the fifth Oasis-class ship as it completed a two-day sailing for trade partners before its maiden European cruise departing Barcelona May 8.

‘We've got a big job to do with Icon of the Seas,’ he added, in reference to Royal Caribbean’s LNG-powered vessel entering the market in 2023, ‘It's going to be the first time we’ve launched a new class of ship in over a decade. That's a big job for us to do and we're very excited.’

‘I would never say never,’ said Bouldin when it comes to Wonder of the Seas sailing in China. Pre-pandemic, the ship had been announced for Shanghai.

‘We know the UK is a particularly strong market: Anthem [of the Seas] is pretty much sold for the summer…,’ he added, in relation to sailings from the Port of Southampton this year. ‘I think the focus in the next five to six months is going be on our fly-cruise offer. But we're always evaluating what the right deployment is for the UK market. Michael Bailey recently announced that Icon of the Seas is going to stop in Southampton… so lots of exciting things coming down the line. We'll see what happens.’

Bouldin expects a large portion of Royal Caribbean’s growth to be realized in Europe, the Middle East and Africa, and as a result said, ‘it's going to be really important that we build competence in fly-cruise.’

He went on to add that the balance of Americans flying to Europe versus customers being sourced locally is 'uncertain.' He explained, 'My team's goal is very much on sourcing as much locally as we possibly can. We've got to figure out how we can fly more effectively for markets like Germany, Italy, France, as well as continuing to ensure we can meet demand in the UK, Ireland and some of our bigger markets...

'I think by the end of May, we will have all of the ships in our fleet back in service. And we are laser focused on making sure that we're able to welcome all of our guests back successfully.’

‘We've just recently announced an exciting expansion plan in Latin America with Rhapsody of the Seas. Rhapsody is going to be sailing in winter 2023-24 out of Panama and Cartagena and that's very much focused on the Latin American market… That's a big new investment in Latin America, and hopefully we can expand from there.’

Addressing trade partners, who previewed the world’s largest cruise ship from May 6-8 prior to its Barcelona and Civitavecchia (Rome) cruises, Treacy said, ‘Our support for the trade is never dying. We recognise the majority of our business comes from trade, the advocacy we get from trade is tremendous, it's a big part of our comeback story.'

He went on, ‘We have seen business come back a little faster than through trade because so many of you are restarting your businesses, but it's very exciting to see volume from trade come back. It's an essential part of our distribution strategy.’

In the past six to nine months, Royal Caribbean has started to spend more ‘aggressively,’ Bouldin said, including on television advertising and marketing across Europe. ‘We have boosted commission. From a base commission earnings perspective, we've also boosted targeted earning potential.’ In the UK, Ireland and Northern Ireland, the company is spending an extra 5-8% on average on commission versus 2019.