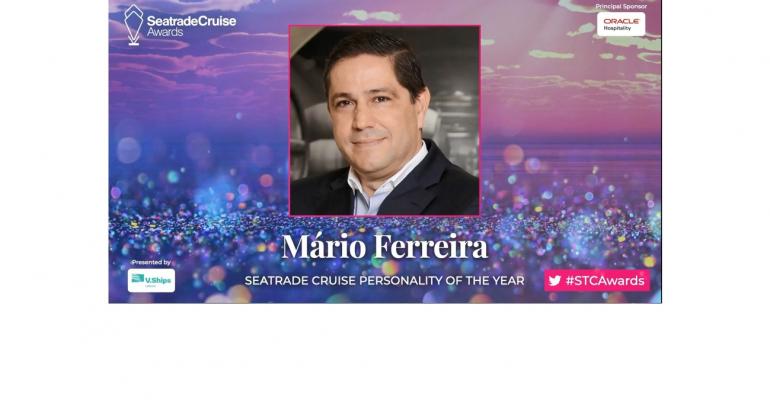 The roll of honour was announced at a virtual ceremony Tuesday during the first Seatrade Cruise Virtual.

According to Bond, the programme, once again, received a record number of entries, 'recognizing the best in international cruise industry success, ambition and innovation.’ She added, ‘We congratulate our outstanding awards recipients, and express gratitude to our independent panel of judges for their devoted effort in selecting our winners.’

Speaking about Seatrade Personality of the Year Mário Ferreira, Bjørnsen told the audience: ‘This year’s personality has led a dedicated team that has evolved from a regional river cruise operator to a global player with both his own brand or by partnering with other operators. The company is ready for a massive expansion in brand-new ships using the latest technologies and has been one of the first to restart cruising with robust testing and operating protocols demonstrating resilience in a challenging environment.’

Talking about Vass, SVP for both land programs and product development at Abercrombie & Kent Group of Destination Companies and winner of the Lifetime Achievement Award for Services to Cruising, Bond said: ‘This larger than life personality is standing down from his current position at the end of 2020. He has tirelessly served as a champion of cruise for almost four decades having spent 10 years on ships in various roles, followed by a decade in senior executive positions for Sea Goddess, Seabourn, Cunard, Holland America, SeaDream Yacht Club and The World. For the last 17 years he has overseen and expanded globally the cruise land program and products for A&K Group.’

Winner of the Achievement Award 2020 was presented to CEO Paul Slade and his team at Unimed which has serviced the maritime industry for over 40 years with all aspects of health and safety. Bond said: ‘During this year those efforts have resulted in the organisation’s  support directly to many vessels and seafarers globally affected by Covid-19 including Norwegian, Princess Cruises, Holland America, Seabourn and Disney Cruise Line fleets, among others, and going above and beyond in many cases.’

Destination of the Year

Supplier of the Year

Innovative Shorex of the Year

Port of the Year

Expedition Cruise Initiative of the Year

Talent Development of the Year

Seatrade Cruise Personality of the Year 2020, sponsored by V.Ships Leisure