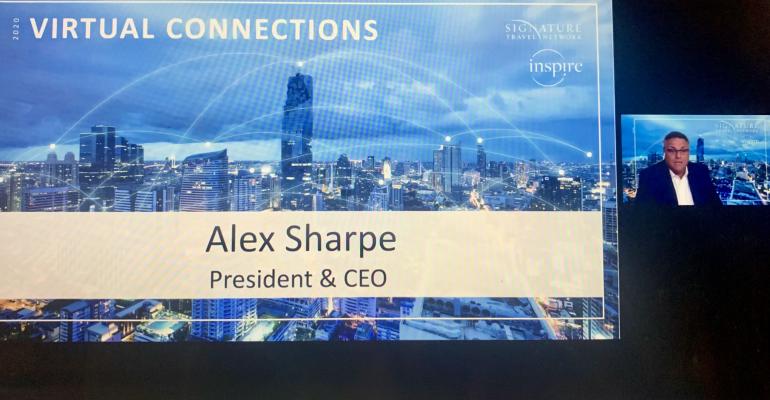 Early commission payment is an 'absolutely critical part of the pipeline' for keeping the travel distribution system afloat and 'a soapbox I've been on,' said Alex Sharpe, president and CEO, Signature Travel Network.

Sharpe praised those cruise line partners that are paying commission now, on sailings that were canceled, and on rebookings with future cruise credits.

The network is pushing early payment, Sharpe said, adding that Signature has to be thoughtful because it's tough to press lines for pay now when they don't know when they'll be able to sail.

Sharpe spoke in the opening Signature Virtual Connections event Tuesday, first in a series of webinars for Signature members and partners that will take place in the coming weeks.

Globus checklist for restarting travel has one key roadblock

Nisbet presented a checklist of six items needed to restart travel — proper health and safety protocols in place (check); excursions, hotels, restaurants and other venues open (yes, to some extent), airlift (check, to some extent), no 'do not travel' advisory from the US Department of State (yes, though the Trump administration recently suggested it may block people returning from places with coronavirus, however Nisbet didn't go into that) and guests ready to travel (yes).

'The big problem, the deal-breaker right now,' Nisbet said, is that borders are closed to Americans, or a 14-day quarantine on arrival is required. 'We need a vaccine or for countries to replace border closures with individual tests,' he said.

Are clients ready to travel internationally?

According to a spot poll during the Virtual Connections event, the majority of Signature owners (42%) put the number of their customers wanting to travel internationally at 20% to 40%, while a close 40% said fewer than 20% would do so. Fourteen percent said 40% to 60% of customers would travel internationally, while just 4% said more than 60% would.

With European river cruising looking iffy for Americans in 2020, according to some lines, Nisbet said Globus is closely watching Europe's famed Christmas markets, key for Avalon in November and December. He's confident markets will operate but will Americans get to go?

According to Nisbet, the 'good story' for river cruising is that it can operate in a 'bubble.' He cited Avalon's small vessels carrying fewer travelers, the fact that people stay with the same group and adhere to health checks throughout the trip and that they remain in one room (their cabin, with no recirculated air), dine in controlled venues with health protocols, skip the lines at sights and are always a few feet from shore should an emergency develop.

Many European countries, he noted, categorize river cruising as a hotel, rather than a cruise, making resumption easier.

In another spot Signature poll during the Signature Virtual Connections event, 41% of respondents said river cruising is outperforming other types of travel, while 27% see it selling at the same level as other types.

During a virtual news conference related to the event, Sharpe told Seatrade Cruise News the biggest concern for clients is repatriation — not being able to return from a cruise and potentially being locked out of the US if something happens.

'That's why you'll see cruising come back with shorter itineraries. If we can get Alaska back, I think Alaska will be a very, very popular destination because it's US and you can get home,' Sharpe elaborated. 'You'll see a lot of private-island cruises, where people can get home easily. We're hoping to see that, ideally in the fall, but certainly in the first of the year and hopefully by the time the Europe and Alaska seasons come along, we have more understanding [about operating with the virus].'

Another client concern Sharpe identified is crew protocols. If travelers have to get tested, what about the crew? And because they live in confined spaces, the opportunity for the virus to spread among them is greater.

Sharpe has been participating in small retailer focus groups the public cruise companies are running with their science panels, 'Our role, those of us in the travel agency side, is to [let them know] if this still feels like cruising,' he said.

Lines can maximize protections against the virus, but it's a balancing act: 'What makes people feel comfortable, what passes muster with the [Centers for Disease Control and Prevention] and what still feels like cruising ... If it's not fun anymore, why would anyone jump on a cruise?'

As to whether there's lasting reputational damage to cruising because of the early outbreaks, Sharpe thinks that's an issue for some people.

For those who haven't cruised, the 'cruise ship as petri dish' image is going to take a long time to overcome. On the other hand, those who cruise know that ships were already very clean and that standards are going up from there.

'Cruise ships, because they can control that environment, will be safer, much, much safer than they ever were before, probably safer than some public areas back home such as restaurants,' Sharpe said.

Avid cruisers want to return, including some Signature clients in their 80s who are 'upset as hell because they can't get on a world cruise in January and go away for five months.'

Sharpe expressed confidence cruising will rebound. But key to restoring reputation is travel advisors' advocacy: 'Their value has never been greater.'

He recounted prior travel crises. 'When people were scared to go to Mexico, advisors saved Mexico. When people wouldn't go to Africa because of Ebola, it was advisors that educated them on the geography and made them understand and feel comfortable and brought travel back. Advisors led the way.'

After Costa Concordia's capsize and Carnival Triumph's power loss in the Gulf of Mexico, 'It's been advisors that have been able to say "I've cruised a hundred times; let me tell you my experience. I send dozens of people a week on ships and let me give you that feedback."

'They're going to need the advocacy from the travel advisor community, and that's why you're seeing the cruise lines go to such extensive efforts to support us.'