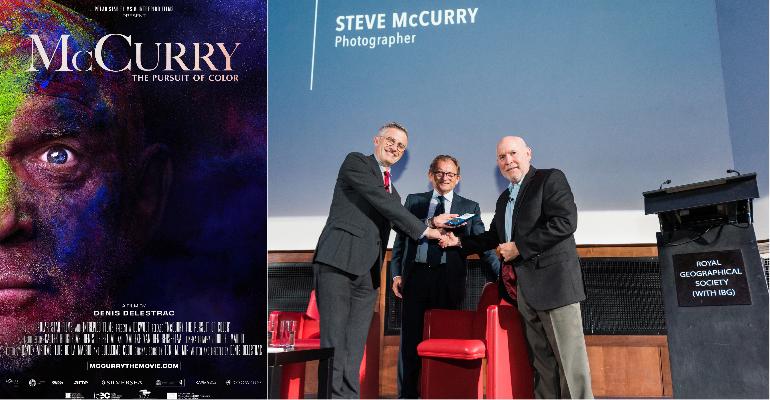 Silversea Cruises hosted the UK premier of a biopic on the world-renowned photographer and Silversea collaborator Steve McCurry at the Royal Geographical Society (with IBG) in London on Wednesday, attended by McCurry directly and the cruise line’s executive team.

McCurry’s body of work spans conflicts, vanishing cultures, ancient traditions as well as contemporary culture. ‘Afghan Girl,’ captured in 1984 of Afghan refugee Sharbat Gula, is among his most eminent photographic portraits, appearing on the cover of National Geographic magazine the following year.

Also in attendance at ‘McCurry: the Pursuit of Color’ on October 19 was the film’s award-winning director Denis Delestrac, plus travel advisors and select guests.

McCurry has travelled to over 35 countries as part of his exclusive collaboration with Silversea and many of the destinations feature in the film, including India, Mongolia, Madagascar, Bhutan, the Arctic, the Virunga Mountains, Uganda and more.

Said Roberto Martinoli, president and CEO, Silversea Cruises, ‘Hosting the premiere for Steve’s incredible film is always an honour that builds on our joint commitment to safeguarding destinations and their people for generations to come.

‘It was especially gratifying to host this special event at the Royal Geographical Society in London, which has been a valued partner of Silversea for a decade.’

The event provided an opportunity for those attending to meet McCurry in person and to learn more about the line’s partnership with the photographer, which yields exclusive content for its passengers.

‘It has been rewarding to work in collaboration with Silversea, a leading travel company that has demonstrated not only a passion for excellence, but also has a deep commitment to the communities which they encounter on their voyages,’ stated McCurry.

‘Silversea has supported projects around the world, including charities that protect and preserve wildlife in the Galapagos and those helping farmers dealing with severe drought in Australia.

‘It is gratifying to work with a company and its leadership that is dedicated to caring for the world and the people in it.’

He went on to praise ‘consummate storyteller’ Delestrac, noting that he ‘makes such engaging films about subjects that pertain to the issues of today. It was fascinating to travel with him and to watch him practice his craft as we joined forces on the road for two years.’

Priot to the screening, prof. Joe Smith, the Royal Geographical Society’s director, presented McCurry with the prestigious Cherry Kearton Medal and Award, after being named as its recipient in 2020. ‘Since 1830, the Royal Geographical Society has committed to sharing knowledge about the world in which we live,’ Smith observed. ‘We are proud to recognise that 2023 marks 10 years’ collaboration with Silversea, who – in collaboration with Steve McCurry – shares our mission and inspires travellers to cherish our planet and its communities.’

He continued, ‘Steve McCurry is a worthy recipient of our prestigious Cherry Kearton Medal and Award, which recognises excellence in geographical storytelling, for his photographic work that contributes to our understanding of people and places…’

McCurry: the Pursuit of Color

The biopic serves as an intimate portrait of McCurry that charts his career, reveals the untold stories behind his iconography and reflects on pivotal moments in his adventurous life.