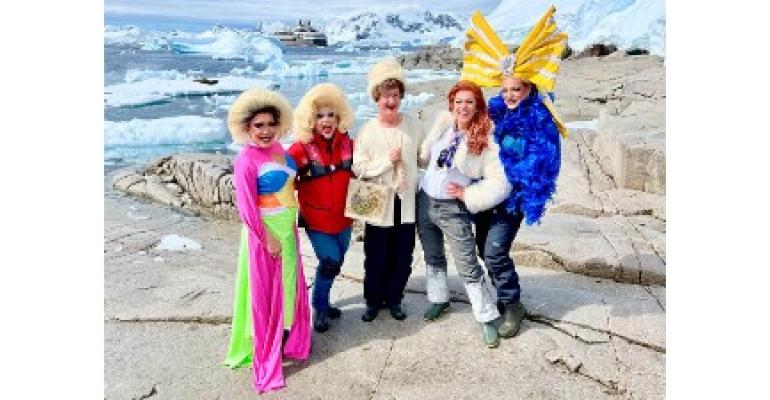 'It’s taken over 200 years of Antarctic exploration to get here, but with VACAYA, the LGBT+ community has now officially left their mark on the seventh continent,' VACAYA Co-founder Randle Roper said, adding: 'The incredible work of the VACAYA team, our expedition leaders, and our fearless captain made this journey possible.'

Out and proud Le Boréal Capt. Florian Richard thanked VACAYA for 'such an open-minded and fun sailing,' adding: 'I’m proud to be a part of this history-making expedition.'

The Vacayan explorers’ reactions to making history ranged from joy to humble introspection.

'Words don’t do Antarctica justice,' Jacob Carson of Orlando, Florida said. 'To be part of this historic expedition with VACAYA and my queer family is beyond my wildest dreams.'

Aaron Centric and Stephen Harms of Rocklin, California said they 'never imagined coming to Antarctica until VACAYA made it possible to be here with our LGBT+ family, experiencing the immeasurable beauty of this distant land. We hope this expedition inspires others to travel to places they otherwise wouldn’t.'

Christopher Chandler-Liu of Washington, DC reflected that at 28, 'it’s really fantastic to be able to check off this most bucket-y of bucket list destinations, recognizing I’ve had incredible fortune to explore a place on earth so few people ever get to experience.

'I would have never been able to do this without VACAYA,' he continued. 'I am now part of LGBT+ travel history and am humbled by the magnitude of this moment. Antarctica changes you in incalculable ways and my world will never be the same.'

'Traveling to Antarctica has been a life-long dream,' said VACAYA Cruise Director Paul J. Williams of Dallas. 'Merely the opportunity to do this was overwhelming, and to do it with VACAYA and my LGBT+ siblings? Simply indescribable. Upon my first sighting of the seventh continent, I wept with awe as this dream became a reality.'

'Although we had great fun on the journey, the significance of this voyage is just starting to sink in with the men, women and non-binary explorers who joined VACAYA on this first-of-its-kind expedition,' Roper said. 'Their adventure with us will be a tale of discovery, friendship and LGBT+ history they’ll be able to share for all time.'

Capt. Richard added: 'Although I’ve never struggled with who I am at Ponant or any of the other companies I’ve worked for, I never really brought my orientation forward. I always played the professional – fair, human, a strong manager – and ultimately that led to being promoted to captain nearly five years ago.

'Focusing on the technical aspects of the ships, I was recognized mostly for my skills and talents as opposed to my orientation. Of course, I was always inspired by public gay figures who were also celebrated for their work: Oscar Wild, Tim Cook, Tom Ford and an endless number of sportsmen/women, authors, politicians, entrepreneurs, lawyers and doctors. Now, I’m inspired by the Vacayans and their willingness to go where no one before them has gone.

Professionalism and a thoughtful management style

'Being gay in the navy or on merchant marine ships is certainly difficult,' the captain contineud, 'but I do believe that every gay marine officer could have a bright and satisfying career at sea if they approach their role with professionalism and a thoughtful management style.' 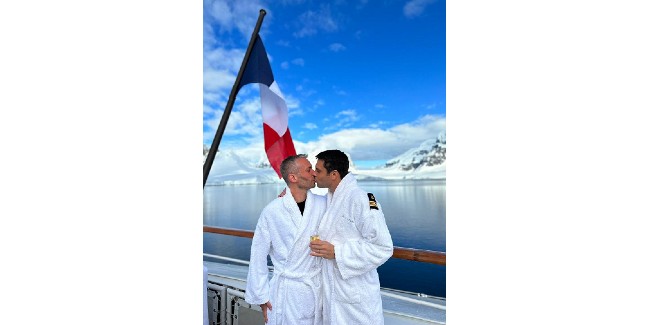 For this VACAYA expedition to Antarctica, Richard had the chance to have his husband along.

'It was incredible to be able to kiss him in front of all guests and crew, knowing I wouldn’t be judged – even though I’m in a “front page” role,' Richard said. 'I can’t thank VACAYA enough for having me at the helm for this history-making expedition.'