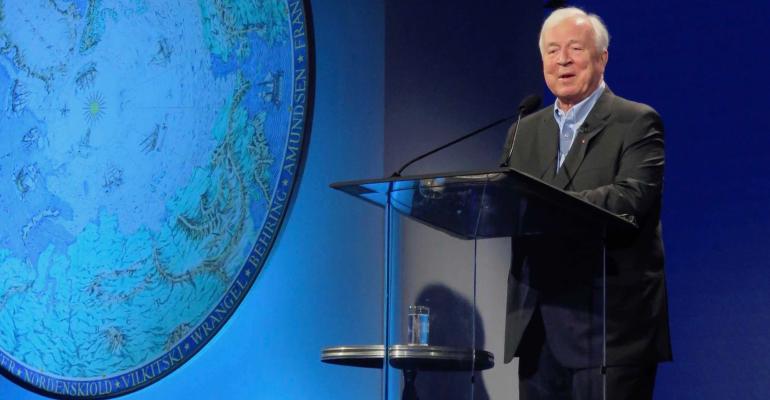 The newly announced expedition ships Viking Octantis and Viking Polaris will run on MGO, but Viking’s long-term vision is focused on hydrogen as the best solution for the environment.

‘Many people believe [LNG is] a clean fuel. It ain’t,’ Viking Founder and Chairman Torstein Hagen said last week. From a greenhouse gas perspective, it’s among the worst, he added.

Hagen called LNG a ‘blind alley,’ and noted a lot of money is being spent on it.

Many cruise companies are opting for LNG because it burns much cleaner than other fossil fuels.

Hagen said the problem with LNG is methane.

Indeed, concerns about the shift to natural gas shoreside are increasingly being raised by scientists and environmentalists.

Methane is a greenhouse gas, like carbon dioxide. While CO2 is the pollutant most responsible for global warming and climate change, methane — the main component of natural gas — is a far more potent greenhouse gas than CO2.

‘The lifetime of atmospheric methane is relatively short; most of it dissipates after about a decade. But while it sticks around, methane is more than 80 times as effective at trapping heat than carbon dioxide, which has a lower capacity for heat storage but can linger in earth’s atmosphere for hundreds of years,’ a National Resources Defense Council onEarth column explains.

Carnival Corp. & plc responds that when methane is compared to regular fuel oil, with 100% combustion there is a 28% reduction in carbon emissions.

‘In the type of engines we use (dual fuel), not all the methane is burned during combustion. Around 2% or so passes through the engine into the atmosphere. This is called methane slip,’ said Tom Strang, SVP maritime afffairs, Carnival Corp. & plc.

He noted methane remains in the atmosphere for around 12 years, whereas some carbon stays there for thousands.

Global Warming Potential (GWP) is used to compare how much heat a gas traps in the atmosphere relative to CO2 and is typically calculated over a 100-year period.

Not the final solution

‘We recognize that fossil LNG is not the final solution for decarbonization, but it solves all local pollutants such as SOx, PM and NOx and is the cleanest fuel with no visible emissions widely available, and offers a significant carbon reduction,’ he said. ‘We are also working to reduce the methane slip with the engine-makers. When low carbon non-fossil bio methane and synthetic methane become more available, the carbon reduction will be far greater.

‘In our view it is better to take action now rather than wait until a better solution is available.’

MSC Cruises thinks LNG can be a long-term solution as bio/synthentic methane are scaled up. Those can serve as low or zero net greenhouse gas ‘drop in’ fuels in these same ships in the future, improving on the current reduction of up to approximately 20% CO2, ‘which is far more beneficial than waiting potentially decades for other more perfect solutions,’ according to Bud Darr, EVP maritime policy and government affairs, MSC Group.

He said MSC is also taking steps to mitigate methane slip, including working to develop a purpose-built coupling and decoupling mechanism and a double-walled hose, among other measures.

‘This is in stark contrast to the highly unlikely practical application of hydrogen on a large scale, which has extensive major technical obstacles,’ Darr said. There’s no magic-wand solution, he added, and MSC’s approach includes fitting its LNG ships with cryogenic tanks that give the flexibility to potentially also use other innovative fuels, such as ammonia, as they enter the market.

With no one-size-fits-all way to decarbonize, Darr said MSC keeps exploring innovations while making ‘tangible and meaningful progress … We can’t wait and must act now.’

Fuel of the future?

A physicist by education, he’s also Viking’s de facto chief sustainability officer. In the long run, he believes the ideal fuel is ‘likely to be hydrogen.’ Viking is involved in a liquid hydrogen research project in Norway.

‘For hydrogen, the trick is proper distribution,’ Hagen said.