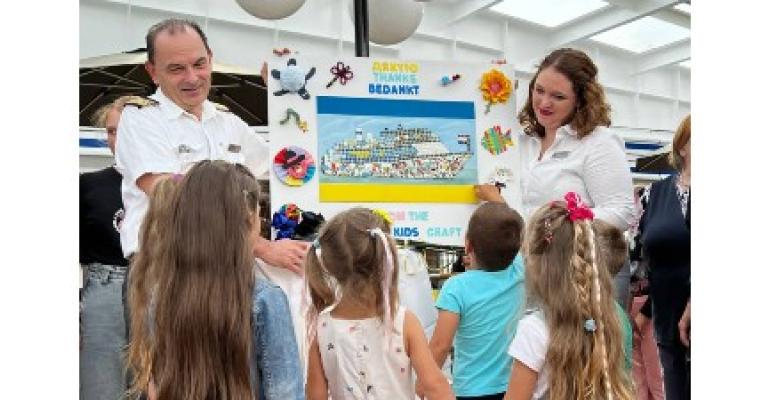 The charter by the city and the government of the Netherlands began in April. For the past six months, the ship has been home to families from Ukraine who fled the war there. Over the past several weeks, the families have been resettling with relatives or moving to more permanent accommodations in the Netherlands.

Volendam is en route to Trieste to embark passengers Sept. 24 for a 14-day 'Holy Land & Ancient Kingdoms Explorer cruise,' its first full voyage since the pandemic shutdown in March 2020.

'It is a bittersweet time,' Capt. Ryan Whitaker said. 'We are sad to see the Ukrainian families leave, but also hopeful for them that this move into more sustainable housing helps them fully adjust into their new life in the Netherlands.'

On Aug. 30, the Volendam team hosted an event at which the families thanked the city of Rotterdam, the Salvation Army (which coordinated many of the relief and social services provided to families) and the ship’s crew.

'It was a touching event with a number of the residents from various generations speaking of their experience onboard, and how thankful they were to everyone involved,' Whitaker said. 'It was followed by some of the children singing for everyone in Ukrainian, which was very moving.'

During the event, Hotel General Manager Francois Birarda was presented with a tile picture of Volendam made by the children, 'which will provide a lasting memory of our mission here in Rotterdam,' Whitaker said.

The charter, funded by the government, was part of the Netherlands’ larger commitment to accommodate up to 50,000 Ukrainians. The Salvation Army and ship team members worked to make the ship feel as much like home as possible. Crew who speak Ukrainian were added to the team, children’s play areas were created on deck and the entertainment stage was transformed into a creative learning area. Many of the adults found jobs in Rotterdam and the children attended local schools.

To commemorate the charter, Holland America Line is working to build a permanent display with mementos and artwork created by the families, so that future Volendam passengers will know about this important episode.

'We should never take anything for granted'

'At any given moment life can change so fast, and we should never take anything for granted,' Birarda said. 'There’s a lot of pride on Volendam in being able to play a small part in the Dutch government’s relief effort. We all have so many stories to tell about our very special guests these last six months.'

Whitaker praised his crew for their 'amazing job' but gave special praise to the Salvation Army and municipality of Rotterdam who 'worked tirelessly to look after the needs of these families, and they will continue to do so long after the Volendam returns to showing our guests the world.'

This story is based on a Holland America Line blog post