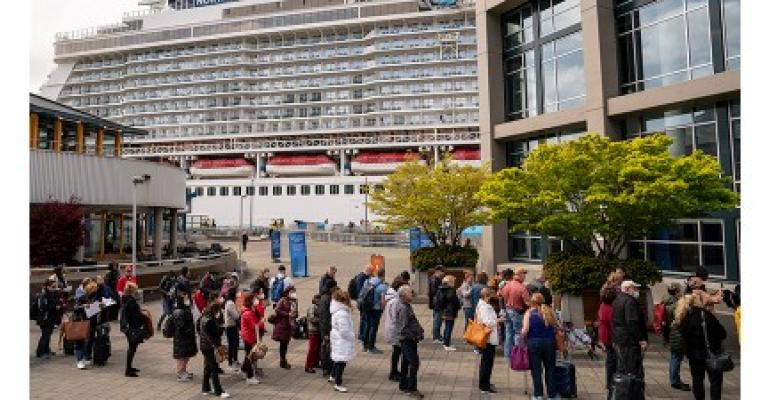 Some 640,000 individuals, or 1.28m revenue passengers, cruised from the Port of Seattle this season, a new record

The final cruise was Norwegian Encore's departure from Pier 66.

'In 2020, when the port and region lost the expected revenue of an entire cruise season, we outlined a recovery strategy to bring the industry back healthier and stronger than ever,' Port of Seattle Executive Director Steve Metruck said. 'This successful season and the remarkable progress on environmental initiatives is a testament to the resiliency and professionalism of the cruise lines, local leaders, labor partners and so many others who keep cruise running efficiently.'

Demand for the Alaska itinerary and Seattle remains very high, indicating strong economic activity potential for the 2023 season. While slightly fewer ships will sail from Seattle in 2023, occupancy is expected to increase to an estimated 85% next year. Preliminary forecasts call for 650,000 cruisers, or 1.3m revenue passengers, with the season potentially stretching from April 15 to Oct. 30.

'More passengers means significantly more economic activity in our region,' said Stephanie Jones Stebbins, the port's maritime managing director. 'For local businesses that means more revenue for jobs and wages. The port directs additional revenue right back into our community and maritime industries. This year, I am especially proud that we were able to nearly double our investment in youth maritime workforce development.'

The faster-than-expected recovery of the Seattle-Alaska cruise itinerary allowed the port to add another $2m in funding for its Youth Career Launch Pilot program, now funded at $4.1m for the next three years. As it has for the last several years, strong cruise revenue also allows the port to make long-term investments that anchor maritime industrial jobs and maintain waterfront parks and shoreline habitat, including new Duwamish River People’s Park.

According to the Port of Seattle, cruise-related spending supports nearly $900m a year in local economic activity and approximately 5,500 local jobs.

Seattle and the Seattle Southside region saw dramatic recoveries in tourism activity this year. Year-over-year hotel occupancy in downtown Seattle improved 67% in May and 63% in June. Visit Seattle President and CEO Tammy Blout-Caravan attributed the gains to cruising's resumption.

'The tourism industry, after suffering devastating blows for the last two years, flourished this summer. This is due in no small part to the return of a full cruise season,' Blout-Caravan said. 'Passengers staying prior to and after Alaska cruises have been the key to survival for so many small businesses that make up the fabric of our culture and our community’s vibrancy.'

'Cruise passengers and crew members found the Seattle Southside’s hotels perfect for the pre- and post-cruise accommodations,' Everton said. 'The proximity to SEA airport and the ease of using the light rail to explore downtown is a great combination for cruise guests. The additional cruise guests in our region also boosted restaurant and retail spending.'

'Cruise means big bucks for downtown workers and businesses, and boosts our city’s health and vibrancy,' said Jon Scholes, Downtown Seattle Association president & CEO. 'The cruise industry reinforces downtown’s strengths while filling our waterfront with life and distributing a host of benefits to our community.'

As earlier reported, the Port of Seattle — alongside Alaskan and Canadian port communities, cruise industry partners and environmental experts — launched a collaborative effort to explore the feasibility of a fully decarbonized maritime green corridor. The concept of shipping green corridors emerged from the Clydebank Declaration at COP 26 in Glasgow.

This first cruise green Corridor is aimed at accelerating maritime decarbonization through the deployment of low and zero greenhouse gas emission solutions between Alaska, British Columbia and Washington.

The first movers are working toward finalizing a charter and the scope of a feasibility study to help identify opportunities, barriers and next steps.

The Port of Seattle plans to advertise a major works contract for the electrification of Pier 66, a key enabler for the green corridor effort. Once this is complete, all the port's cruise terminals will be shore-power-ready. The Pier 66 connection estimated to reduce annual greenhouse gas emissions by 2,700 metric tons when complete.