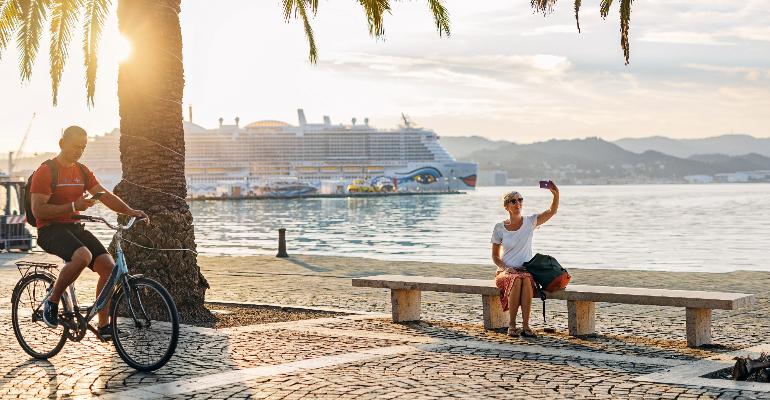 AIDAcosma will operate a weeklong ‘Mediterranean Treasures from Mallorca’ itinerary, attractive for families

At the start of the year, AIDA Cruises recorded the most successful booking weeks in its history and cited strong demand for the season ahead.

Sales are open for the line’s itineraries through to autumn 2024.

Stated president of the cruise line, Felix Eichhorn, ‘We are seeing very strong interest for AIDA cruises across all channels. The record level of bookings covers the entire cruise program for 2023 and beyond.’

He added, ‘We are delighted that the AIDA fleet is on top of so many people's minds…’

Destinations in the Adriatic Sea, Arabian Gulf, Canaries, Caribbean and Mediterranean are featured, some with flight options, as well as a number of sailings to Norway, Sweden, Denmark, London and Scotland.

AIDAaura will operate its farewell season from southern Africa to the Arctic Circle.

Until late summer, the Elbe will be a starting point for voyages to destinations such as Norway, Greenland, Iceland, Ireland and Scotland, through the Bay of Biscay, to the Lofoten Islands, the Orkney and Shetland Islands, and more. Sailings to Norway may include the North Cape.

From the German ports of Hamburg, Kiel and Warnemünde, passengers can visit popular spots in Scandinavia, including Copenhagen and Stockholm, Gotland and Gdansk/Gdynia. Short three- to five-day cruises are available from the three German ports.

The Western Mediterranean’s cities and islands can be discovered on AIDAstella’s 10-day voyages.

AIDAblu will sail the Adriatic coast from/to Corfu in seven days, taking in the cities of Zadar and Dubrovnik as well as Kotor and Bari.

AIDA described its seven-day voyages from/to Kiel onboard AIDAnova to Norway and Denmark, as well as AIDAcosma’s week-long ‘Mediterranean Treasures from Mallorca’ as attractive options for families.