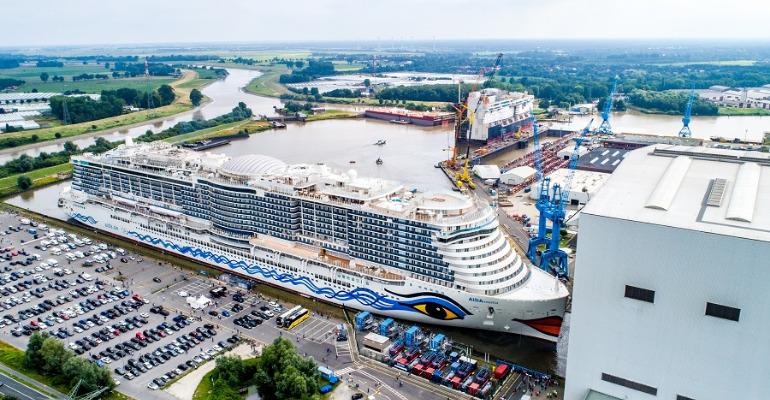 Details of a further Sphinx-class ship operating from Kiel commencing August 15 have also been revealed by the line.

AIDAcosma left Meyer's covered newbuilding dock on the morning and was transferred to an outfitting pier, where work will continue.

AIDAcosma will remain at Papenburg for a further three months for the mounting of its funnel and masts, as well as interior outfitting.

The transfer along the River Ems to the North Sea is scheduled to take place in October in preparation for subsequent outfitting works and sea trials. Its christening and handover are set to take place in December.

AIDAcosma winter sailings in the Med

AIDAcosma will depart from Hamburg bound for Las Palmas de Gran Canaria on December 22, commencing seven-day itineraries around the Canary Islands before being repositioned to the Mediterranean in mid-April.

The ship will then sail seven-day cruises from Palma de Mallorca and Barcelona to Mediterranean destinations.

Sailing Saturdays until October 23, AIDAprima will call Gothenburg, Visby and Stockholm with an overnight stay in the Swedish capital.

In the Mediterranean, AIDAperla is scheduled to operate two seven-day itineraries from Palma de Mallorca until October 30: one takes the vessel to Cádiz, Malaga, Cartagena and Barcelona, while the other calls at Alicante, Ibiza, Valencia and Barcelona.

Both itineraries can be combined to form a 14-day cruise.

AIDA Cruises will boost its presence in Mallorca with AIDAstella, scheduled to conduct 10- and 11-day itineraries out of Palma from July 29 until October 21.

The vessel will call Barcelona, Civitavecchia (Rome) and Marseilles, among other destinations, plus the islands of Corsica, Sicily, Malta and Ibiza.

AIDA Cruises will deploy another Sphinx-class ship from Kiel, August 15 through October 14, owing to ‘high demand’ for voyages from northern German ports.

AIDA Cruises began sailing from Kiel in May with AIDAsol.

Itineraries may, therefore, be subject to change.

All new sailings are open for booking.