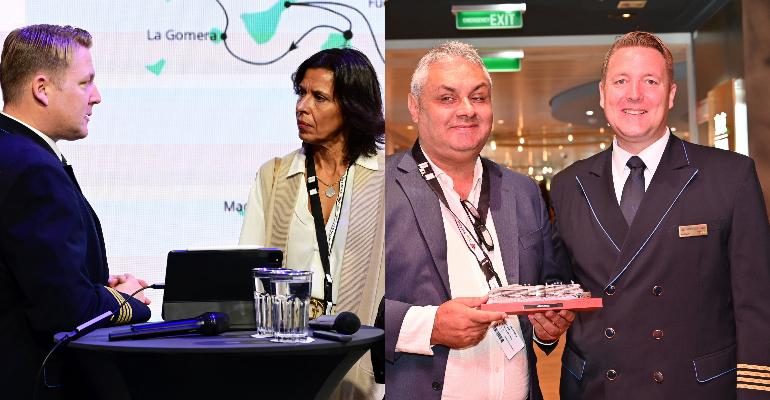 To mark the start of AIDAnova’s cruise season in the Canary Islands and Madeira, AIDA Cruises invited destinations’ political figures and port and tourism representatives to board the ship between November 23-28, to share information on AIDA Cruises’ goals and encourage joint exchange.

Visits onboard the vessel during calls in Tenerife, Fuerteventura, Lanzarote, Gran Canaria and Madeira ‘were very well received by the partners in the region,’ according to AIDA Cruises, which added, ‘They were able to satisfy themselves of the sustainability measures onboard and gained exciting insights into the AIDA world during a tour of the ship.’

Discussion regarding future cooperation has already emerged, with capt.Marc-Dominique Tidow stating, ‘We are happy and grateful to know such reliable partners at our side and look forward to making an important contribution to tourism on these beautiful islands again this season.’

A series of dialogues set to take place

It is a precursor to a whole series of dialogues planned in destinations where AIDA Cruises is set to call, and an indication of the line’s support for more cooperation and open exchange.

AIDAnova will sail the Canaries on seven-day cruises this winter, visiting destinations such as Gran Canaria, Tenerife, Lanzarote and Fuerteventura, as well as the Portuguese archipelago of Madeira.

In mid-April, the ship will then set sail for the Norwegian fjords.

Bergen, Nordfjordeid, Alesund and Stavanger are among the destinations on the ship’s itinerary for the summer 2023 season.