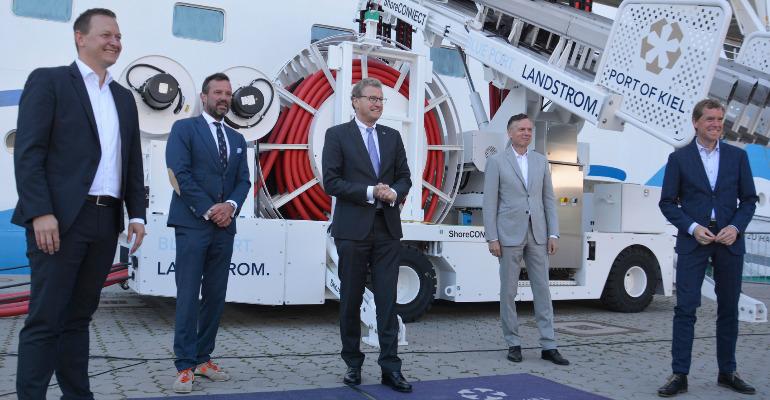 ‘Sustainability, regional value creation and innovation are the focus of our actions,’ declared Thamm. ‘I am firmly convinced that this form of cooperation will also have a signal effect on other ports in Europe.’

His comments followed those of Buchholz, who noted, ‘With this investment, which now enables shore power supply at a total of three locations in Kiel, the seaport should be very far ahead by international comparison. The plant will save thousands of tonnes of CO2 and thus relieve the people in the state capital considerably.'

He added, ‘This shows, once again, that ecology and economy can be well balanced. After all, we want to stay in the game as a cruise metropolis, but we want to do it with the best environmental conditions.’

AIDAsol was the first cruise ship to be connected to the shore power supply system on June 16; the vessel has been utilising it for testing and certification purposes since May 17 and will continue to use the resource moving forward.

The plant has also been supplying Stena Line ferries with green electricity at Schwedenkai since the beginning of the year, saving around 5,000t of CO2 per year. At Norwegenkai, there has been a reduction of 3,000t of CO2 since May 2019, owing to Color Line ferries being connected to its shore-side grid.

‘All inner-city terminal facilities now have a shore-side electricity connection,’ asserted Kämpfer ‘The Scandinavian ferry companies are leading the way in the use of electricity… In this way, we already cover the majority of energy requirements of the ships berthed in the inner city area, emission-free and climate-neutral. We want to continue along this path and are already planning another on-shore power plant for the Ostuferhafen.’

Construction of the plant

Schleswig-Holstein, Kiel, Kiel port and the Costa Group signed a memorandum of understanding for the joint promotion of eco-friendly cruise tourism at the port on April 26, 2018.

The state of Schleswig-Holstein supported the construction of the €13.5m plant with €9m, and successfully lobbied the federal government for a reduction of the EEG apportionment on shore power.

The shore-power plant has 16 MW output and can supply two ships in parallel. In its first full year of operation, the port plans to supply 70 cruise calls with shore power.

‘I would like to thank the state of Schleswig-Holstein and the EU for their financial support for the construction of the on-shore power plant,’ offered Claus. ‘My thanks also go to the Federal Ministry of Economics for reducing the EEG surcharge. In doing so, economic efficiency can be achieved so that the plants are actually used and thus contribute to climate protection.’

He also thanked the Hamburg Port Authority, which has 'paved the way for more climate protection with the pilot plant at the cruise terminal in Altona ... I am pleased that the on-shore power plant has also been designed in an architecturally outstanding way. My thanks go to the architects, construction companies, façade builders and lighting designers.’