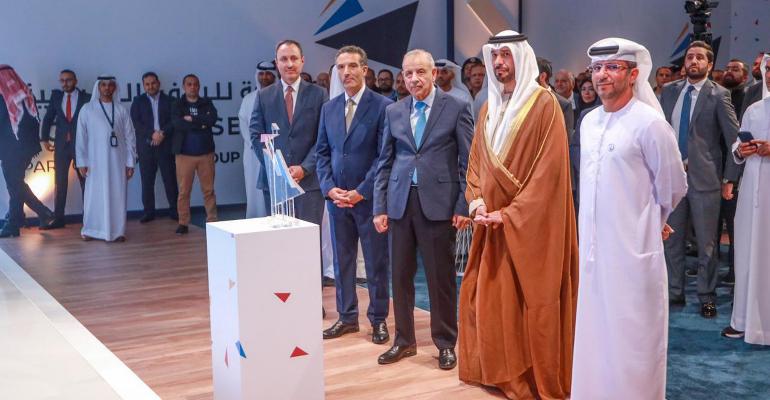 The joint project by AD Ports Group and Aqaba Development Corp. – one of five mega-projects planned between the two companies – is aimed at bolstering the coastal city’s position as a regional tourism hub and gateway for tourists visiting the Red Sea.

Falah Mohammad Al Ahbabi, chairman, AD Ports Group, explained that as the first facility of its kind in the country, Aqaba Cruise Terminal not only offers an 'unprecedented opportunity to tap into the fast-growing cruise industry,’ but supports AD Ports’ international growth strategy ‘by leveraging Aqaba’s pivotal location and vast potential as a regional hub on the Red Sea.’

Similar sentiments were expressed by capt. Mohamed Juma Al Shamisi, MD and Group CEO, AD Ports Group who said the new facility ‘seeks to elevate Aqaba’s travel experience and leverage its prime location and growth potential to attract tens of thousands of international visitors to explore Jordan’s top attractions, thereby adding economic value to the coastal city while establishing its position as a destination of choice in the Levant region.’

Under the agreement with Aqaba Development, AD Ports will develop, manage and operate the terminal, which is expected to receive more than 50 vessels over the next four months.

It is hoped the facility will help to improve processes, procedures and services, making it a more attractive destination for cruise lines and resulting in a higher number of cruise calls and passengers, and boosting the economy.

Mohammed Bin Khalid Al Nahyan and Kreishan took a tour of the terminal and were briefed by Juma Al Shamisi on its amenities. ‘The Aqaba Cruise Terminal is the result of the active cooperation and strategic partnership between the UAE and the Hashemite Kingdom of Jordan…’ remarked the UAE ambassador to Jordan. ‘The UAE is a key strategic partner for Jordan in a number of fields and is keen to propel mutual economic and investment cooperation to greater heights, while building on existing partnerships across different domains.’

Trade volumes amounted to around $3b last year, and UAE investments in Jordan reached over $17b with partnership between the two continuing to grow.

The remaining strategic agreements planned between AD Ports and Aqaba Development relate to ‘Maqta Ayla’ for the development and operation of an advanced ports community system. The system will oversee communication between the Port of Aqaba and terminal operators, as well as the Aqaba Special Economic Zone Authority (ASEZA), Aqaba Development Corp., Jordan Maritime Commission and others within the port’s ecosystem. It is expected to complete around 2m digital transactions per year, generate cost and time savings, reduce CO2 emissions and streamline services.

Nayef Fayez, chief commissioner of ASEZA and chairman of Aqaba Development Corp. who also atttended the inauguration, said ASEZA remains ‘committed to transforming the city of Aqaba into a competitive investment, commercial and tourism destination on the Red Sea,’ adding, ‘Aqaba Cruise Terminal today aligns with these endeavours…’

A further project involves AD Ports collaborating with Aqaba Development on the enhancement of King Hussein International Airport to enable increasing volumes of international and domestic tourism, ensuring a smooth journey for passengers moving between the airport and the cruise terminal.

The modernisation of a multipurpose port is also part of future plans.

Hussein Safadi, CEO, Aqaba Development Corp., at the inauguration with several senior officials from AD Ports and Aqaba Development, said ‘the subsequent digital transformation resulting from this partnership will foster a new ecosystem that significantly enhances the resilience of Aqaba’s maritime sector.’