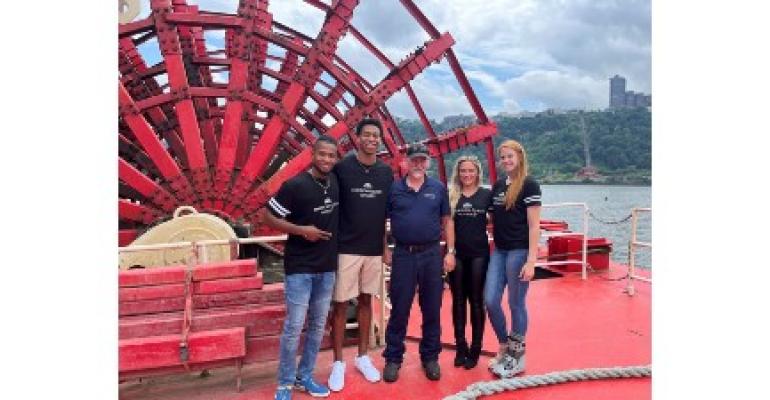 On July 24, 2023, American Countess will embark on a 23-day 'Grand Ohio & Upper Mississippi Rivers' sailing to Pittsburgh from Red Wing (Minneapolis), a vast 1,772-mile route. This cruise will be available in reverse, embarking from Pittsburgh on Aug. 14 next year.

More miles, ports and tours than ever before 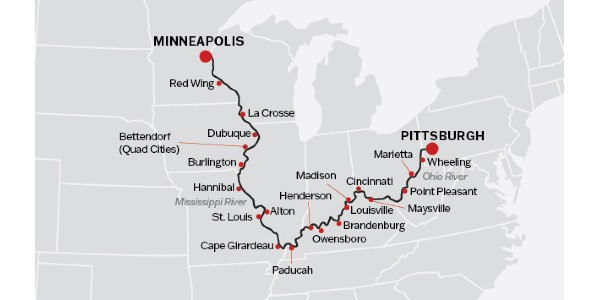 Calling attention to this new itinerary and today’s arrival of flagship American Queen in downtown Pittsburgh, American Queen Voyages partnered with local student athletes, including basketball guard William Jeffress, to welcome the boat and raise awareness about jobs on the world’s largest paddlewheeler.

'Guests have made the 16-day "Mighty Mississippi" voyage between Minneapolis (Red Wing) and New Orleans one of our most popular itineraries, and we are pleased to reveal an even more immersive itinerary sailing to Pittsburgh that now incorporates the Mississippi and Ohio rivers,' said Isis Ruiz, chief commercial officer, American Queen Voyages. 'Pittsburgh has such a rich riverboat and sports history, so announcing the "Grand Ohio & Upper Mississippi Rivers" with the city’s talented student athletes and American Queen in the shadow of Acrisure Stadium [formerly Heinz Field] was a perfect fit.' 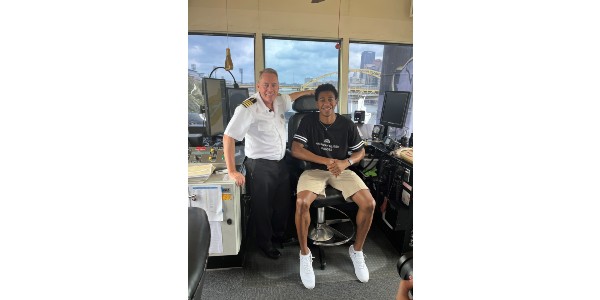 William Jeffress on the bridge with Capt. Greg Brown

The student athletes created content and met with many of the crew to learn about occupations including captain, housekeeper, deckhand, entertainer and purser. Available shoreside and shipboard positions are listed at www.aqvoyages.com/careers/.

'This has been a memorable day for the American Queen crew, who shared their contributions to the US river cruising industry,' said Christina Hobbs, VP human resources, American Queen Voyages, who thanked the athletes for their name, image likeness (NIL) partnership as a way to call attention to recruitment.

The 417-passenger American Queen is currently sailing a nine-day Ohio River voyage between Louisville and Pittsburgh with calls including Madison, Cincinnati, Maysville, Point Pleasant and Marietta. Passengers embarking in Pittsburgh had a pre-cruise hotel night downtown and explored the city.

'It’s great to have American Queen Voyages not only come to the city of Pittsburgh, but to also team with local student athletes in a very unique NIL partnership,' said Sammy Spina, VMG Sports Representation. 'NIL has been a great tool for many student athletes across the country. This is another creative way to make an impact utilizing name, image and likeness to educate others about employment opportunities.'

Premium and included shore excursion highlights range from 'The Field of Dreams Experience' in Dubuque and the National Quilt Museum in Paducah to 'Tracing the Trail of Tears' from Cape Girardeau and the Anheuser Museum and Estate in Kimmswick, among others.