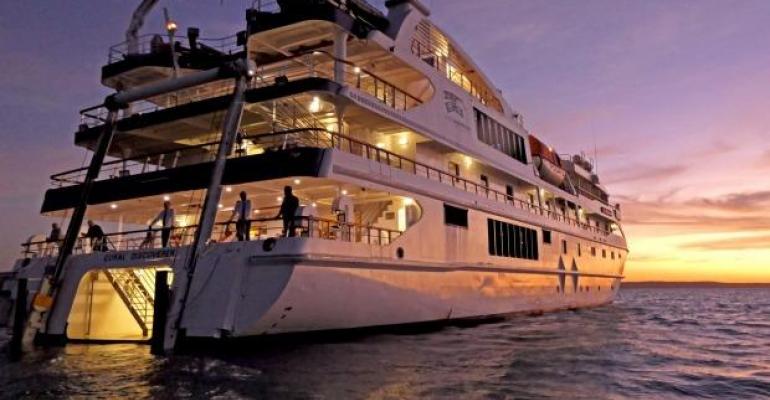 Coral Geographer is scheduled to make three cruises in New Zealand at the end of the year
Cairns-based Coral Expeditions has released New Zealand voyages for December and January following Wednesday’s announcement that the trans-Tasman bubble is ready for take-off.

The bubble allows travellers to move both ways across the Tasman without being forced into hotel quarantine and there is no vaccine requirement.

While the opening of two-way traffic between Australia and New Zealand is for air travel only at this stage, Ann Sherry, Carnival Australia adviser and former chairman who heads the Australian New Zealand Leadership Forum, confirmed that the ANZLF continues to negotiate for the return of cruise ships.

Coral Expeditions Commercial Director Jeff Gillies said the company is in the process of attaining permits and believes its SailSAFE plan will meet New Zealand criteria.

Sherry backed Gillies, saying that, if all the criteria is in place, there is ‘a fair chance’ of getting approval.

It will be Coral Expeditions' eighth season in New Zealand and the first for new flagship Coral Geographer.

On December 27 the 120-passenger Coral Geographer departs Auckland for a 12-night journey to Milford Sound and a coach transfer to Queenstown. En route the ship travels to the wine region of Hawke’s Bay and will access wilderness areas within Marlborough Sound and Fiordland.

On January 8, 2022, she departs Milford on a 14-night journey to New Zealand’s capital Wellington via the subantarctic Campbell and Auckland islands.

On arrival at Milford Sound there is a coach transfer to Queenstown.

Gillies said Coral Expeditions is currently promoting its product in the New Zealand market, encouraging Kiwis to explore Australian regions like the Kimberley, Tasmania and the Great Barrier Reef.