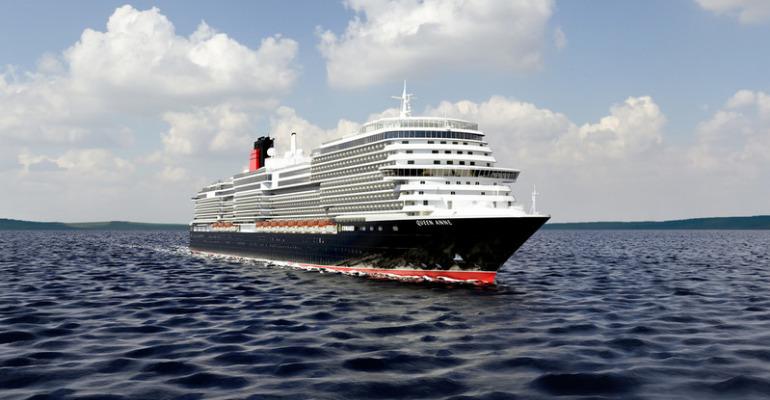 A rendering of Queen Anne, which sails to Lisbon during its maiden voyage

Cunard’s newest vessel Queen Anne will call at more than 32 ports worldwide during its maiden season sailing out of Southampton, with the line also unveiling over 110 international voyages across its entire fleet between October 23 2023 and May 14, 2024.

Said Sture Myrmell, president, Carnival UK, ‘Announcing every new programme for Cunard is always exciting, but this year is even more so, as guests will be able to choose itineraries across four magnificent ships in the fleet for the first time since 1999.

‘In the newly announced programme, each ship offers a unique experience with distinct itineraries with Queen Anne based out of Southampton, Queen Elizabeth out of Australia and Japan, and Queen Victoria and Queen Mary 2 both sailing world voyages, one with a full circumnavigation and one exploring the finest destinations across the Mediterranean, Asia, Australia and Africa.’

2023/24 voyages onboard Queen Mary 2, Queen Victoria and Queen Elizabeth are available to book from May 24 while Queen Anne’s maiden sailings open for bookings from May 17.

Queen Anne’s seven-night maiden voyage to Lisbon starts January 4, 2024 involving an overnight port call allowing passenger’s to visit Lisbon’s UNESCO-listed Belém Tower, the palaces of Sintra and the nightlife of the Barrio Alto. On its return to Southampton, the ship will be joined by Queen Mary 2 and Queen Victoria, marking the first time the these three queens will come together.

On January 27, 2024 Queen Anne will sail a  35-night Eastern Caribbean cruise calling Barbados and St Lucia, among other locations. On March 29, 204 the ship will sail a 16-night Western Mediterranean voyage which includes stops in Lisbon, Cadiz and Rome.

A Northern Europe and an Eastbound Transatlantic Crossing are also included in the ship’s itinerary.

Queen Mary 2 begins the season with an Eastbound Transatlantic Crossing from New York, before setting off from Southampton on a 108-night world voyage.  The liner will sail to the Mediterranean, Asia via the Suez Canal, Australia and return to Europe via South Africa.

Queen Mary 2 departs Southampton January 11, 2024 for Sydney, calling Portugal and South Africa among other destinations during the 47-night sailing that has three overnight port calls.

Following a fly-cruise season in Barcelona, Queen Elizabeth will relocate to Singapore before moving to Australia for a six-night voyage from Fremantle. The vessel will then embark on a series of short break and roundtrip voyages from Melbourne and Sydney, including a Christmas and New Year voyage to New Zealand, a 10-night exploration of Queensland, and a new 14-night voyage calling in the South Pacific.

Whitsunday Islands and the UNESCO World Heritage Site of the Great Barrier Reef are among the natural highlights of Queen Elizabeth’s 10-night voyage to Queensland, departing Sydney January 22, 2024.

On May 14, 2024 the ship operates a 10-night round trip voyage from Tokyo visiting the Southern Islands.

Queen Victoria will commence a 107-night world voyage January 11, 2024 departing Southampton. The ship will sail westbound to North America, including a transit of the Panama Canal, onwards to Australia, Asia, and returning to Europe via South Africa, visiting 32 destinations in total. Highlights include San Francisco and Fiji and overnights in Hong Kong and South Africa.