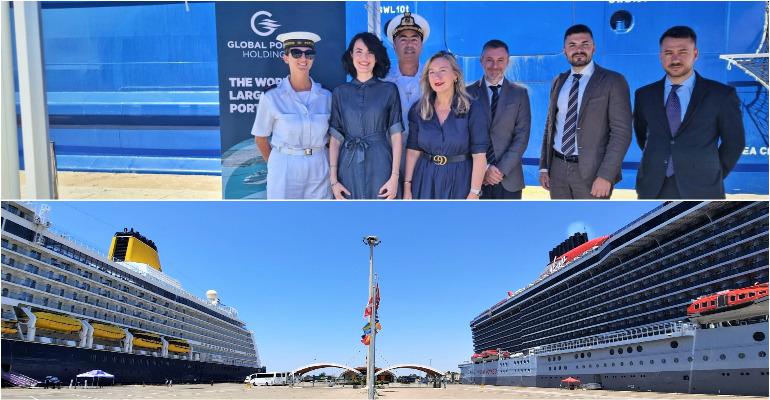 Arriving yesterday, Saga Cruises’ Spirit of Adventure is the latest to call at Cagliari for the first time, with Windstar Cruises’ Star Pride also making its maiden call at the Italian port on June 15 and Seabourn Cruise Line’s Seabourn Sojourn making its inaugural call there tomorrow.

Spirit of Adventure berthed on the western quay of Rinascita pier with Virgin Voyages’ Valiant Lady berthing at the eastern side on the same day. The traditional plaque exchange ceremony that followed was attended by marketing manager for the Port Network Authority of Sardinia Sea, Valeria Mangiarotti, harbour master of the port Mario Valente and representatives of Cagliari Cruise Port and Italmar Sardinia.

The 999-passenger ship was delivered to the line from Meyer Werft, Papenburg in September 2020 but the pandemic prevented its debut until July last year. The vessel is now concluding its first year of operations.

President of the Port Network Authority of Sardinia Sea, Massimo Deiana, said a major goal had been achieved in attracting three maiden calls within three days, expressing positivity towards Valiant Lady’s multiple calls in Cagliari and Olbia, too. ‘Even if we won’t reach the record numbers of the past years, we have nevertheless achieved the important goal of attracting new cruise lines to our ports, a trend that will allow [us], in a short time, to further amplify the appeal of the Sardinia System and open a new growing season for the market,’ he said.

The Port Network Authority of Sardinia Sea, of which Cagliari belongs, is a member of MedCruise.

Stephen Xuereb, president of Cagliari Cruise Port, said investment is needed at the port to attract further cruise lines, explaining, ‘To increase the appeal of Cagliari, however, it is necessary to invest in the development of the port facility, planning interventions such as the expansion of the cruise terminal – necessary to meet the numerous berthing requests already received for future seasons – and the subdivision of traffic, so that the whole area of the old port is dedicated to the reception of cruise ships.

‘The collaboration with the Port Authority, we are sure, will allow us not only to achieve our business goals, but also to give Cagliari its well-deserved role as a cruise destination of excellence in the Mediterranean landscape.’

He went on to add, ‘...We are excited about these maiden calls, which show how more and more luxury cruises are being welcomed in Cagliari. It is a category of cruise lines with smaller ships, easy to accommodate in our large quays, but with a more demanding clientele, and their presence in our port demonstrates that the city and its territory are able to respond properly to the requests of this precious market.’

Cagliari port said the maiden calls are indicative of the post-pandemic recovery, as well as ‘intense and incessant promotion work carried out in synergy by Cagliari Cruise Port, the Port Network Authority of Sardinia Sea and the Municipality of Cagliari.’