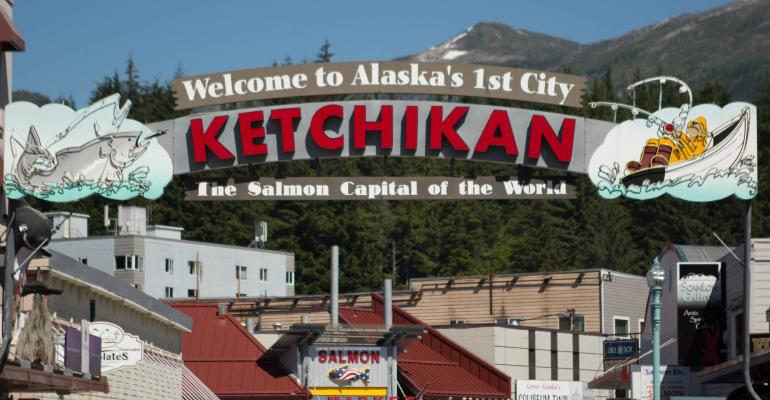 Seattle's economy is impacted by Canada's decision to ban cruise ships for another year but the region's leading homeport warned the effect on port towns in Alaska could be 'cataclysmic.'

'We respect the decision by the Canadian government to continue the suspension of cruise vessels in their waters. This impacts our homeported cruises which would stop at a Canadian port, per the Passenger Vessel Services Act, on their Alaska itineraries,' Port of Seattle said.

'There remains a possibility of a limited cruise season in Seattle this year, nonetheless, the health and safety of our community comes first, and we await further guidance from the US Centers for Disease Control. We will continue working closely with federal and local officials and our industry partners to implement the latest health and safety requirements to support a safe return of cruise. When it is safe to cruise Seattle will be ready.'

Seattle said the safe return of cruising matters not just to the port, but to the 5,000 people who make income on it each year. Each homeported vessel brings in over $4m to the regional economy, $14.5m in statewide taxes and generates nearly $1bn in business activity over the whole season.

Given the projected impact on Alaska, the Port of Seattle urged federal leaders to consider relief for all communities affected by the declines in travel and tourism. 'These opportunities matter as we seek an equitable economic recovery,' the port said.

Mark Ittel, SVP ports and maritime for Bermello Ajamil & Partners, which consults for Ketchikan and Skagway, agreed the loss of a second cruise season could be dire for the smaller Alaskan communities.

It would be tragic enough if tour operators and retailers went out of business, he said, but this has a knock-on effect for residents in essential jobs like teachers, medical staff and firefighters.

'Once they leave a small community like Skagway, they don't come back,' Ittel said.

Another issue, should businesses close and jobs be lost, is how the cruise industry could restart in 2022 without the necessary local workers and support infrastructure in place.

'If the cruise industry is going to put the capacity in that they anticipated this year and more in 2023, it's not going to work,' Ittel said. Capacity for some 1.5m to 1.7m passengers is projected.

Another concern among Alaska communities if businesses fail is that outside investors could take over properties so the towns themselves have less revenue and control in the future.

'I love Alaska,' said Ittel, who first worked there in 1986 as a cruise ship employee and has maintained strong ties ever since. 'The people are great — hardworking and extremely smart in what they do. They love where they live. It's hard to watch them struggle.'

He's heartened, at least, that cruise lines intend to open their lodges this summer and suggested people can support Alaska by taking land vacations.