Cruise leaders highly optimistic for US restart this year 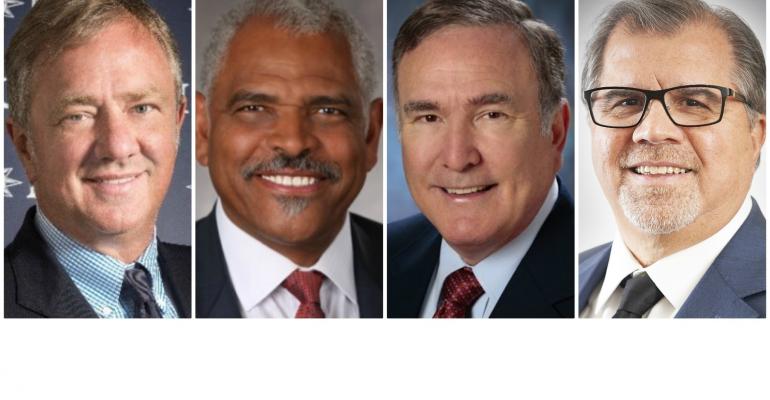 Optimism on US restart from 'State of the Global Cruise Industry' keynote. From left, Pierfrancesco Vago, Arnold Donald, Richard Fain, Frank Del Rio
Cruise line leaders voiced optimism about sailing from the US this year with many safety layers in place and a commitment to 100% testing of all passengers and crew.

They pointed to the largely successful slow, gradual resumption of cruising in Europe, the numerous science-based protocols emerging from the recommendations of the Healthy Sail Panel and other experts and a commitment to universal testing as reasons for their optimism.

'We're at an important tipping point,' said Fain, chairman and CEO, Royal Caribbean Group. 'How much we've learned, how far we've come in six months. The time seems right. All the forces are coming together.'

Announced today, testing of all passengers and crew has been agreed to by all Cruise Lines International Association member lines worldwide, expanding the industry's earlier commitment to universal testing for all lines subject to the US no-sail order. CLIA President and CEO Kelly Craighead said this applies to ships with the capacity to carry more than 250 people.

The cruise industry is the sole travel entity — and perhaps the only industry of any kind — to stand behind 100% testing, Fain said.

'Everybody's talking about vaccines. Vaccines won't be the magic wand. Vaccines will be part of the solution, but testing will be the solution,' said Vago, executive chairman of MSC Cruises, which resumed sailing in mid-August from Italy.

Things have gone well during a gradual startup and passengers rate their experiences highly.

Still, should infections occur, it will be possible to isolate and care for anyone who's sick and let others go on with their lives (and vacations), according to Donald, president and CEO, Carnival Corp. & plc.

'Government resources will not be needed to deal with it because we have accounted for it,' Fain added. 'We can isolate [COVID] without inconveniencing our guests, our crew and, very importantly, the societies we visit and their governments.'

He also asserted cruise ships have the technology to do contact tracing better than elsewhere.

60 days to get an NCLH ship back into service

The CDC's no-sail order and CLIA's voluntary suspension of service go through October, which raised hope cruises may be able to start in November. But yesterday, Norwegian Cruise Line Holdings said its three brands would delay through November.

During the 'State of the Global Cruise Industry' session today, NCLH President and CEO Del Rio explained it takes time to start up a ship, especially if it's been laid up for six-plus months.

'It is not turning on a light switch,' he said. 'We have to repatriate crew. We have to install the different technologies and the 74 recommendations from the Healthy Sail Panel.'

Certainly the No. 1 obstacle is the no-sail order, but there are others, Del Rio noted. In the case of the NCLH brands, it will take at least 60 days to get a ship back into service.

'This is not a race,' Del Rio continued. 'I'm in no rush to be the first one out of the gate. I want to do things correctly.'

Calling his optimism level about restarting this year 'very high,' Fain concurred: 'But we're not going to do it until we're all confident that it's safe and healthy ... The 74 recommendations of the Healthy Sail Panel give us confidence, along with what has happened in Europe.'

Asked if the highly reported shipboard outbreaks and quarantines of the spring would have a lasting impact, Del Rio didn't think so.

Bookings are strong, he said: 'That we are booking as much business as we are booking for the future shows the resiliency.' He noted Oceania Cruises had just racked up its best holiday sale (Labor Day) in the line's history, while Regent Seven Seas sold out its 2023 world cruise within a week of launching, a first.

'Cruising is going to come back strong,' Del Rio predicted.

Yet the speakers agreed there's still lots of work to be done, with agencies and government entities within the US and beyond, throughout the Caribbean, as well as other cruise regions including South America, Australia/New Zealand and China.

They stressed their efforts are collaborative, with lines working together on all the health safety measures.

Since newbuilds are the ultimate sign of confidence in cruising's future, the executives were asked when they would order next.

Nobody's in a position to do that now, of course, but Del Rio said that with nine new ships coming for his three brands, the next most likely order would be for Regent, continuing a series whose last delivery is in 2023. In contrast, the next newbuilds for NCL and Oceania are firsts in new series, with the Project Leonardo ships stretching through 2027 and Oceania's Allura class through 2025.

'None of us have canceled ships,' Fain pointed out. 'There's already a long lead time [for deliveries] and these will take a little longer' due to supply chain and shipyard delays. But the industry is not going to tail off, he added.

'We will continue to grow,' Fain said. 'We're getting exceptionally high ratings even with the protocols. The protocols will taper off as the science advances. The industry has a very bright future that will call for growth.'

With 11 ships agreed for MSC Cruises, 'We have enough already on order,' Vago said, adding this is a solid plan that provides for growth.

And at Carnival Corp. & plc, there is 'quite a book of orders' through 2025 already. 'There are plenty on order,' and 'They are going to be needed,' Donald said, because the industry was on a good growth path before COVID and, over time, it will return to that.