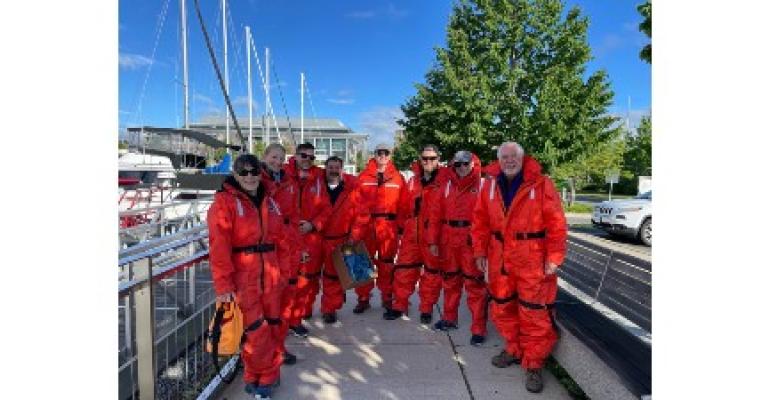 Planners from six cruise lines participated in what's being called a historic exploration of the Lake Superior North Shore Inside Passage.

'This extraordinary and historic navigation exercise took five days to complete and was the first time that a formal commercial investigation has been made of the northern Lake Superior shoreline,' according to Stephen Burnett, executive director, Great Lakes Cruise Association.

Burnett explained the north shore has not seen regular commercial shipping for over 50 years and before the road system was built, the last passenger traffic was in 1942. 'The absence of commercial traffic is one reason for the rugged untouched beauty of this area,' he said.

Burnett stressed the historic nature of their expedition: 'There has been zero commercial traffic along this magnificent stretch of coastline and this exploratory trip has actually kickstarted the process.'

Wearing Mustang dry suits the group traveled in an oceangoing rigid inflatable boat and took an active part in recording this cruising opportunity.

This destination research was planned in 2019 but postponed by the pandemic until last week. It was conceived by Burnett, who leads the Great Lakes Cruise Association, an organisation focused on building cruise traffic for Canadian ports on the Great Lakes.

Capt. Sean O’Donoughue was made available by the Great Lakes pilots to lead and record the navigation, and Capt. Greg Heroux from Sail Superior provided daily local tourism input and outlined the cruise tourism potential along the Lake Superior North Shore Inside Passage.

The journey started in Thunder Bay, Ontario, visiting the nearby Sleeping Giant land mass and the abandoned, submerged mine at Silver Islet, in its day the world's largest silver mine. That was followed by an open water journey to Red Rock, Ontario, and the nearby town of Nipigon to see petroglyphs and hike the Casque Isles Trail, continually charting the depths for cruise navigation inside the many deep water passages of this archipelago.

The journey continued east to the charming village of Rossport, Ontario, and nearby Battle Island where a hike to the working lighthouse was a highlight. The final segment of this exploration was a visit to the Slate Islands with its resident herd of woodland caribou. During the winter months when the straits between the Slates and nearby Terrace Bay freeze over, a wolf pack has been known to cross the ice and hunt members of this herd.

Burnett said the expedition planners were impressed by the extraordinary scenery, the navigable deep water passages and the warmth and curiosity of the residents plus attractions waiting to be discovered.

The trip was an 'eye-opener for the planners and the host team,' Burnett told Seatrade Cruise News. 'We knew we had magnificent scenery, wonderful and unusual attractions ashore. What we did not know was how the guests would react and that was quite amazing.'

Burnett expects at least two new ships coming to the region in 2024.