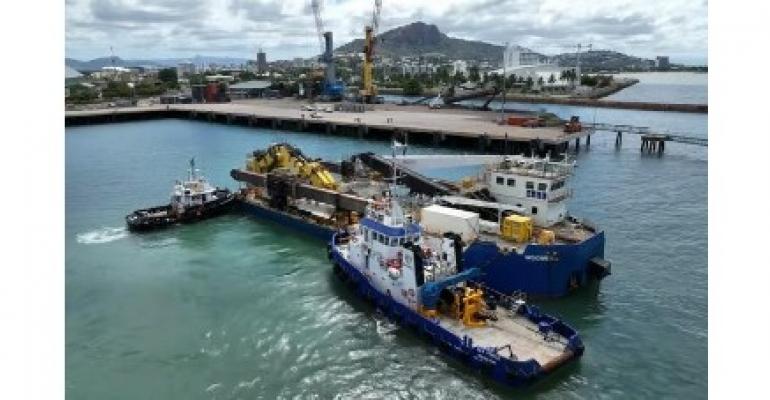 Woomera arrives in Townsville to operate 24/7 for two years

Australia’s largest backhoe dredge has arrived in the Port of Townsville to move 3.2m cubic metres of material as part of the A$232m shipping channel upgrade.

Dredging, which commenced this week, will allow ships of up to 300 metres in length to safely access the port.

Queensland-based Hall Contracting used the backhoe dredge, designed in the Netherlands and known as ‘Woomera,’ when it worked on widening and deepening the Trinity Inlet shipping channel at the Port of Cairns in 2019.

Woomera is a mechanical dredge which uses an excavator to dig. It is a slower dredging method than alternatives, but reduces disturbance to the seabed.

The material removed during dredging will be brought to land for reuse in a 62-hectare reclamation area bounded by a rock wall which was completed by Hall Contracting in 2021.

Woomera will operate 24 hours a day,  seven days a week, weather permitting, for the next two years.

The federal government is contributing A$75m, the Queensland government A$105m and the Port of Townsville A$52m to the project which will help ensure cruise ship opportunities do not bypass Townsville.

In a nod to the cruise industry, Carnival Australia adviser and former chairman Ann Sherry was appointed chairman of the Port of Townsville’s board of directors late last year.

The Australian Cruise Association had planned to hold its annual convention in Townsville for the past two years, but both were cancelled due to COVID-19.

It plans to go ahead with Townsville as the venue for this year’s convention in September.