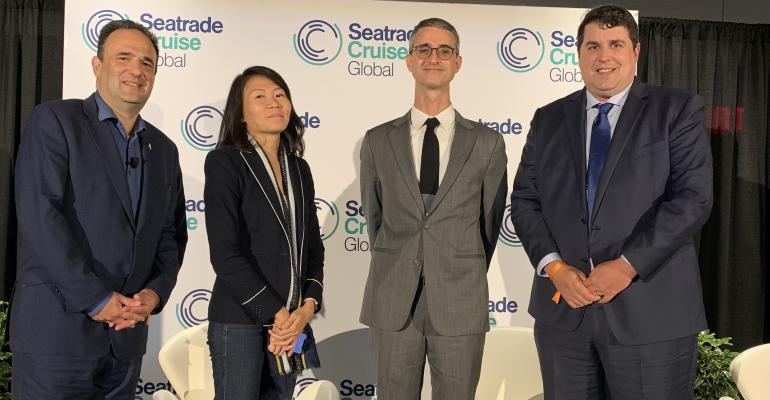 Singapore, Malaysia and Thailand’s easing of pandemic restrictions for arriving travellers is a crucial next step in play for the reopening of Asia’s cruise market and transition from cruises to nowhere to sailings with multiple itineraries.

This was the resounding message from a number of representatives of Asia’s cruise community at Seatrade Cruise Global.

Annie Chang, director of cruise, Singapore Tourism Board said if the dropping of testing for arriving vaccinated travellers at some ASEAN countries is in sync with the rules now implemented by Singapore (on April 26) then it might soon kickstart round-trip cruises from Singapore calling at ports in those countries.

According to Chang, almost a half million people have sailed since Singapore restarted cruises in November 2020, including many first-time cruisers.

Wallem Ship Agency Managing Director Dickson Chin told Seatrade he is confident there will be a regional cruise (with multiple calls) before the end of the year. ‘With Thailand and Malaysia opening up it will spur on other countries to come into the mix,’ he noted.

Cruises to nowhere, on hold during Hong Kong's Omicron crackdown, will be allowed to resume from May 21, but no lines have announced plans to return then.

Cruises to nowhere from Singapore and Kai Tak Cruise Terminal in Hong Kong ‘proved to be the silver lining to COVID,’ noted Jeff Bent, managing director of Worldwide Cruise Terminals, bringing a range of new to cruise customers who saw this as a way to travel safely.

He referenced ‘revenge travel’ springing up with pent-up demand for travel and believes cruise ships provided, and will continue to provide, ‘a perfect platform’ for this.

He said three out of four guests who took the cruises to nowhere from both Singapore and Hong Kong were new to cruising. ‘After ten years of operating out of Singapore the satisfaction scores of these cruises were the highest so far.’

Hong Kong has no resident cruise ships at the moment noted Chin as Genting Dream recently sailed for Singapore and according to some observers could end up sailing from Singapore under Tan Sri KT Lim’s newly formed Resort World Cruises as that vessel is not part of the assets of the liquidated Genting Hong Kong.

Royal Caribbean’s Spectrum of the Seas already repositioned to Singapore  (from Hong Kong) where it will stay until April 2023 and Quantum of the Seas moved from Singapore to Alaska this summer. ‘Maybe she will return to Asia and resume sailings later this year?’ questioned Chin.

Meanwhile Celebrity Cruises cancelled its 2022/23 Asia season on Celebrity Solstice due to uncertainty about when international cruising in the region will fully restart and at this week’s Norwegian Cruise Line Holdings earnings call it was noted the company's Southeast Asia deployment is not due to start until Q4 2022.

Whilst mainland China is lagging behind in opening to international travel, Treacy is optimistic that cruising will be part of the reopening of travel when it comes.

Bent agreed, ‘Up to now China had no skin in the game but next year China-built cruise ships will be entering the market plus there are domestic operators now with owned tonnage and internal (local) advocates which will help push the market forward.’

Further afield in Australasia, international cruise ships will be allowed to return to New Zealand, with the country’s maritime borders reopening July 31 after two years while on April 18, P&O Cruises Australia's Pacific Explorer became the first cruise ship to return to Australia in more than two years when she berthed in Sydney.